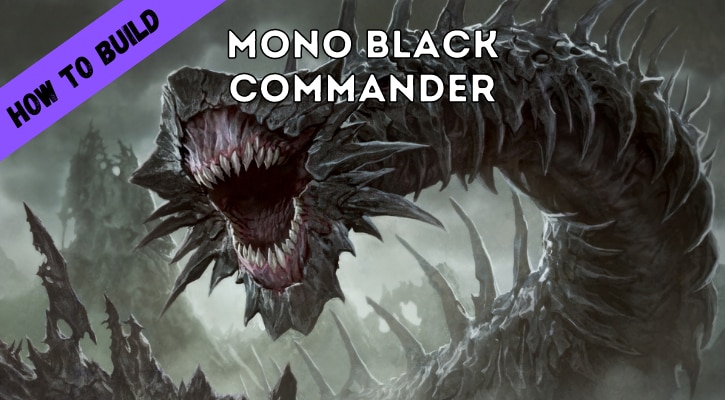 You have access to a great number of versatile tools, and it has access to the strongest removal pieces. There are also a number of unique ways to play mono-Black, ranging from aristocrats to Zombie tribal.

A unique feature of Black, however, is that everything comes at a price – you can expect to have lots of symmetrical effects like Extinction Event, or additional costs like in Blood Divination. Many effects in Black require you to pay life, like Arguel’s Blood Fast.

You can build Commander decks around any theme or strategy, and mono Black isn’t an exception. This article won’t discuss specific strategies, because that’s up to you – the deckbuilder. However, there are three things that every EDH deck needs to be successful:

Let’s dive into some of your best options for each one.

Being in one color means you never have to sacrifice much to play several colorless mana rocks, like Sol Ring, Worn Powerstone, and Mind Stone over colored ones like Arcane Signet. This section will describe some other options available specifically to a mono Black plan.

Black has a number of cards that take advantage of all the Swamps you’ll be playing:

Just make sure you’re playing at least about 24 Swamps in order to make use of these optimally. You can also run Urborg, Tomb of Yawgmoth if you play a lot of utility lands, so they count as Swamps too.

Nykthos, Shrine to Nyx is good in any mono colored deck, but especially in Black because the best Black cards often have multiple Black mana symbols in their mana costs.

There are also a number of ways you can manipulate these lands by using them more than once per turn:

Several other lands are also particularly good in a mono Black Commander deck:

While these don’t get you a ton of mana, they are fantastic utility cards for mono Black:

Finally, Liliana of the Dark Realms is an amazing early play, allowing you to hit your land drops. If you can hit the ultimate before it’s dealt with, you’ll have as much mana as you’ll ever want for the rest of the game.

Mono Black has a lot of powerful utility spells, though we’ll focus on removal. A good mono Black Commander deck needs to be able to take care of the opposing threats.

Some of Black’s best removal are the spells I like to call Murder-on-a-stick, or creatures that kill another creature when they enter the battlefield. These are great because you can use them to attack, or as sacrifice fodder, and are great recursion targets from the graveyard.

The best of these creatures include:

Similarly, there are a number of creatures that cause your opponents to sacrifice a creature upon entering the battlefield. This isn’t the same as targeted removal but can be quite good regardless, especially if you recur them – they can control the board while getting around hexproof and indestructible.

Having plenty of redundancy on these effects can give you a surprisingly relentless amount of control. Here are the best of them:

While Murder-on-a-stick cards are great, Black also has some of the most efficient, versatile, and powerful removal spells:

Black has a number of board wipes at its disposal, making it easy to keep your opponents in check:

Black has some surprisingly good card draw, but like many Black effects, you often have to pay for it. (Whether in your blood or the blood of your creatures.)

Here are some good examples:

Like all colors, Magic has a long enough history that you have a plethora of huge threats to choose from. Many of these can win the game outright if you’re in the right position.

Here are some of the biggest, baddest, meanest creatures in mono Black:

That being said, Black is generally a more subtle color. Unlike Green and Red, it isn’t usually about swinging in with many or huge creatures.

Most of the time, you’ll deal most of your damage slowly and over time, pinging and draining your opponents with a plethora of effects.

One of the things Black is most famous for is draining opponents repeatedly. Death-effects are popular because Black has so many ways to kill creatures.

There are a ton of creatures that deal damage when creatures die:

There are also several other good drain effects you don’t want to miss out on:

It’s very easy to sacrifice your creatures, and either kill or make your opponents sacrifice theirs. There are a number of great effects that trigger on creatures dying:

Typically, some of Black’s best effects require you to sacrifice creatures as a cost. Here are some of the best sacrifice outlets and payoffs:

But in order to make use of these outlets, you need things to sacrifice. The following are a number of cards that are good for repeatable sacrifice:

You can sacrifice any of your Murder-on-a-stick cards in order to recur them later, or you can focus on recurring some of these powerful creatures:

Gaining life repeatedly from cards like Kokusho and Grey Merchant can leave you with a high life total. You can use that to power up something like [/c]Bolas’s Citadel[/c], which can get out of control when you have the life to spare.

To do this effectively, you also require a variety of ways to recur your dead creatures. Here are some of your best options for doing so:

Mono Black Commander decks can be incredibly powerful and versatile. Draining your opponents in the early game and attacking on a controlled board state is a very common way to win out the game. You have more than a few good tools to keep your enemy threats in check in the meantime.

So, what are your favorite mono Black cards in Commander? Let me know in the comments below. In case you need a refresher, here’s a list of Black Commander staples here.

If you’re looking for other mono colored decks, feel free to check the following articles:

Until next time, may you draw as many Swamps as you need, and never more.