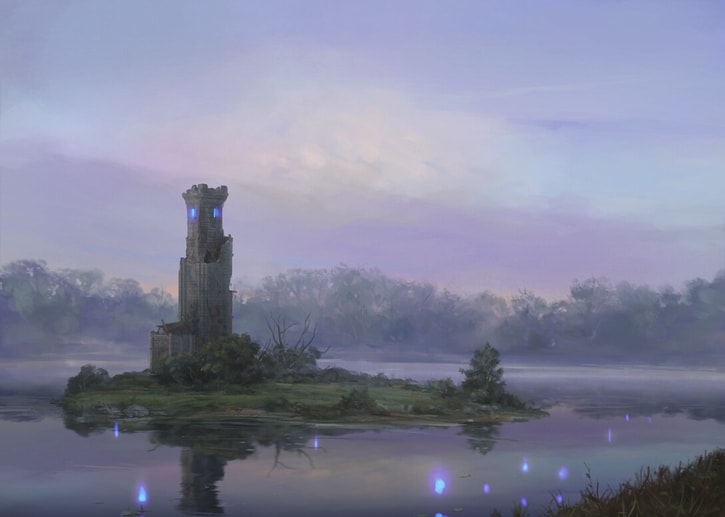 Blue is the best support color in Magic, providing decks with card draw, protection, combo pieces, and finishers. On its own, however, blue struggles to apply the same pressure multi-colored decks do. In this article, I’ll approach a number of methods you can use to make your mono blue Commander deck competitive.

Because Commander is such a versatile format, I won’t talk about specific deck themes or strategies. However, there are three things that every EDH deck needs to be successful:

Let’s dive into some of your best options for each one.

When deciding how to build a mono blue Commander deck, you have to pay attention to your mana base. Being in only one color means it never hurts to include several colorless mana rocks, like:

However, blue is mainly going to ensure it “curves out” through card advantage. This section will describe some of the best options to make sure you draw as much as you need.

Blue is all about drawing cards. So much so that even its lands allow you to either draw or set up draws.

Desert of the Mindful, Remote Isle, and Lonely Sandbar all let you cycle them away if you don’t want them.

Sometimes, you just need to draw a few cards. Maybe you’re looking for a land or trying to get at that card you scried to the top. Opt is the perhaps the fastest method: for one mana, you scry 1 and draw 1 at instant speed. That’s the definition of “quick draw”.

Other great options are:

Many of these give you some selection, either by scrying or drawing several cards and choosing which to put back. This is a great way to sift through your library for what you need.

Occasionally drawing one or four isn’t enough. Sometimes you have a lot of mana to spend and you need to look for combo pieces, finishers, or you just want to draw out your library for a Laboratory Maniac or Jace, Wielder of Mysteries win.

The best ways to do so are:

You could use Enter the Infinite to draw out your whole library, and set up a Thassa’s Oracle win.

Consistent card draw is arguably one of the most powerful, though. Thankfully mono blue Commander has a lot of options. Rhystic Study and Mystic Remora allow you to draw cards when your opponents cast spells.

Deep Analysis and Chemister’s Insight allow you to cast the card once from your graveyard (which also allows you to make use of it if you discard or mill it).

Search for Azcanta transforms into Azcanta, the Sunken Ruin, which allows you to search the top four cards of your library for noncreature spells.

Being able to draw lots of cards is great, but you need to deal with your opponents, too. Here are some good mono blue utility options.

Propaganda is a great prison effect, keeping your opponents from attacking you. Dissipation Field is similar, but also forces your opponents to re-cast or discard their creatures (and is a hard counter for tokens).

Skyline Cascade is one of blue’s many tap effects, and is effectively free to play in mono-blue. Kira, Great Glass-Spinner and similar effects protect your creatures from targeted removal, basically acting like free counterspells.

Speaking of counterspells, that’s what blue is best known for. In mono blue you’re going to be wanting run a good suite of these, because you’re going to depend upon them to get rid of the majority of your opponents’ threats before they even hit the battlefield.

Counterspell is, of course, the most efficient one out there. (You can find the one pictured above in the Signature Spellbook: Jace – check its price on Amazon).

However, we’re going to focus on the counters that give you some added bonus for efficiency. Some let you draw cards:

Some counterspells let you counter abilities as well:

Unwind and Rewind both allow you to untap a number of lands equal to their converted mana cost, potentially setting up another counter.

Desertion gives the spell to you instead of the opponent if it’s an artifact or creature, while Counterlash allows you to cheat out your own spell (no matter the CMC).

There are also a number of counters that let you counter a smaller variety of spells for only 1 mana:

Blue has lots of efficient (but temporary) boardwipes that return nonland permanents or just creatures to their owners’ hands:

Crush of Tentacles and Kederekt Leviathan do the same, but leave you with a big creature on your side of the battlefield. Inundate and Whelming Wave have the chance of being one-sided boardwipes, which is always a very powerful effect.

Imprisoned in the Moon is blue’s best piece of single-target removal, effectively deleting your opponents’ big creatures and commanders, even getting around commander tax and recursion.

Obviously blue has more than enough options to disrupt your opponents, but even Jace himself runs out of counterspells eventually. This section will go over ways to win out the game.

Blue is really good at taking other players’ cards. Roil Elemental is a great example of this, allowing you to steal a creature each turn you play an island.

Blatant Thievery lets you take something from everyone, while some spells let you take things before they enter the battlefield:

Dominate and Entrancing Melody let you pay a creature’s CMC to take it, and Mass Manipulation lets you steal planeswalkers as well as creatures.

Finally, Agent of Treachery lets you steal something and acts as a payoff for stolen permanents.

Blue isn’t especially known for its big creatures, but there are a few tools you can use to get the damage in – because these options are flying, your opponents will have hard time blocking them.

Chronozoa and Reef Worm can get quickly out of control if left unchecked. Keiga, the Tide Star is a threat nobody wants to remove, while some cards have built-in protection:

Inkwell Leviathan and Stormtide Leviathan are monsters on their own, and a nasty pair.

Breaching Leviathan and Lorthos, the Tidemaker clear the board for a big swing, while Deep-Sea Kraken can push through regardless of boardstate.

The following options are some of your best options for providing card advantage while also dealing damage:

Once you have a few of these meanies on the battlefield – or if your opponents have a similarly threatening creature – copy it with Clever Impersonator or Spark Double to make another, or a kicked Rite of Replication to make six more.

You can also take advantage of blue’s plethora of instants and sorceries to swarm the board using cards like:

Then, turn all those smaller tokens into 5/5s with Day of the Dragons, and deal enough damage to kill all your opponents in a single turn.

You can always win with creatures, but mono blue Commander is often all about spells – so how do you win with them? Eye of the Storm and Swarm Intelligence are nasty ways to snowball all your instants and sorceries, though you have to be quick with the former – the effect is symmetrical.

Sublime Epiphany and Cryptic Command are powerful and versatile cards that let you shut down your opponents’ plays and beef up your own. Quicken lets you do some of these plans on your opponents’ turns, making it much harder to deal with.

Blue is very heavy on the protection and counters to your opponents’ plan, so your early game tends to be all about keeping them in check and controlling the board state. Once you have your mana and draws set up you can turn the tide – so to speak – in your favour.

I hope this article gave you some inspiration on how to build mono blue Commander deck , how to beef up your mono blue mana base, utility cards, and game finishers.

If you don’t want to miss new articles, give Card Game Base a follow on Instagram or Facebook. You’ll find new articles, spoilers, Magic memes and Arena codes. Speaking of which, you can find all free MTGA codes here.

Until next time, may you draw as many counterspells as you need, and never more.