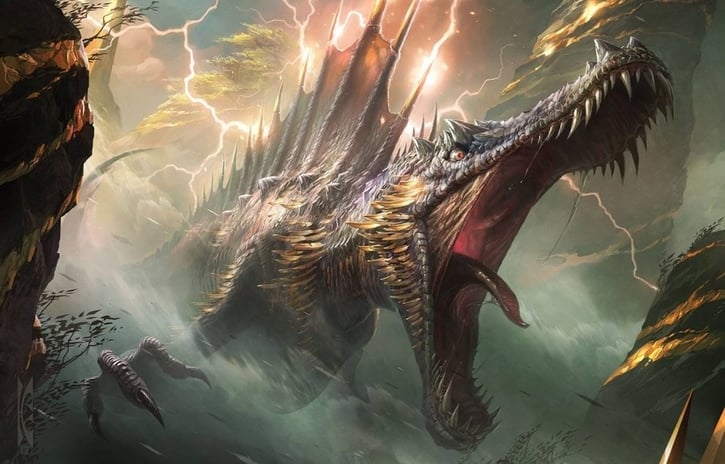 Do you want to learn how build a mono red Commander deck? That’s great because today I’m going to share some of the best cards that you can use to power up your mono Red Commander deck.

Problems With Mono Red in Commander

Mono red can be a very powerful archetype in many formats like Standard and Modern. It’s very fast and aggressive. Therefore you can beat your opponents before they have the ability to form a response. However, Commander is a different beast.

It has double the life total. This gives other decks enough time to defend against an aggressive mono red strategy. Red is weak in defense and card advantage, so once its threats are played out and dealt with, it’s easy to be shut out of the game.

This article will help prevent that from happening. There are 3 things all commander decks need to be successful: a strong mana base, good utility cards, and game finishers. Let’s find out what cards fit in those categories.

Being in only one color means it never hurts to include several colorless mana rocks, like:

However, getting more lands onto the battlefield is something red always struggles with – either you draw them, or you don’t. Some artifacts can help you speed up that process:

If you swap all your regular Mountains with Snow-Covered Mountains, you can also use Scrying Sheets to get some of them onto the battlefield. Once you have a plethora of Mountains, there are a few cards that double your available mana (the Gauntlets also buff your creatures!):

Irencrag Feat is a one-time dump of fast mana, allowing you to get out a late-game threat relatively early. Purphoros, Bronze-Blooded is similar, but repeatable; Fires of Invention lets you cast big spells for free, leaving your mana up for Firebreathing-like effects.

While there are some good options for mana, you need things to do with it, and Red is notoriously poor in card draw. Here are some of your best options in that department.

Endless Atlas and Mind’s Eye both let you draw repeatedly. There are a couple of lands that let you cycle them away, too:

Most of red’s draw effects also require you to discard as an additional cost. Here are the best of them:

One of the best pieces of reliable card advantage is Chandra Ablaze, who gives you cards, lets you replay old spells, and puts dead cards to use. Then, if you want a good all-rounder, Chandra, Torch of Defiance is ramp, card draw, and removal all in one.

The Chandra you see above comes from the Signature Spellbook: Chandra, of course. It includes 8 different red cards, most of which you could potentially use in your mono red Commander deck, so check it out.

Speaking of removal, that is one thing red is very good at. You have a number of options for targeted creature removal:

Sundering Stroke is one of your nice options, dealing 7 damage to each of up to 3 creatures. You also have a number of options available to do direct, versatile damage to creatures, players, or planeswalkers:

Your opponents will usually play tons of artifacts – either mana rocks or utility stuff. Whichever the case, red can definitely take care of them, with cards like:

Of course, EDH often relies on boardwipes. Red also provides you with a healthy number of options:

There are few options to protect yourself in red, compared to other colors. Thankfully, there are still some nice options:

Ruination messes up your opponents’ mana without affecting you – it’s a great tool for mono red Commander deck, if you’re a cruel person.

Red is very susceptible to removal, so it’s important to be able to get in and deal damage fast. There are many cards that give your creatures haste, but these three are some of the best:

Just like any other deck, mono-red needs to win the game eventually. Here are some good cards that can help you do what red is best at: dealing large amount of damage very quickly. They do so in various different ways, so I grouped them in 4 different sections.

Red has a number of ways to temporarily steal opponents’ creatures, letting you activate their abilities, attack with them, or just remove them as a blocker. Bonus points if you can use cards like Barrage of Expendables or Dark-Dweller Oracle to sacrifice them, so your opponents don’t get them back. Here are your theft options:

Finally, you have the best option, which often wins you the game outright: Insurrection.

Etali, Primal Storm is similarly good, although it’s a different type of theft. It steals any spell from your opponents’ library when it attacks.

Aside from making your creatures bigger, red has a number of ways to add or multiply the damage you deal.

Fiery Emancipation is the most powerful, tripling all your damage. Here are some alternatives:

Castle Embereth is a great, low-effort way to buff up a number of creatures on your battlefield.

Getting the most out of your creatures before they get removed is critical for mono-red. Attack with them more than once per turn is an excellent way to achieve this goal. The following are some options for doing so:

Finally, there’s also Moraug, Fury of Akoum from a newer set, Zendikar Rising. You can find the awesome alternate version in the Zendikar Rising Collector Booster.

I would be remiss to finish off with anything but the huge creatures you’ll use to attack during those extra attack steps. Here are some of the biggest, meanest big red cards you can play.

Red is a fast, aggressive color. If you can support and protect it, you can smash your opponents in a most satisfying way. I hope this article has been of some use in that regard.

If you’ll be building a new Commander deck, you might also want to get a new deck box. This way you don’t have to put apart your old decks. Thankfully, the deck box doesn’t need to be expensive to be good. That’s actually the case for most of our favorite deck boxes for Commander.

Do you want to build a mono-colored Commander deck in another color? In that case check some of the following articles:

Until next time, may you mono red Commander deck smash everything that stands in its way.