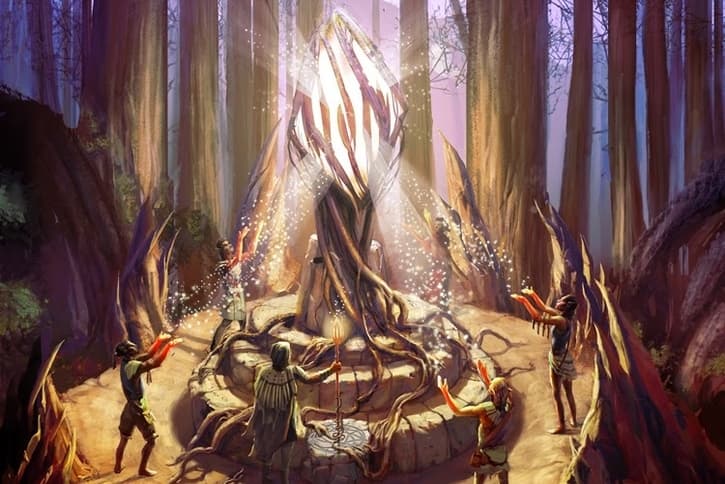 Tribal decks – that is, decks whose creatures all (or mostly) share the same type—are among the favorites of many Commander players. Whether you’re playing the famous goblins or the infamous slivers, tribal decks are a fun way to play casual Commander.

Good tribal decks require a little more care than just throwing many creatures in the 99. This article will provide several tips to help make your tribal decks strong without losing any of their theme.

The best tribal decks are led by a commander who is both of that tribe and useful for the build. Lords, or creatures that give other members of the same tribe various abilities or simply +1/+1, are always a good choice. Some good examples of these are:

Their abilities should make use of the creatures in your build, turning them from ok-drops to bombs, if possible.

Another important consideration is your commander’s color identity. Some tribes, like Elves, are almost entirely restricted to one color. Do you go mono-green with Marwyn, the Nurturer? Or blue-green with Edric, Spymaster of Trest for access to Frilled Mystic and Master Biomancer?

Most tribes have multiple options. Your choice should depend on the creatures you want to use – something we’ll discuss in the next section, Building Your Tribe. Take note of the synergies between your creatures and your commander and work to build around them.

Unfortunately, not all tribes are as fleshed-out. Some lack a legendary creature, or just a playable one. If you aren’t too strict on the tribal requirements, you can choose another creature that fits your color requirements.

You also always have the choice to play Morophon, the Boundless, which gives you access to all tribes and all colors. It is often seen as the tribal cop-out, however, unless your tribe is Shapeshifters.

Tribal decks are, naturally, all about the creatures. But which ones do you include?

Obviously you’ll want the strongest ones that fit within your budget, but especially in Commander you’ll want to prioritize cards that benefit and care about each other. Cards like Goblin Lord, Marwyn, the Nurturer, or Wakening Sun’s Avatar are all examples of synergistic tribal cards.

Creatures with useful abilities like Skirk Prospector or Reclamation Sage can help stabilize your game plan.

Tribal decks are all about overwhelming your opponents through your cumulative bonuses as opposed to the creatures’ individual strengths. Of course, that’s what Slivers do better than anyone, and what makes them the most well-known tribe.

Most tribes have enough creatures to slot into the 99, though some are stronger and more plentiful than others. New cards are also constantly being added to your roster. Minotaurs, for example, weren’t a viable tribe until recently, and just in the past year we’ve seen the introduction of three great such inclusions:

So, keep your eye out on the new Standard sets that could introduce great new options for your favorite tribes.

There are a number of options available to strengthen your tribal decks outside of creatures. If you’re playing mono-color, cards like Heraldic Banner and Caged Sun can give you the edge. Coat of Arms gives you a powerful lord-adjacent effect, and there are many more like it:

Do some research to find some of the less obvious options specific to your tribe – they may not see typical play, but become very powerful in tribal decks.

Crux of Fate, for example, is often a one-sided boardwipe in a dragons deck, while the following cards become far better in any deck whose creatures are mostly flying:

Some strong options are even less overt. Simple cards like Abzan Ascendency can be devastating when you have a board full of 1/1 warriors or soldiers. Descent of the Dragons can turn all your 1/1 Goblin tokens from Krenko, Mob Boss into 4/4 Dragons with flying, winning the game outright (especially with a Pandemonium or Warstorm Surge in play).

Tribal is not necessarily a competitive theme, but that isn’t a bad thing—it’s a fun and thematic way to play casual EDH. Stay creative! Some people have taken the tribal notion a little more figuratively, building Ladies Looking Left tribal or even Hot Dudes tribal.

There are thousands of unique magic cards—take your time to explore and find the most fun ways to play.

There are a number of different methods to building a successful tribal deck, but overall the most important thing to remember is to keep it fun. Maybe it’s not the best card for tribal, but I run Goblin Bombardment in my Krenko, Tin Street Kingpin deck because catapulting (I’m sorry, trebucheting) my Goblins at my enemies is hilarious.

Here are some more tribal articles that you might enjoy:

Until next time, have fun with your Commander tribal deck!

1 thought on “How to Build Tribal Commander Decks”