Skip to content
Home → Strategy → How to Draft Gyruda, Doom of Depths 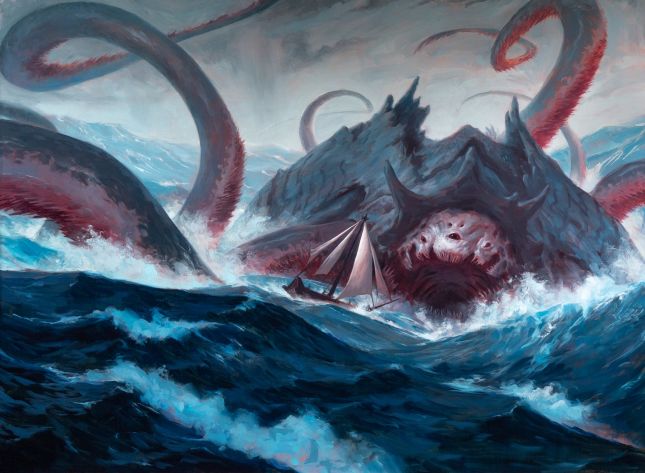 So you opened Gyruda in your draft and want to know if you should go for it? Wondering how to build a draft winning deck around Gyruda? This article will help you with all that, so let’s get right to it.

Is Drafting Gyruda Worth It?

Short answer – yes. Long answer – yeeeeeeees. Joking aside, it’s really good to begin a game with an extra card in hand. Especially one so good as Gyruda, Doom of Depths.

You don’t get just a 6/6 body for 6 mana, but also another creature – most of the time. Gyruda is so powerful, that you really want to play it as a companion.

Gyruda’s restriction isn’t a small one. You won’t play cards that cost one, three, five, seven or nine mana. So what are the things you should do to make it work? First things first, don’t limit yourself to just black and blue. Use the options that hybrid mana gives you and explore other colors.

When you open Gyruda in your first pack, just go for it and draft only even-cost cards.

If you get Gyruda in your second or third pack, it can be harder to make it work. Nevertheless, you should still try. The raw power and consistency of this companion is so high, that you really want to enable it.

As you know, you can’t play one or three drops. That means that your early game is heavily reliant on two drops. Therefore, you really want access to plenty good two drops, so prioritize those over four drops of the same power level.

Something like Facet Reader is really nice, as it gives you something to do with your odd amounts of mana. It’s good even in the late game, when he makes sure that you’ll draw only pure gas.

Even Mutate is Odd

Sure, you can’t play odd cards, but mutate creatures can somewhat cheat on that rule. Take Migratory Greathorn, for example.

Even though it’s technically a four drop, you can cast it with three mana on your two drop. This one is particularly strong since it ramps you – that’s great when you want to play your six drop bomb (Gyruda) on curve.

Other even-cost creatures with cheaper odd mutate cost include:

Playing cards like this uses that one mana, that you otherwise couldn’t use. You know, if you play even-cost cards, every time you have odd amount of lands, there’s one land that you won’t use that turn.

Cycle Through the Gaps

Other way to make use of that one mana is to play cards, which you can cycle for one mana. They don’t even have to be in your colors.

There are 6 even-cost cards, that cycle for one mana in Ikoria:

All of these are fine additions to your deck, no matter what colors you’re in.

Casting Gyruda on turn six is probably the best thing your deck can do. So you want to make sure, that you’ll be able to do so. You don’t want to miss your land drops, so play enough lands.

Usually in this format, it’s correct to go down to 16 lands, once you have 2 cards that cycle for one mana. With Gyruda, you want to stay on 17 lands, even though you have some cheap cycling cards.

On the other hand, if you don’t have much cheap cycling, you should start with 18 lands. An argument can be made for 19, but that’s probably not necessary if you have a good enough curve.

Here’s an example of how a Gyruda deck can look like. This one is probably one of the weaker Gyruda decks. The reason for this is that we got Gyruda in the second pack, so we had to abandon some of our good odd cards to support it.

However, even though a deck is on the weaker side, it can still win a lot of games. Gyruda is just that strong.

Let’s quickly recap what you need to do to draft a Gyruda deck:

Don’t want to miss another article? Give us a follow on Facebook or Instagram. We post whenever we publish a new article. Besides that you’ll also get reminders about Daily Deals on Arena, new spoilers and, of course, Magic memes.

Until next time, have an awesome time and let Gyruda make it even better.