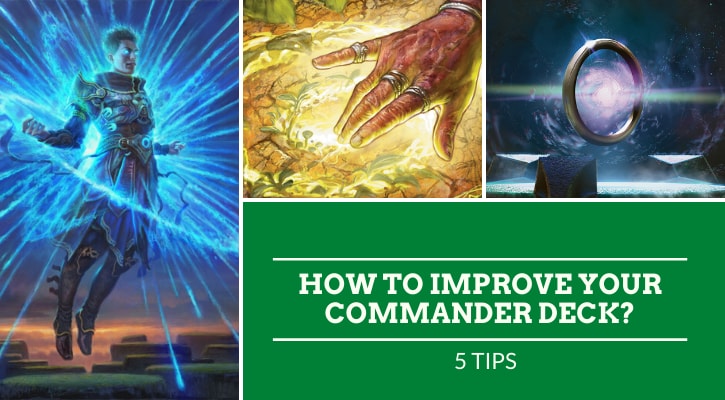 Have you been losing a lot of Commander games lately? Has the joy you once felt brewing decks and jamming games been diminishing? Are you looking for a way to increase the power level of your decks? Wondering how to improve your Commander deck? Well you’ve come to the right place. Here are five tips for building Commander decks that are more fun.

When Commander players want to find ways to improve their decks, for the most part they know how to do it: spend more money, play more tutors, look up more optimized decklists online, watch more Game Knights. This article is not going to tell you to do any of the above things. Rather, let’s talk about a couple of simple things you can do to have more fun building decks and playing games.

Before I get to the actual tips, remember that each deck is unique, so take each of these suggestions with a grain of salt. Consider your decks on an individual basis. Something that makes one deck more fun might not have the same effect on another deck.

Each of these tips will hopefully increase one or more of those factors for you as you upgrade or build new Commander decks. Now let’s get into the actual tips.

1. Focus on One Theme

This tip is first because I think it is more important than any of the others. I have stated in previous articles that I think that synergy is more powerful than power. Three synergistic cards add up to more than that three powerful cards without synergy.

Each deck you build should have a theme. That theme could be an archetype, mechanic, commander, or anything. Whatever you end up choosing, you should fill your deck with as many cards that contribute to that theme as possible.

Separate from your theme, each deck has a few basic needs. You need to include win conditions, card advantage, ramp, removal, etc. If you can, meeting these needs with synergistic cards is better than meeting them with powerful staples. This is because a the cards are able to serve multiple purposes, and be valuable at many points in the game.

Here is an example. Lets say you are building a mono-black Syr Konrad, the Grim deck. Since you are playing black, you might be tempted to play cards like Phyrexian Arena to meet your card advantage needs for the deck.

Finding slots for cards like Village Rites or Altar’s Reap might be better for your deck, though, since they also trigger Syr Conrad’s ability and any other sacrifice pay-off. Similarly, cards like Attrition are better removal options than Doom Blade, because they serve multiple purposes.

Keep this tip in mind as you read through the rest of them. The more cards in your deck that contribute to your theme, the stronger your deck will be in the end. So it’s very important to focus on your theme, in order to improve your Commander deck.

2. Whoever Draws the Most Cards Wins

This tip is not true one hundred percent of the time, but it you can often see the correlation. This is why:

Let’s pretend you get three friends together to form a playgroup for Commander games. Each player takes time to craft their one hundred-card decks, hoping that the combination of those cards can beat everyone else’s decks. However, very rarely do all players get to use each card in their decks.

If we assume that a game lasts ten turns, and everyone draws a single card on their turn, including the seven cards from a player’s opening hand, everyone plays with seventeen randomly selected cards from their one hundred cards. The player who draws the best seventeen cards probably beats the others.

If one of these players drew an additional seventeen cards throughout those ten turns, they would be significantly more likely to win the game. They would have gotten to play with thirty four of their one hundred cards, while everyone else only got to play with seventeen.

Of course, the natural variance of Magic makes it so sometimes you draw the worst thirty four cards in your deck, and still lose to someone who drew less than you. However, drawing more cards mean that you are most likely to find the ones that will win you the game. For this reason, if you draw more than your opponents, you will (probably) win.

3. Whoever Spends the Most Mana Wins

Similarly to the previous tip, this is not always true. But it does give you the best chance of being able to win.

Let’s assume again that you are playing a game that lasts for ten turns. If every player plays a single land and no ramp for each of those turns, they will have had a total of 55 mana available for them to use throughout the game. Whichever player is able to most efficiently utilize all of their mana will have the best chance of beating players who leave mana on the table or use their mana less efficiently.

If one player uses their turn two of the same game to cast a Rampant Growth, they will have an additional mana available to them for the rest of the game. This means that they have a total of 63 mana that they could use, while their opponents only have 55. A turn one Sol Ring yields a whopping eighteen additional mana to that player in a ten turn game. As you can see, ramping early on gives you a powerful advantage over the course of the game.

Obviously, this mana would not be available all at once. Also, you would not necessarily cast a single spell with your available mana each turn. But if you are the player who is able to use the most amount of mana (with your efficient spells as well as your ramp), you will have the best chance of winning that game.

4. Whoever Stops Their Opponents From Winning Wins

This tip is a bit of a can of worms. I don’t mean to say, “play more stax decks.” Nothing against stax decks, but your friends might not like playing against them every Commander night. Rather, this tip could be rewritten to say, “Play more removal spells.”

No matter how well your deck is performing, it is always possible for an opponent’s deck to perform better. It can be very frustrating to have victory snatched from your grasp because you just needed a little more time. Removal spells, or any kind of interaction for that matter, can help thwart your opponents long enough for you to close the game out. After all, you can’t win if you have already lost.

Sometimes it is tempting to try to jam as many of your favorite cards in your deck as possible, neglecting removal. I believe this is a mistake. You need to find a balance between furthering your game plan and interacting with your opponents. I previously mentioned choosing as many synergistic cards as possible. Removal spells are no exception. If you choose removal that synergizes with your deck theme, you don’t even distract from what your deck is doing to be interactive.

It is important to be prudent with your removal. If the amount of removal in your decks impede your playgroup’s fun, you might want to play fewer removal spells. Specifically, too many counterspells or board wipes can annoy opponents. Find out how much removal your playgroup is comfortable with and play as much as possible within those boundaries.

This tip is simple, but if you find more slots for interactive spells, you will notice an increase in your win rates.

My last tip is not a deckbuilding tip. It might take more time and care. Fortunately, I think it is one that most players would be happy to do.

Sometimes, when you build a new deck, it performs poorly. Whether you had a bad draw or need to fine tune it some more, it can be frustrating if the first few games don’t go as planned. Be patient when this happens.

Try to make improvements. When you’re doing badly, think, “What card (or kind of card) would make this situation better?” Put those in the deck later on.

Be willing to change the deck after play testing. You might find cards that don’t contribute very well to your theme. Getting rid of those cards could make the deck better. Along those same lines, you should have a good reason for including all the cards in your deck.

Go through every card and ask yourself, “Why is this in the deck?” The reason could be as simple as, “I can’t afford a better version of this card” or “I just really like this card.” Whatever the reason, be intentional about what goes into your decks. This way you’ll easily improve your Commander deck.

I’ll Get the Tip

I hope these tips help you build better Commander decks going forward. Let me know in the comments which decks you upgraded with my suggestions and if you started winning more. If you want more Commander content, check out these articles:

You can find more of me on Instagram or Twitter. Until next time, have fun, and enjoy your Commander games.