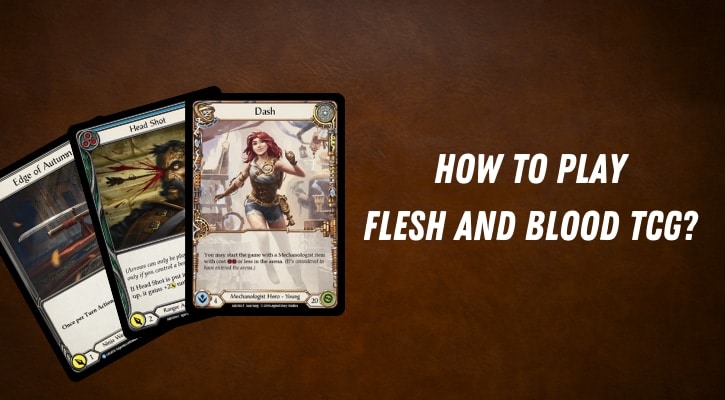 In this article, I’ll discuss how to play Flesh and Blood. I won’t go into every detail, as they are described very well in the official rule book (called Hero’s Handbook). Instead, we’ll talk about the main aspects of deck building and gameplay. This way you’ll quickly get the general idea of how the game works, and which thing you have to pay attention to.

Flesh and Blood is different from many TCGs in two significant ways. First, gameplay focuses around your hero and your opponent’s, and your deck serves as support for them—your hero does the heavy lifting. Secondly, you don’t start slowly and build your resources throughout the game, you begin in the thick of the action. Over the course of the game, your resources deplete as your hero becomes exhausted.

You win in Flesh and Blood when you reduce your opponent’s hero’s life total to zero. You can do this through a number of ways and using a variety of strategies, but each will involve your hero attacking in one form or another.

The following sections describe how to prepare, set up, and play your first game of Flesh and Blood.

Deckbuilding rules vary depending on format. There are three formats in Flesh and Blood:

Classic Constructed decks contain 60 to 80 cards. That’s excluding your chosen hero, but including your hero’s weapons and equipment. You can include a maximum of three of each unique card in your deck.

Blitz decks are the same as Classic Constructed with two main changes. In Blitz, you can only play with young heroes, and your deck must contain exactly 40 cards (excluding your hero). You can get various Blitz decks on Amazon.

In Ultimate Pit Fight, your deck should contain exactly 60 cards plus your hero card, and you have a pool of a maximum of 20 weapon and equipment cards.

Flesh and Blood is still relatively new, so no cards have rotated out of the Classic Constructed formats. As new sets release, make sure you review the legality of cards you are using.

Before you begin building your deck, you should choose the hero you’ll use. Your hero informs the rest of the deckbuilding process. Keep in mind hero restrictions depending on the format you are playing. You’ll need young heroes for Blitz, and they’re also recommended for Ultimate Pit Fight. Adult heroes are the superior choice for Classic Constructed.

Your hero choice should depend on what type of deck you want to build. This is much easier if you’ve played some Flesh and Blood before and are familiar with different play styles and strategies. Some things to consider are:

Aside from your hero, weapons, and equipment are some of the most important things to consider when building your deck. Unlike the rest of the cards in your deck, they begin in play with your hero. This means that you can gain a lot of value from the consistency they provide. Make sure you consider how your weapons and equipment synergize with the strategy you’ve chosen to build around.

Classic Constructed decks allow for any number of equipment cards within your 80-card allowed maximum. Blitz allows for 11 inventory slots, or equipment slots, outside your 40-card deck. Ultimate Pit Fight has 20 inventory slots.

The rest of your deck is up to your choice! You should fill the majority of your deck, 60%-75% of your maximum, with cards that further your strategy and game plan. They should work together and add synergy – you don’t want lots of expensive, hard-hitting attacks in your sneaky Ninja deck. In such a Ninja deck, that means you’d want to include many cheap attacks with the Go Again keyword.

The remainder of your deck should be cards that interact with your opponent and work well to interrupt their game plan. You can customize these cards depending on the heroes you face most, and they might not synergize with your other cards. They should still be worth the slots based on the interaction they provide.

Each player begins the game with their chosen hero, weapon, and equipment in play, and their shuffled deck to one side. The hero resides in the center of the game board, whereas the weapon is immediately to the hero’s left. You place your other equipment to the left of the weapon. Each player begins the game with a number of cards in their hand, drawn from their deck, equal to their hero’s Intellect. You can identify Intellect by the blue symbol in the bottom-left of each hero’s card.

Each player can make one action per turn, unless that action has the keyphrase: “Go again.” This allows a player to take an additional action immediately. When you play a card or effect without Go again, or have no more actions to do, your turn ends.

Cards and effects each have resource costs. You must pay these costs to play cards and activate actions. Resource costs are noted within the red symbol on the top right-hand corner of the card, or somewhere in the text of a card with an ability.

You can only play some cards like attacks as part of combat. You play some, like Auras and Items, only on your turn, but they remain on the battlefield until they say they are removed.

In Flesh and Blood, there are four steps to combat, called “chain links.” Each step is described below.

Finally, if the initial attack played has go again, then repeat this process. This forms another chain link. When no further attack is declared, combat completes, any hero weapons return to their respective zones, and all other cards from the chain link are placed into the graveyard.

Some cards reference abilities that trigger when an attack hits. An attack “hits” if a hero is dealt any amount of damage through combat.

At the end of the first turn of the game, all players draw cards until their hand size is equal to their hero’s intellect. On subsequent turns, only players whose turn it is draw cards this way. Because you draw the same amount of cards each turn up to a maximum, it’s usually best to deplete the cards in your hand each turn to maximize the value from this draw step.

At the end of each turn, you can store a card to play later by placing it from your hand face down into the arsenal, located directly below your hero. Players can only store one card in the arsenal per turn, and no more than one card can be in the arsenal at any time.

Cards in the arsenal can only be played, meaning they cannot be declared as attackers or defenders, and cannot be pitched for resources. The only exception are reaction cards, some of which grant an additional bonus when you play them from the arsenal.

How to Play Flesh and Blood – Conclusion

Flesh and Blood is a unique TCG, with fast-paced, highly strategic gameplay. It’s complicated at first glance, but you can pick up basic gameplay after the first few rounds. While it may be easy to learn, it’s also very difficult to master, as the nuanced gameplay and small, frequent decisions require plenty of strategic thinking.

If you want to buy some FaB product but don’t know where to start, check our picks for the best Flesh and Blood booster boxes. Remember to support your local game store whenever you buy TCG products!