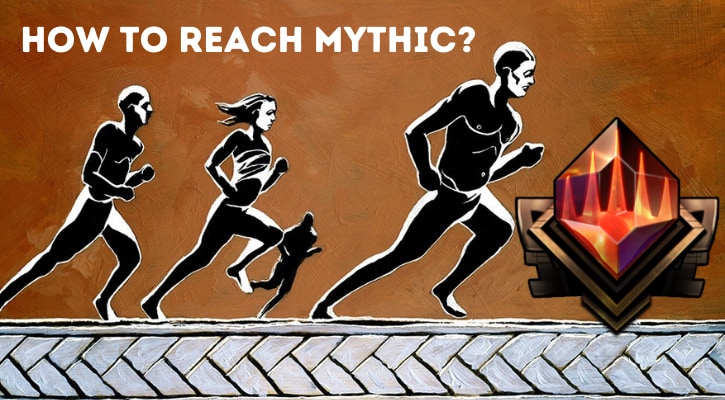 Do you want to reach Mythic on Arena? Maybe you want to qualify for the MTG Championship, one of the biggest MTG tournaments? If that’s the case, you’re in luck, because that’s all we’re talking about today.

We’ll provide detailed information about reaching Mythic, as well as some tips and tricks you can use on your way. However, most of the heavy lifting, you’ll still have to do yourself. Our tips can help you do that in the smartest way.

We already talked about how to get better at Magic and how to build better decks. So today we’ll focus mostly on aspects that are specific to climbing the ladder on Arena. You should still read the mentioned articles, if you’d like to improve your game play.

First, we’ll check some details about Mythic, if you already know about them, you can jump ahead to The Process section.

How to Qualify for MTG Championship?

Mythic Invitationals are one of the biggest current tournaments in Magic the Gathering. Each of them has a very high prize pool and features the best MTG players from all over the world.

To qualify for that tournament, you have to win seven matches, before you lose two in the Day 2 of the Mythic Qualifier. Mythic Qualifier is open to players who finish — not just Mythic rank, but the Top 1200 position in either Constructed or Draft Ranked at the end of the month.

You can check if your qualification status for Mythic Qualifier, by going to your Profile page in Arena. If you’re qualified, you should see the Qualified icon, like the one above.

What Does Mythic Percentage Mean?

When you reach Mythic you’ll see either a number or a percentage. If you have a number, that’s your placement in the Top 1500. As we said before, if you want to be able to play in the Mythic Invitational, you need to be in the Top 1200 at the end of the month.

If you see the percentage, it means you’re ranked lower than Top 1500. Let’s say your percentage is 90%. That means you need to pass 10% of mythic ranked players (outside the first 1,500) to reach the leaderboard.

When you win games, your percentage will go up and vice versa.

Is it Easier to Reach Mythic in Constructed or in Draft?

It’s easier to reach Mythic in Draft. Why? Because of the way the Tiers work. Here’s how many steps (little half-circles you see under you rank), you need to advance a Tier.

As you can see, going from Gold 4 to Gold 3 takes six steps in Constructed, but only five steps in Draft. That means one additional step per tier, if you’re playing best-of-one.

Over the course from going from Gold 4 to Mythic, this makes up for an additional 12 steps. That’s not just 12 more games. If your win rate is around 60%, that would mean over 50 additional games on average.

So in general, reaching Mythic takes over 50 more games in Constructed as compared to Draft. However, since the change in the Gold rank (your wins now give you double progression) the number of wins difference is somewhat reduced.

Reaching Mythic on Arena — The Process

Reaching the Mythic rank on Arena takes time. Of course, the better your win rate is, the less time you need. However, even if you’re a pretty good player, reaching Mythic can still take quite a while.

So you should probably have at least 45* hours per month dedicated to playing Ranked, if you want to reach Mythic. It might take less than that, but it’s more likely that it takes far more.

*Frank Karsten did the math and found out that an above average player needs to play for around 45-50 hours to reach Mythic.

This one is probably easier said than done for some players. When you’re trying to reach Mythic on Arena, you’ll have to play a ton of games. That’s why you’ll — sooner or later — get into a streak of losses, seemingly out of your control.

You might start to tilt (get frustrated), and start playing worse because of it. So what should you do to combat that kind of behavior?

One simple strategy is to take a break after every loss or every consecutive loss. Go grab yourself a glass of water, or maybe go outside for a couple of minutes. Don’t start playing if you’re still angry about your last loss.

Remember, climbing to Mythic is a marathon, not a sprint. It’s okay to just stop playing for a day or two, if you don’t feel like it.

You can try and work on your perception on losing. Try to accept that you’ll lose a certain amount of games on your way to Mythic. Even the best players in the world have a win rate around 70% at most. The loss doesn’t necessarily mean that you’re a bad player. It can just mean that you’re playing a game with variance, so keep that in mind.

Be Honest With Yourself

Admitting your mistakes is an important step on your way of becoming a better player, and subsequently reaching Mythic.

Turn Off the Autopilot

When you’re able to play countless of games, you kinda go on the autopilot mode. You just start making the same play that you always make in similar situations. However, even when the situation is similar, it isn’t necessarily the same and you can get caught into repeating some bad play patterns.

Take a couple of seconds before you make each play and think why you’re making the play you’re making. Only with critical thinking, you’ll start making better plays, which will improve your win rate, helping you reach Mythic faster.

In this section we’ll talk about how to reach Mythic on Arena in any of the three constructed formats (Standard, Historic and Alchemy).

The easiest way to reach Mythic in Constructed is to simply play the best possible deck. Don’t make excuses like:

If everybody plays a deck, then it must be pretty strong. Your brew might get there one day, but you’ll waste a lot of time grinding the ladder with lower win rate, which will “reward” you with a lower position, once you reach Mythic.

Of course, if you’re playing just to have fun with your brew, then by all means — go for it. However, if you want to get to Mythic in the most efficient way, you should just play the best deck.

Exceptions to the Rule

As with every rule, there are exceptions to this one as well. So when should you not play the best deck?

First thing to consider is the deck’s speed. If the best deck is very slow, you might want to play something faster, with slightly lower win rate. If you’re able to play three games with a Tier 2 deck in the same time you’d need for a single game with a Tier 1 deck — you should probably just play the faster one.

Secondly, you should pay attention to the meta game. If you’re facing a ton of red aggro decks, you should pick a deck that isn’t necessarily the best in a vacuum, but has a very good match-up against mono red.

To reach mythic, you need a win rate over 50%. Of course, it’s possible to become Mythic with a lower win rate, but it’s both unlikely and takes more time. So we’ll presume that your win rate is over 50%, or that you’ll get it up there.

Once that’s the case, you’ll reach Mythic faster by playing best-of-three. That’s assuming you know how to sideboard, so your overall win rate won’t fall once you join Traditional queues.

You can see how your win rate would change once you go from best-of-one to best-of-three. (Assuming your game win rate doesn’t change.)

As we talked about, reaching Mythic in Limited is technically easier and faster than playing Constructed. However, you need to pay to enter a Draft.

That’s why — unless you’re very, very good, you’ll be losing Gems or Gold while drafting. That means that you might need to buy some Gems if you want to reach Mythic in Limited.

If you aren’t that good at drafting, you can find more information about it in our latest Crimson Vow Draft Guide.

One possible tool you can use is resigning your deck, if your draft was a train wreck. You’ll just get the prize for 0 wins, and you’ll have to pay the entry again, but you won’t have to play any games with a poor deck.

We tend not to do that, as it’s not only expensive, but also unsportsmanlike. However, we wanted to let you know that you have this option to use in case of emergencies.

Should You Try To Reach Mythic on Arena?

It depends on what your goals are. If you want to improve as a player, then it’s definitely worth it to try to reach Mythic. Not only will you find out how good your skills are, you’ll also play against better opponents, which will in turn improve your game.

Maybe you like competition and want to try to play Magic on the biggest stage against the best players in the world? As we mentioned, reaching one of the Top 1200 spots in Mythic gives you a chance to play in the Mythic Qualifier, which can take you to the Mythic Invitational.

It’s not easy, but it doesn’t ask much of you. Just play Magic from home. You don’t need to travel anywhere, like you had to do if you wanted to play on the Pro Tour in the past.

On the other hand, if you just like to play Magic for fun and like playing wacky brews, grinding to Mythic might not be for you. Sure, you can play on ranked, and maybe you’ll even get there, but don’t be too hard on yourself, if you don’t reach it.

That’s all about achieving Mythic rank on Arena. Do you have any more questions about it? Just ask in the comments below, we’ll be happy to help. Of course, if you’re a more experienced player, you can also share your advice.

If you don’t want to miss another strategy article, give us a follow-on Instagram or Facebook. Besides article alerts, we also post new spoilers, Magic memes and new Arena codes. Speaking of codes, you can find all currently available MTGA codes here.

Until next time, have fun and may you reach Mythic without tilting.

8 thoughts on “How to Reach Mythic on Arena”