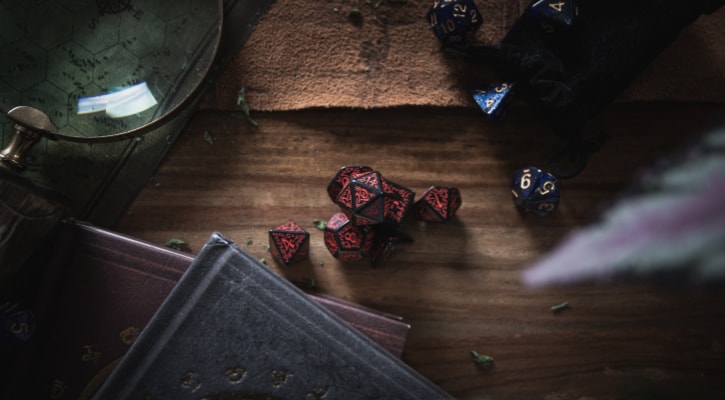 It is scary to start running your own DND campaign. Maybe you’ve likely already ran a premade adventure, and now you want to make your own story. (Like the cool Dungeon Masters from your favorite podcast.) Or maybe you played in a campaign

Whichever the case, I’ll tell you everything you need to know about how to write a DND campaign. We’ll take a look at:

So where do you start when creating your own campaign?

I’ve found that thinking of what technology is available helps me set up what the world is like. The cities and travel will differ if I’m running an authentic medieval campaign versus running a steampunk world with airships and mechanical villains.

Technology will make travel easier, which is both good and bad. On the one hand it means they’ll get to the quest goal far quicker. On the other hand, you may want to make it more difficult to reach their destination if you want them to run into side quests and fights on the way.

Personally I enjoy steampunk tech, so having motor coaches and airships aren’t an issue if you include mountain and forest terrain that require them to go on foot for some distance before reaching their goal. That way you can still throw some monster encounters in and still cut down on time. Just make sure to prepare for them to nuke an enemy base from orbit with any flying craft.

Magic and technology generally go hand in hand in fantasy games. For magic, how common do you want it to be? Should magic be common enough that it powers industries and technology? Or do you want to make magic outlawed or extremely rare, to add story elements for all the mages in your party. How common is magic items?

Always remember you can make the world any way you want. Have movie theaters powered by magic. By all means, have a dragon with a reality show. Have firearms be rare because business owners spent their money researching magical bows instead of improving useless muskets.

To Travel, or To Stay Home?

One important thing to think about when writing a DND campaign is the setting. Do you want your party to constantly be traveling or to have a home base in a specific city?

Travel means you can play with introducing new settings and characters more frequently, but that also means nothing is permanent. One campaign I was a player in got on my nerves because I got a side quest, but the main quest kept forcing us to travel. Thus I never had the chance to do my side quest. We were constantly in a hurry.

If you have a home base you can develop the characters and setting more. However, you could potentially feel trapped if you get bored of the city. There is nothing wrong with having multiple home bases for them to stop at between quests. This is a good idea if you want a mix of travel and permanent characters/environments.

There is a table in one of the Dungeons and Dragons 5 Edition books that helped me with story pacing and travel. It goes into what level threats the party should face depending on their level.

Going off of this table, I usually start lower level campaigns with only dealing with 1-2 cities. Then I slowly start introducing the general area and important characters.

As the party levels, they begins to travel to new locations. They can also just focus on that specific location, depending on what the party wants. You can run a full campaign out of one city, and I personally like this – if the party is working for organizations that sends them out on jobs.

Political systems for your kingdoms can be very daunting. Most people just use generic media versions of European monarchies. However, if you include a variety of systems it will make your world more authentic to your players. This can really help you make an amazing DND campaign.

Here’s just some examples, of political systems you could use:

You can also check the Wikipedia page with a list of forms of government, if you’re running out of ideas.

Even if you have no intention of political intrigue, it is still a good idea to plan for this, as your players might want to get involved with nobility or have a royal family member in their backstory.

Something I see with Dungeon Masters is that they get too excited for the main story. Therefore they constantly rush the players. This usually leads to the players burning out. Remember to give them breaks in the story between missions where they can rest, buy or sell loot, and train new abilities or get new quests. I like having my players visit a town during a festival.

Each character has their own personal goals, and they need time to work on those goals in between saving the world. If you’re constantly going “the villain got their goal, go prevent them from doing the other thing!” then there is no chance for the wizard to learn new spells or the cleric to interact with their church.

To help with this I recommend writing your main story in story arcs instead of a large story. This also helps when a player does something you didn’t expect and you have to change the story. Maybe they killed someone that is important to the story, or they decided to go to a different city. You can then focus on wrapping that story arc up and begin rewriting the next arc. Plan backup quests, trust me.

Your DND Campaign Doesn’t Have to Save the World

Too many DMs want an epic plot against an evil godlike entity. From my experience these stories tend to end up boring. I once had a non-player character tell my character to kill an evil dude, and I became very confused:

“Not the local emperor, the EVIL emperor in this faraway place!”

As you can imagine, I could care less about killing someone that a stranger told me is evil without any details.

In another campaign the Dungeon Master had a character that we were all friends with, and we were helping find his brothers. We were understandably motivated to kill the villain when we discovered one brother was murdered.

It’s better to show the villain is evil by having them do something mean. Sounds simple but can be hard. Have a corrupt politician that’s trying to close a local business the players like. Have some bandits begin to threaten the innkeeper that just fed the party.

Going along with my story arc plan, it is usually better to have a different villain in each arc. But it’s great if you can connect all of them to the players’ backstories or to a main villain left for the final arc.

This gives you the chance to develop multiple villains. From the perspective of a writer, this is great because it gives you a chance to cut the current arc short and move to a new arc with a 500% cooler villain. You may think “but my villain is the coolest!” but someday you’ll end up accidentally naming a villain a Korean profanity or something. All it takes is one stupid nickname to make it impossible to take a villain seriously.

If you try to focus on the main villain too early, your players are just going to speedrun to the final boss fight from the very beginning. Now many Dungeon Masters will counter by making the players’ plans fall apart. However, from the players’ perspective they feel betrayed and just give up making plans.

I’ve been talking a lot about villains, so let’s go into what makes a good villain.

Everyone wants a bigger than life dark lord, but that doesn’t usually work. Just saying someone is evil never works, you have to actually show they’re making life worse for those around the players. Now this leads to a paradox that is very hard for people:

I find it is always a best practice to ask players when you start a game about any triggers they could have. This is not only just the best thing to do to be a decent human being, but also will help you craft your villains.

Make a villain that hurts people, but if someone has a bad history with torture than avoid torture. Avoid burning businesses if someone had a home burn down. Also maybe avoid a plague themed campaign during a quarantine.

Explain the Rules When You Start

Before you actually start with your DND campaign, you should always have a session 0. This way you can tell everyone what to expect. When I say rules in the title I’m not referring to the Player’s Handbook, I mean your personal rules. If you want more combat, tell everyone so they can prepare combat characters. If you want mystery, they can prepare detectives instead of barbarians. It’s horrible to play a character that is useless in the campaign.

Some people like to add realism with survival rules such as “purify water and stay warm.” I once had a campaign fall apart because the Dungeon Master set it up in a rainforest. DM told us with the heat we can’t use heavy armor. Big surprise to our party that had 3/5 of our characters built for heavy armor.

They couldn’t sell the armor, who wants useless armor in a jungle? So no armor for our melee characters. If we knew this info ahead of time and properly built our characters, we would have had a chance to have fun.

Player and Character as Separate Entities

People often forget that player and characters are separate entities. So even if the player doesn’t know a specific information, their character could. It’s totally fine to go “you know this group is evil because of things they did to your friends.”

If they’re lost or accidentally insult the local religion, you should warn them of things their character would know so that they can properly prepare their actions. If you create a world, the player can’t know everything about it unless you tell them.

Remember to Have Fun on Your DND Campaign!

Always remember that everyone wants to have fun. Don’t force your players to do anything they don’t want, and don’t get mad if they don’t follow your plan. Sometimes characters think of a plan you didn’t plan for, or switch religions or don’t care about immortality and unlimited power. It’s your job to react and continue their story.

Comment below if you have questions or want to tell stories about your campaigns. I’d love to hear any advice that I missed in this article.

If you want more DND articles, maybe some of the following ones will interest you:

Until next time, have fun and enjoy your awesome DND campaign!