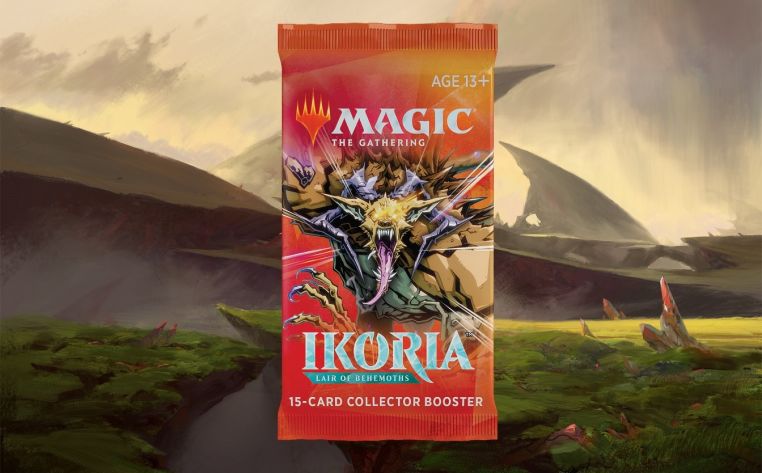 What’s inside Ikoria Collector Booster? A ton of goodies as it turns out. Today we’ll talk about what exactly is in these boosters including Godzilla cards, showcase cards and extended art cards.

There’s quite a lot to unpack here. Don’t worry, we’ll take a look at each group of cards separately and see what you can expect from each slot.

Where to Buy Ikoria Collector Booster?

You can buy Ikoria Collector Boosters on Amazon. If you want to buy more, you might consider a whole box of Collector Boosters. This will give you 12 boosters total, and will probably cost less then buying them separately.

There are 35 different Showcase cards. Showcase cards are card with a special alternate artwork. This time, all mutate creatures received the Showcase treatment, as well as Triomes (three color cycling lands).

All of them are listed bellow – and they truly look stunning. Which one is your favorite? Tell us in the comments bellow.

All three Ikoria planeswalker got an alternate art, which you can get in Ikoria Collector Booster. They look pretty cool and what’s even better – they all have home in Standard decks. Let’s take a look at them.

Lukka is played in decks with no other creature cards but Agent of Treachery, You can sacrifice the tokens you get from non-creature cards like The Birth of Meletis and – boom! – here comes the Agent stealing your opponent’s stuff.

As can be expected from Vivien, she has seen some play in different green creatures deck. A great card advantage card!

Narset of the Ancient Way

Narset is mostly played in different decks build around Fires of Invention. She provides both ramp, card selection and removal, if you build your deck correctly.

Magic partnered with Toho Company to bring cards like Godzilla, Doom Inevitable to us! This are alternate art cards for some creatures from Ikoria.

Extended art cards are just what the name suggests – cards with the regular art, that goes all the way to the left and right border of a card. You can see an example of the look on Eeerie Ultimatum bellow.

There are 46 cards (rares and mythic rares) with extended art. They are all listed bellow, grouped by color.

You can take a look at how they look here, although they’re all like regular versions, just without borders.

Commander 2020 has come early this year. It was released alongside Ikoria set. However, the five Commander decks aren’t the only place to get these cards.

One card in the Collector booster will be from this year Commander set. Card will be in non-foil and could be any card that appears in the set (except probably a basic land). If you’re lucky you could get an Arcane Signet or even Gavi, Nest Tender.

You can find more about Commander 2020 here.

Is Ikoria Collector Booster Worth It?

Okay, so now we know what’s in the Ikoria Collector Booster. The question is – is it worth buying them?

Well, it depends on what you want and like. If you just want to play draft, then it’s not the product for you. You just want a regular booster box of Ikoria, as the boosters are made especially for drafting.

Same goes if you don’t like shinny cards with alternate art, but just want cards for your Standard deck. You can also just buy singles.

However if you do like to expand your collection with premium and rare cards, then Ikoria Collector Booster is a great buy. Even with just one booster you’ll get 15 cards, either foil or with alternate art plus a foil token on top of it.

These boosters usually also contain some great legendary creatures and are therefore great for Commander players. And that’s without mentioning some great Commander cards like Ruinous Ultimatum and Triome lands.

So if you want to get one, you can order it on Amazon. As we mentioned before, if you’ll be buying lots of them, it’s a good idea to get a Collector Booster Box, which comes with 12 Collector boosters.

Make sure to not miss another MTG news or spoilers and give us a follow on Instagram or Facebook. There you’ll find spoilers, new articles, daily deals on MTG Arena and – of course, Magic memes.

Anyways, have a great day and may you open just the card you’re looking for in your Ikoria Collector Booster.