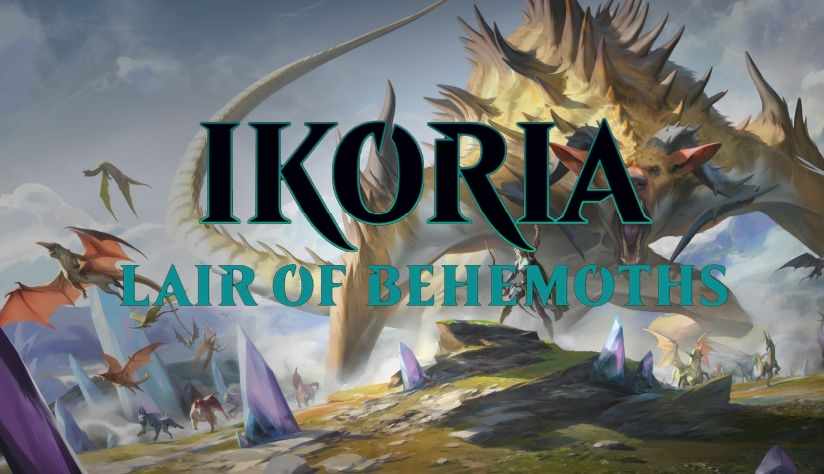 You’ve come to the right place for all news about Ikoria: Lair of Behemoths. Ikoria spoilers and previews begin on April 2nd, 2020. But we already have some information about the set thanks to the teaser from Mark Rosewater, the head designer for Magic the Gathering.

Ikoria is a brand new plane with enormous monsters, and we know that Vivien Reed will be there. Want to know more? Let’s get right to it.

Recent trailers for Magic sets have all been top notch. This one also won’t have bad reputation.

As with every big set, Ikoria also brings us the MTG products we’re used to. They are listed bellow. If you want to check their price on Amazon, just click on them.

You read that right. This year, Commander decks are coming early! You can read all about Commander 2020 here.

The mechanic has actually appeared on a test card Recycla-Bird from Mystery Booster.

There are 10 legendary creatures with Companion ability. The companion ability is a deck building rule. If your starting deck follows that rule, the chosen creature is your Companion.

Mutate is a new keyword – it let’s you combine creatures into bigger, better, stronger monsters.

This ability has also appeared before. On a silver-bordered card Surgeon General Commander.

Cycling is a returning mechanic. You can pay a cycling cost on a card and discard it to draw a card. That usually helps you to have a use for more expensive cards in the early game.

The other use, as you can see with Drannith Stinger, is to cycle away your cheap cards in the late game. 2/2 won’t do much in the late game, but it could draw you another card that might make a difference.

As mention Mark Rosewater had a teaser for Ikoria, where he spoiled some exciting tidbits about the newest set. Let’s see what we got.

Even though no actual cards got previewed, we got some parts of card text. So Ikoria has cards with the following text:

We’re also getting two cards that care about odd/even numbers. They both have the remider text: Zero is even. Currently there are only two such cards in history of Magic – Void Winnower and Ashling’s Prerogative.

Squirrels are Returning in Ikoria!

Besides, Mark also announced some special creature types coming in Ikoria. Perhaps the most exciting part – Magic is finally getting Squirrels in black-border again!

Here are all the teased creature types:

Can’t wait for that Dinosaur Turtle!

That’s not all – Mark made more interesting remarks. Ikoria brings us Magic’s seventh Egg and an aura that gives a biggest power/toughness boost ever.

There are also a ton of different counters in Ikoria Liar of Behemoths – thirteen of them if you count Planeswalker loyalty counters.

Some players will also see their wish come true. A cycle that players have been asking for over ten years is finally getting made. What could this be? We’d be very excited if they finish the Horizon Canopy cycle. We currently have 6 lands in this cycle. All enemy colored ones, but only Horizon Canopy in allied colors.

If you’re wondering when is the Ikoria prerelease or when does Ikoria come to MTG Arena, we’ve got you covered.

IMPORTANT UPDATE: Due to COVID-19 outbreak Wizards have suspended all in-store play in North America, Latin America and Europe until at least May, 10th. That includes the prerelease. You can read the whole announcement here.

Prerelease is moved to May, 15th in North and Latin America, Europe, Australia and New Zealand. This announcement is available here.

Stores are allowed to sell Prerelease Kits and Commander decks for players to take home without playing. If your location has problems with the virus, consider not attending events, such as prerelease. Stay safe and respect your local laws about COVID precautions.

Remember that you can also order Prerelease Kits on Amazon.

Want to see Ikoria spoilers when they are released? If so, we have some suggestions for you. First, you can bookmark this page, we’ll update it frequently when new spoilers become available. Second, give us a follow on our Instagram or Facebook page. All the best spoilers will be posted over there.

Anyways, that’s all about Ikoria spoilers so far. Stay tuned and may your favorite archetype get a lot of support with Ikoria.

4 thoughts on “Ikoria: Lair of Behemoths Spoilers, Teasers and More”