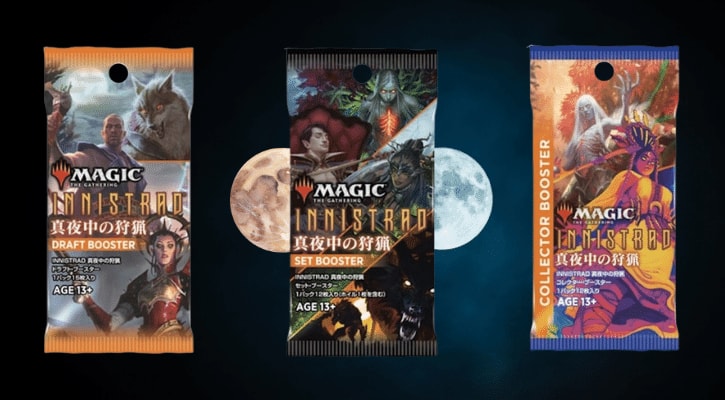 Are you looking for Innistrad: The Midnight Hunt spoilers? If so, you’ve come to the right place, as today we’ll talk about everything we know about the new Innistrad set, that’s coming out in autumn 2021.

Although that’s still far away, we just got some interesting information, thanks to the Innistrad packaging leak. Let’s take a look.

The Innistrad Japanese packaging was leaked on the MTG subreddit on February, 13th. While these aren’t confirmed to be real, they do look pretty convincing. Each type of booster has three different versions.

Teferi has many different cards, the two most powerful ones are most certainly Teferi, Hero of Dominaria and Teferi, Time Reveler. His latest card was Teferi, Master of Time in the Core Set 2021, which wasn’t on the same power level. We shall see how strong he will be when in the Innistrad set.

Wrenn and Six have only one card, but that’s a very powerful one. While Wizards almost surely won’t reprint the same card, it’ll be interesting to see what kind of card they’ll get. The wolf on the artwork might possibly be Arlinn Kord.

Set boosters show us some unknown characters plus some Werewolves, which are apparently making a return. This doesn’t come as a big surprise, as they are a very popular tribe of the plane.

Wrenn and Six also appears on one of the Innistrad Collector Boosters. There’s also another character, which we don’t know yet. Do you have any idea who might it be? Let us know in the comments below.

That’s all we know about the 2021 Innistrad set so far. Once more Innistrad: The Midnight Hunt spoilers and information emerge, we’ll update this article, so make sure to come back. If you don’t want to miss it, give us a follow on Facebook or Instagram.

There we post various MTG news, articles, memes and more – including new codes for MTG Arena. Speaking of which, you can find all currently available MTGA codes here.

Until next time, have fun and may all your wishes for the new Innistrad set come true.