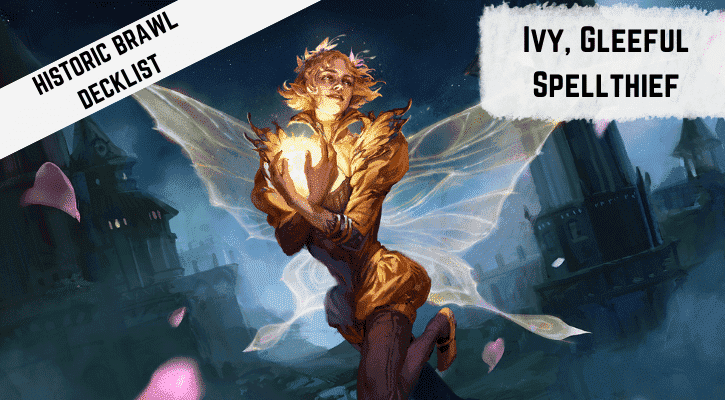 When I first started building around Ivy, I wasn’t sure if I’ll be able to make it work. Arena doesn’t have all the cards that Commander has, which could be problematic. However, once I dove deep, I found many synergies available. When I played with the deck, I found out that it’s actually good. So, I proudly present this Ivy, Gleeful Spellthief Historic Brawl decklist:

One great thing about Ivy is that it only costs two mana, so you can easily protect it. You could also set up a scenario, where you play Ivy, and get value from its ability on the same turn.

Speaking of the ability, it’s really a special one. I’ve built the whole deck around it. It was a bit tricky to do so, until I realized that I want to use two themes to do so.

The first theme was mutate. Mutate is a mechanic from Ikoria, and it comes with a lot of rules baggage. I won’t go into details here, but if you’re unfamiliar with the mechanic, you can find mutate rules here.

Since mutate targets a single creature, you’ll want to mutate on something besides Ivy, then copy the spell on Ivy. You’ll get two mutate triggers, and you’ll usually improve two creatures. A lot of mutate creatures get better if you mutate on them multiple times, like Auspicious Starrix. That’s why I decided to include a big package of creatures with mutate.

The second theme is dealing combat damage in order to draw cards with various auras like Sixth Sense and Combat Research.

These auras combine nicely with Ivy. You put them on another creatures, and you get a copy for Ivy. Pretty good, right? Thanks to these auras, the deck also features a small enchantment subtheme.

What ties both themes together are cheap non-Human creatures. This way you’ll be able to have a curve of, turn 1 creature, turn 2 Ivy, turn 3 use an aura or a mutate creature. Of course, you should do this only when you suspect that opponent won’t be able to kill Ivy before you untap with it.

Why is it important that creatures aren’t Humans? Because you can only mutate on non-Humans. I still included some Humans in the decklist, but only the ones I really like in this shell.

Here are some parting tips for playing Ivy, Gleeful Spellthief in Historic Brawl.

That’s it for today. If you want to upgrade this deck, you can certainly do so, as I believe there’s still room for improvement in almost all areas. I’ll certainly continue to keep on upgrading it – how could I not when it’s so fun to play. See ya!