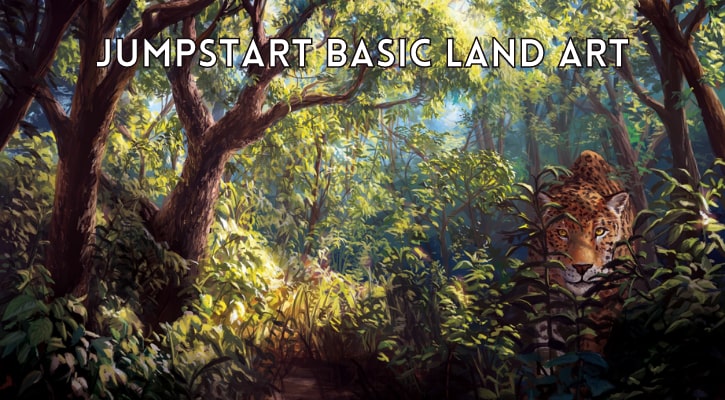 In this article you’ll find all Jumpstart Basic Land Art. There are 40 different basic land artworks in the set, 8 for each land type. Besides, there are also five additional planeswalker basic lands.

We also talk how you can get all those basic lands in paper or Arena below. But first, let’s take a look at them.

Magic community was the happiest with the Dogs Plains, which features one very happy good boy.

Islands also have a bunch of amazing art. Milling Island has a nice reference to an all-time classic Millstone.

Phyrexian Swamp is possibly the most sought after basic land in Jumpstart. Titus Lunter made an amazing art, featuring Phyrexian Obliterator. But that’s not all, its name is written in Phyrexian – both in paper and on MTG Arena. Pretty cool, huh?

Here are some truly amazing Mountains. Goblins players will probably have to get the Goblins one.

Forests from Jumpstart feature our favorite artwork – you might have figured it out from the banner image – it’s the Cats Forest. Nevertheless, Predatory Forest is a close second. That poor deer, though!

Besides all of those lands, which are exclusive to Jumpstart boosters, there are five more planeswalker land arts. However, this can also be acquired in different products:

They feature a frame design specific to a respective Planeswalker:

So where to find all those basic lands? You can buy Jumpstart on Amazon. Each booster contains one land of the corresponding theme.

On Arena you can get them in the Jumpstart event. You can find more information about Jumpstart Boosters here. Additionally, if you’re a Commander fan, you might want to explore the best Jumpstart Commander cards.

Anyway, that’s all about Jumpstart basic lands. Until next time, have fun and may you open your favorite basic land.