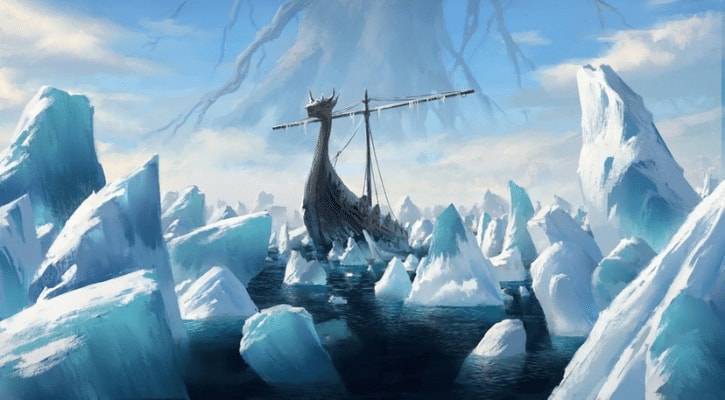 Kaldheim is bringing back snow mechanic and with it Kaldheim basic snow lands, or snow-covered basics, as they’re sometimes called. In this article you’ll find all ten of them, and all information you need about where to get them.

There are ten different Kaldheim basic snow lands, two per each type. All of them are all listed here:

Which one is your favorite? Let us know in the comments below.

As you might have noticed, Snow cards got a new frame – basic snow lands included.

“When we decided to create a set that features snow, especially a Viking-inspired world, it made sense to give snow focus. In Magic’s history, we’ve done snow a few times before. We decided the gameplay was going to be better if you could quickly scan to count your snow permanents in the same way we distinguish artifacts and enchantment creatures. I focused on creating a concept that maintained color identity while also being flavorfully snow.”

All in all, the new snow basic lands certainly look pretty special.

Where to Get Kaldheim Basic Snow Lands?

Kaldheim will have both regular basic lands and snow-covered basics. So that means that while you might be able to Kaldheim basic snow lands in regular (Draft) booster packs, they aren’t guaranteed.

We don’t know the odds for getting a snow-covered land in a Draft booster pack yet, but once we do, we’ll update this article with more info. If you want, you can already order Kaldheim Draft Booster Box on Amazon.

However, there is a way to get guaranteed foil snow-covered lands in a Kaldheim Collector Booster.

Besides the foil snow-covered lands, you also get a bunch of foil and alternate cards in the Collector Boosters as well. You can find more info about Kaldheim Collector Booster contents here.

That’s all about Kaldheim snow-covered basic lands. How do they look to you? Better or worse than older versions? Leave a comment and let us know.

If you want more information about this Viking set, you can find Kaldheim spoilers here. The article also contains plenty of useful information, such as important Kaldheim dates, product overview and more.

Until next time, have fun and may you always draw just enough of your snow-covered basics.

2 thoughts on “Kaldheim Basic Snow Lands – List of All 10”