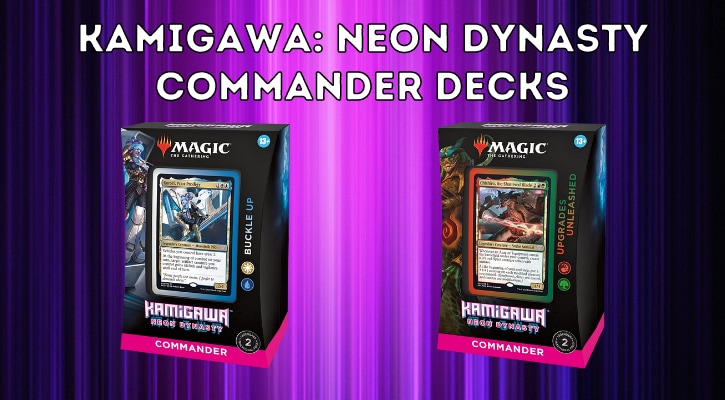 We’re finally going back to Kamigawa. Can you believe it? It’s been 17 years since the last time we’ve been there. A lot of things change in almost two decades. Back then, there was no Commander format, but nowadays, that’s the most popular MTG format, so you’ll probably be happy, because we’re also getting two Kamigawa: Neon Dynasty Commander decks.

In this article, we’ll talk about everything we know so far about them, including:

As we mentioned before, there are two Neon Dynasty Commander decks. The first deck is Buckle Up and the second one is Upgrades Unleashed. You can already order both decks on Amazon.

You probably know that Wizards released intro (or lite) Commander decks in the past. These decks had lower power level and lower price. For an example, you can take a look at Kaldheim Commander decks.

So, the big question is: Are Kamigawa: Neon Dynasty Commander decks intro decks or the full versions?

As can be seen from their price, the Neon Dynasty Commander decks are fully powered. Furthermore, we didn’t have an intro Commander deck since Kaldheim, back in February 2021. It certainly looks like Wizards are phasing out this product.

So, this means that these are powerful decks with 15 exclusive new cards in each one and with exciting reprints. The new cards will be thematically tied to Kamigawa, but the reprints can be from anywhere.

You don’t just get the foil version of your main commander. There’s also a so-called display version. It’s a slightly thicker card, and isn’t meant for competitive play. You can use it in your command zone, so you don’t accidentally shuffle it into your deck.

We’re starting with a fascinating Commander deck. Buckle Up is all about the Vehicle subtype. Previously, the support for Vehicles was in White and Red. However, this time around, the mechanic will move into White and Blue (at least in this Commander deck). Blue could definitely add some nice effects for the Vehicle tribal theme.

*These are the brand-new cards. You can see all of them in the next section. Some of these also appear in the regular set, and you can find them in Kamigawa spoilers. The rest of the cards are reprints.

Kotori is certainly an interesting commander, with a clear direction. You’ll want to include a lot of strong Vehicles in your deck, in order to unlock its full potential.

The fact that it only costs three mana is great. When you have Kotori in play, your Vehicles have crew 2. Since Kotori has two power, it means you can immediately crew any Vehicle you have in play. For example, you can attack with Consulate Dreadnought on turn three. Oh, and it’ll have lifelink and vigilance as well.

Some other Vehicles that you might want to pair with Kotori are:

All in all, while Kotori is probably not the strongest commander out there, it’s certainly a fun one. Sure, you are shoehorned into a vehicle tribal deck, but that subtybe hasn’t been explored much in Commander.

Before Kotori, the only two commanders that referenced vehicles were Sram, Senior Edificer and Depala, Pilot Exemplar.

However, both of them cared about other things too. Sram is more known for synergies with Auras and Equipment, while Depala supports Dwarf tribal. So it’ll certainly fun to play with a commander that only cares about vehicles.

Upgrades Unleashed is centered around the new modify mechanic. The mechanic gives you a bonus if you control a modified creature. A creature is modified, if it’s equipped, enchanted or has a counter.

This type of mechanic would play well in a Voltron shell. (Voltron is a strategy, which uses Auras and Equipment to power up a single creature, usually Commander — thanks to the Commander Damage rule.)

The problem with Voltron can often be that you’re putting all your eggs in one basket. However, let’s take a closer Chishiro, deals with that issue successfully.

*These are the brand-new cards. You can see all of them in the next section. Some of these also appear in the regular set, and you can find them in Kamigawa spoilers. The rest of the cards are reprints.

**Yes, there are two Mossfire Valley cards in the deck. This is a printing error. Players should remove one of them and replace it with either Forest or Mountain for the deck to be legal.

Whenever an Aura or Equipment comes into play under your control, you’ll also get a 2/2 Spirit with menace — if you have Chishiro in play. This way you’ll avoid the Voltron problem of having one excellent creature, as you’ll also go wide with Spirit tokens.

Chishiro’s second ability also somewhat supports the go-wide strategy. You can equip or enchant or put counters on your Spirit tokens, and they’ll get +1/+1 counters. So it looks like this deck will be able to fight in two very different directions, which is always useful.

Another benefit is that modify mechanic actually gives you a lot of freedom to build your deck. There are just so many Auras, Enchantments, and counters to choose from.

Therefore, the Chishiro’s power level will often depend on the way you’ll decide to build it. Whichever way you decide to go, you’ll certainly have a lot of fun with it.

That’s all about the Kamigawa: Neon Dynasty Commander precons. Once we get more information, we’ll update the article, so make sure to come back in a while. You can also share your own predictions in the comments below.

Want to explore the cards from the regular set? Check out the Kamigawa: Neon Dynasty spoilers!