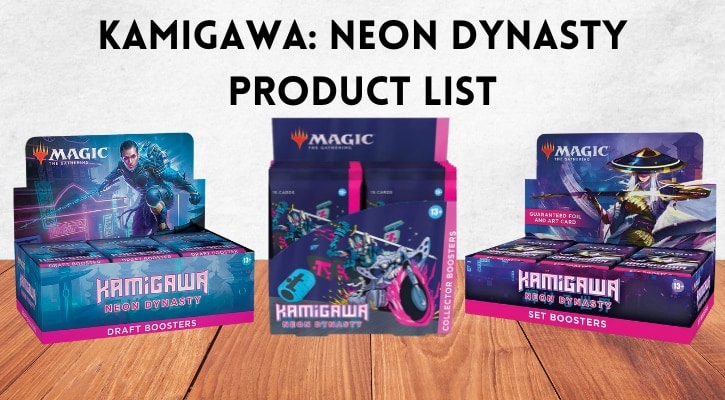 So many new products are being released with each MTG set, that it’s hard to keep track of all of them. Especially, if you aren’t the most enfranchised player. That’s why we made this Kamigawa: Neon Dynasty product list, where you’ll find every type of MTG product you can get from the new Kamigawa set.

If you want to draft Kamigawa: Neon Dynasty with your play group, you’ll certainly want a Draft Booster box. Each booster box contains 36 boosters, which is more than enough for a fun draft event or two – depending on the size of your group. Just remember that you need three boosters per player.

Set boosters are great for players who simply like to open boosters, and they don’t want to draft with them. The booster box comes with 30 boosters, and each contains 12 cards. The card are usually more exciting than the ones from Draft boosters, as you can get 1-4 rares, Art cards, plus cards from The List.

If you want more in-depth information, you can find everything about Set boosters here.

Collector Boosters are certainly the most exciting MTG boosters, and that’s true for Kamigawa as well. This booster box contains 12 boosters, and each one of them has 15 cards. All of them will either be in foil, or they will have the alternate art.

This is the most expensive type of a booster, as it has the highest chance for valuable cards.

Theme boosters contain 35 cards, that’s a lot more than usual boosters. You can also choose the color of your cards. However, due to the higher price, and the fact that you only get 1-2 rare cards, they are generally considered quite mediocre.

The target audience for these boosters are the new players, who just want to get as many cards in a single color as possible, and don’t care much about their rarity.

If you’d like to open some boosters, but the price of a booster box is too high, you can get yourself a bundle. It comes with fewer Set boosters than a booster box, but it does have some cool bonuses.

On top of that, everything is packed in a nice-looking sturdy box, which can be used for card storage.

Commander decks are now released with every big set. Of course, you’ll find two of these on this Neon Dynasty product list as well. So far not much is known about the decks, but their names. However, we can expect more information soon.

The first deck is Buckle Up, which suggests a deck built around Vehicles of all things! This is further supported by some of the artwork we already have from the set – like the motorcycle that you saw on the Collector booster box above.

This will certainly be an interesting deck to say the least.

The second deck is called Upgrades Unleashed. That’s really not much to go speculate about. However, you can find some predictions and more information about the Kamigawa Commander decks here.

That marks the end of the Kamigawa: Neon Dynasty product list. Now you should know which Neon Dynasty MTG product is the best to buy for you. If you have any more questions about these items, you can ask it in the comments below, and we’ll get back to you as fast as we can.

If you’d like to explore the cards of the set, you can find Kamigawa: Neon Dynasty spoilers here.

Until next time, have fun and may you open some good cards in your Neon Dynasty packs.