Skip to content
Home → Info Base → March of the Machine Spoilers 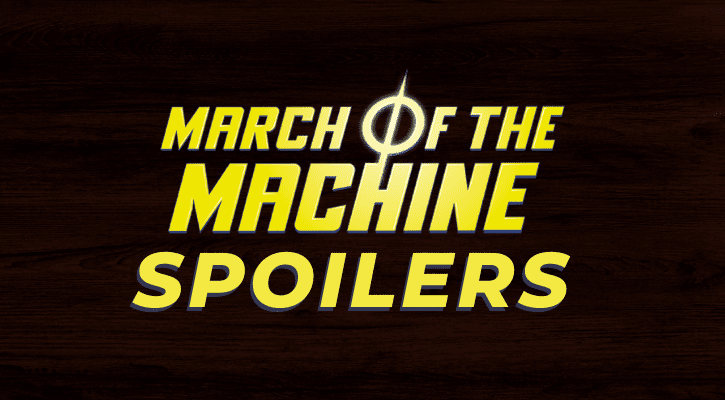 March of the Machine is probably the most ambitious MTG set ever. It will bring big changes to the world of Magic, both in terms of lore and game play. We have a lot to talk about today, as we take a look at March of the Machine spoilers, possible leaks, and various news and speculation about this extraordinary set.

March of the Machine Spoilers

Currently, there are no official March of the Machine spoilers. However, based on the packaging, we can assume that the following characters are getting new cards:

There are also more interesting tidbits about this set, so let’s find out…

What to Expect in March of the Machine?

We’re starting with some interesting things that you can expect in this set.

March of the Machine marks the conclusion of the Phyrexian stroy arc. It started with Dominaria United and continued with The Brother’s War and Phyrexia: All is One. So, in this set, we’ll see how the final battle against Phyrexian resolves.

Elesh Norn is finally ready to expand and bring the glory of New Phyrexia to the whole Multiverse. Her faction is called the Machine Legion, and it’s prepared to march, hence the name of the set.

On the packaging and promotional materials, we saw glimpses of multiple planes, and characters from various planes (including non-planeswalkes). This is unlike anything we’ve seen before, and aligns with what Wizards stated about this set – it will change Magic forever.

So what is the big change coming with March of the Machine? It’s only something that’s happening in the story, or will it actually change the mechanics of the game? To find out, we’ve searched for the answers on Blogatog, where Mark Rosewater, the head designer for MTG, answers questions from Magic players. Let’s take a look at a couple of interesting answers:

While this answer can be seen as ambiguous, it’s still pretty clear that there will be big changes both in story and in gameplay. On the question on how big those changes are going to be, Mark responded with:

Rosewater is managing expectations. He’s not saying that this will be the biggest change ever, and that’s to be expected, as there were many important changes in Magic. However, the changes are still supposed to be big, and that’s why we made some predictions as of what they might be.

Note that the things we’ll talk about in these sections aren’t guaranteed. These are just some fun possibilities that might, or might not happen.

This one is the most likely to happen, and it probably will – in one way or another. On the packaging we’ve seen hints of the following planes: Kaladesh, Kaldheim, Kamigawa, Ravnica, Strixhaven, Theros, and Zendikar.

We don’t know if the final battle will happen in multiple planes at once, or if all the planes will be somehow joined, but one way or another, the many Magic characters will battle together against Phyrexia. It’ll be interesting to see what Wizards have come up with.

One change that would certainly be a big one, would be the end of planeswalkers. Both for the lore – they would stay stranded wherever they currently are – and for the game play. There would be no planeswalker cards.

This change could be permanent, or it could be changed in the future. The return of planeswalkers would be a big selling point of a future set.

While this change is radical, it would be an interesting one.

Way back in 2008, there were talks of Universal making a Magic the Gathering movie. As you very well know, no movie was made. Since then many rumors circulated about a potential movie or series, but nothing ever materialized.

Most recently there was talk about an animated Netflix series, which was supposed to release in 2022, and once again the fans were disappointed. One of the possible difficulties with a series was where to start a story, as so much of Magic’s lore is already established.

Wizards might decide to use the March of Machine as a soft reboot as far as the lore goes. This would give them a clear starting point for a new series, which could bring in more Magic players.

However, based on the past events, this is quite an unlikely theory…

March of the Machine Product Line-Up

We mentioned before that many characters can be seen on the packaging. So, let’s take a look at it and all the products coming with March of the Machine set.

First up, the draft boosters. These are the boosters you want to get if you want to draft March of the Machine, or if you want to play Sealed. If you’re a returning player, these are what you’d call regular boosters.

If you plan to just open your boosters for fun, then Set boosters are the ones you want. They have more exciting cards than Draft booster, and better chance for multiple rares. They are a bit pricier, but you get the same amount of rares per dollar spent (on average), plus some alternate art uncommons.

If you’re planning on getting some Set boosters, but don’t want to go all the way to the Set booster box, the Bundle is a nice compromise. It contains 8 Set boosters, and while the price for them is usually slightly worse, than if you’d buy a box, you do get a lot of additional accessories. (Such as basic lands, promo card, dice, storage box). This makes it a perfectly fine buy.

The third main type of boosters are the Collector boosters. These are full of foil and alternate-art cards. While these are the most expensive ones, they do, on average, contain the most valuable and exciting cards.

The packaging hasn’t been revealed yet, as it contains big spoilers from the story.

March of the Machine Commander Decks

Commander players will probably be happy to learn that there are five Commander precons coming out with the March of the Machine. This is the big Commander release of the 2023, as most sets only get two decks.

There’s some speculation that there will be five mono-colored decks, each commanded by a different Praetor. You can find more information about the March of the Machine Commander decks here.

Finally, there are also Jumpstart boosters. The idea here is that you mash two of those together, your friend does the same, and you’re ready to battle against one another. This is a nice product for beginners, and casual players, but we wouldn’t recommend getting too many, as there aren’t a lot of different themes.

Before we wrap up, let’s take a look at various release dates for March of the Machine set.

*These dates are unconfirmed, they’re based on previous releases.

Anyway, that’s all for today. Once more March of the Machine spoilers become available, we’ll update this article with them, so make sure to check back soon.

You can also find more information about upcoming MTG sets here. Furthermore, if you have any speculations or predictions of your own, don’t hesitate, and leave a comment below.

Until next time, have fun, and may all your wishes for this set come true.