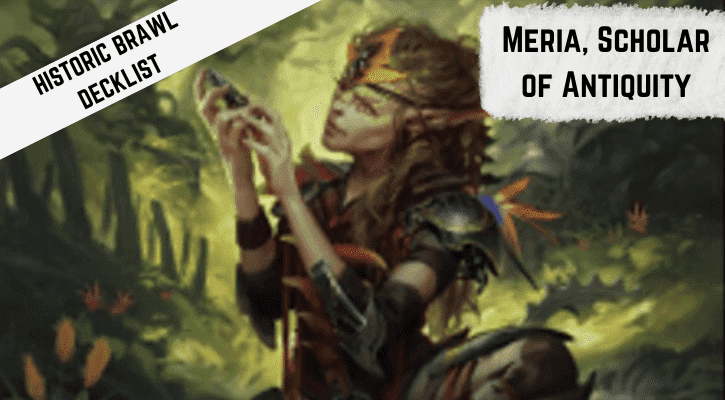 When I first saw Meria, Scholar of Antiquity, I thought this card is completely broken. My first built relied on Treasure tokens synergies, and I thought this will be a Tier 0 deck, and surely Meria will get a ban soon. Then I reread the card and noticed, that it said nontoken artifacts. Whoops, my bad. I went back to the drawing board and came up with this Meria, Scholar of Antiquity Historic Brawl decklist, which is still possibly broken.

Meria, Scholar of Antiquity offers you a lot of broken combos. It costs just three mana, and even though it doesn’t have an enter-the-battlefield effect, you can get value out of it, on the turn you play it, if you have artifacts in play.

You can immediately tap the artifacts in order to get either mana or some temporary card advantage. You can start doing so on turn three, provided you have enough cheap artifacts.

You probably saw this in the decklist – there are a ton of cheap artifacts in this deck. Their main goal is to work well with Meria, so we’re playing some pretty mediocre cards on that slots.

Some of them are hate cards, like Silent Gravestone, while others are useful in certain scenarios, like Pacification Array. There are some pretty bad cards included as well, just take a look at Inquisitive Puppet.

But you don’t really care what these do, as their primary role is to enable Meria, and they do so just fine. If you’ll upgrade this deck, I’d suggest you start looking into the other cheap artifacts that you could upgrade some weaker ones with. Just be careful that you don’t include too many non-bos, like I did on one of my early builds. I included Grafdigger’s Cage, which locked me out of casting cards with Mystic Forge

The Most Broken Legal Card

Paradox Engine is banned in Commander, but somehow not in Historic Brawl. With this deck, I’m certainly trying my best to get it banned.

Imagine you have it in play with some artifacts and Meira. You can easily draw your whole deck and get all the mana you need, therefore winning the game in one way or another. Just be careful that you don’t run out of time – that has happened to me once before. (Although it didn’t matter, as I made such massive advantage already.)

There are a lot of small synergies, which you’ll quickly find out once you start playing with the deck. I’ll list some of them:

That’s it for today. Before we part up, here are a couple of thoughts of how you can upgrade the deck. The cheap artifacts, as I’ve mentioned before could certainly use a second look, I’m sure there are many that could be upgraded with something better, especially, if you know which types of decks you’ll face. This deck also doesn’t have much interaction, as it leans heavily on the combo. You might want to add some removal spells, preferably if they’re artifacts themselves, like Dragonspark Reactor

If you have any suggestions about this deck, or if you want me to build a decklist for your favorite commander, that’s available on Arena, let me know in the comments. See ya!