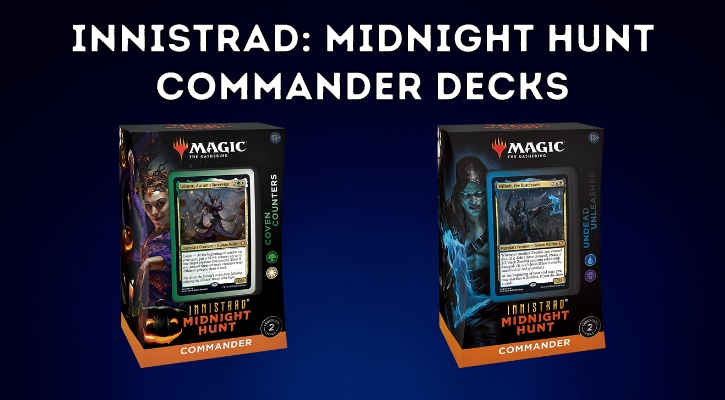 We’re going back to Innistrad! If you’re a Commander player, you definitely have something to look forward to, as we’re getting two Midnight Hunt Commander decks released alongside the main set.

For newer players – Innistrad is a Gothic Horror themed plane. The home of various monsters such as Vampires, Werewolves, and Zombies. We’ve visited the plane twice before, but this is the first time we’re getting the Commander precons released alongside it.

So in this article we’ll discuss everything you need to know know about these decks including decklists and new cards.

There are two Midnight Hunt Commander decks. One deck is Undead Unleashed and the other is Coven Counters. Let’s go into more details.

A with every Commander precon release, the big question is: Will Midnight Hunt Commander decks be intro decks or the full versions?

As you might know, Wizards released intro (or lite) Commander decks with Kaldheim, Zendikar Rising and Commander Legends. These decks aren’t as strong as some previous precons. Instead, the decks have fewer powerful cards, but their price was also lower. If you want an example, you can find Kaldheim Commander decks here.

With that said – Midnight Hunt Commander decks are fully powered. This means you can expect powerful decks with 15 exclusive new cards in each one and with exciting reprints.

Undead Unleashed is a Zombie tribal Commander deck. Wilhelt, the Roctcleaver is the main commander, and it’s the perfect one for this strategy.

You can find out how to upgrade the deck with our Undead Unleashed Upgrade Guide.

These are the 14 new cards that you get in the Undead Unleased Commander deck (besides the main commander).

You can get these card in the Undead Unleashed Commander deck.

The name is pretty straightforward. This deck cares about counters and the coven mechanic. That can also be seen from the head commander, Leinore. The green-white color combination, makes perfect sense with some old Innistrad cards like Gavony Township.

You can find out how to upgrade the deck with our Coven Counters Upgrade Guide.

These are the 14 new cards that you get in the Coven Counters Commander deck (besides the main commander).

You can get these cards in the Coven Counters deck.

Before we wrap up, let’s check the contents of each deck, which might be especially useful, if you’re purchasing a Commander precon for the first time.

Are you looking for more Commander content? In that case, you can check the following articles:

Until next time, enjoy Magic, and have fun with your Midnight Hunt commander decks!