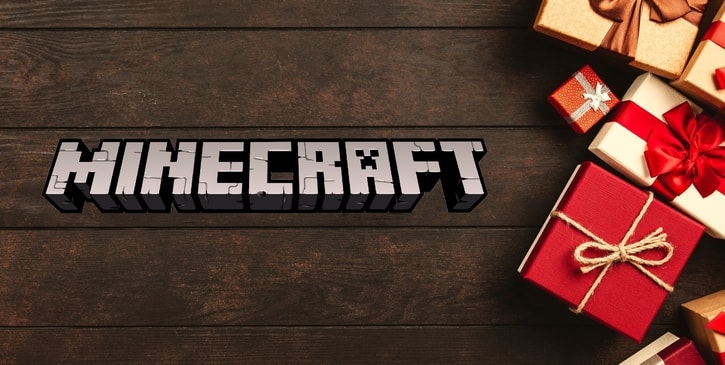 Are you looking for a gift for someone who plays Minecraft? That’s great, as we have many great gift ideas for Minecraft fans. In this Minecraft gift guide we’ll focus on gifts for kids, but you’ll also find some stuff for adult Minecraft gamers.

So without further ado, let’s get right to it!

If your giftee likes Lego bricks (who doesn’t?), you can’t miss with Minecraft themed Lego sets. Here’s a couple that they’ll enjoy.

This Crafting Box is a great gift for Minecraft fans. It contains five Lego minifigures of the popular Minecraft characters:

Remember how kids could usually just build one thing from their Lego box and that would be it? Well, that’s not the case here. Once one build is finished, you can take it apart and built a completely different one.

There are three different builds, which makes this product more interesting for a longer time. It contains 564 Lego bricks total.

If you’re looking for a something bigger, there’s The Ocean Monument, a popular structure that can be found in the underwater Minecraft world.

This box contains a whooping 1122 Lego bricks, which provides a bigger and more fun building challenge. The Temple has a very detailed interior with a secret entrance. The roof can be removed, so kids can easily play with the minifigures inside.

Of course, there are also plenty of other Lego Minecraft sets. You can find more of them on Amazon.

You can also get a Minecraft plush toy, if that’s something your giftee might enjoy. Great gift for younger Minecraft fans!

Does your giftee love both cats and Minecraft? If so, this gift will be the perfect one, as it features a cat from Minecraft. Isn’t it cute?

On the other hand, you can also pick something like this Steve plushie.

You can also find plenty of other Minecraft plush toys. Here are links to:

If you’re not sure which one to get, just ask your giftee which Minecraft character, monster or animal is their favorite. They’ll surely be happy to tell you.

Minecraft is already considered an educational game. However, that can be taken to the next level with books about Minecraft.

Even the kids that don’t like to read in general, will want to read books that are based on their favorite game. So getting Minecraft books as a gift is an awesome idea.

This official Minecraft Guide is a great one to start with. It contains 8 books, each one focusing on a different aspect of the game:

Great read for both new and a players with medium Minecraft experience. There’s a bunch of stuff in Minecraft that most players don’t know about – these books highlight some of it.

Even parents might want to shift through the books to find more about the game their kids enjoy so much.

This isn’t a guide, but more of a fantasy story. Five Minecraft players get transported into the game and they face all sorts of different adventures there. The first four books in the series are a great gift for young Minecraft players.

Minecraft can be played on various devices, from computers to mobile phones. Besides, it can also be played on Nintendo Switch.

If your giftee has Nintendo Switch, but don’t have the Minecraft game, this seems like a great gift for them.

Now this is probably the priciest gift on this list, but every kid would be really happy with a Nintendo Switch, especially if they get a Minecraft game alongside it.

There are countless other games they can play on Switch and as such it is truly a great gift.

Do you want to give a Minecraft themed gift, but one that will actually be useful? In that case you might want to pick some of the Minecraft themed clothing. This way the gift can be both useful, while still thematically tied to your kid’s favorite game.

For example, here’s a shirt that depicts Steve exploring the ocean along with various underwater animals from Minecraft.

As you can see this hoodie comes with a special mask so looks just like a Creeper (a type of silent monster from Minecraft). It’s an awesome gift for a kid who plays Minecraft.

Uno card game is very popular card game. This variation features almost the same game play, but all cards have art from the Minecraft game. There’s a special Creeper card, that makes you draw 3 additional cards when you draw it.

This can be a cool gift, unless the giftee already owns Uno cards.

Does your kid want to play just computer games? You can “trick” them into playing board games with this special Minecraft board game, called Builders and Biomes.

The game progress borrows various stuff from Minecraft lore. However, you don’t need anything about Minecraft to play the game. But if you know at least some basics it will enrich the game experience.

You’re trying to collect various resources, defeat the monsters and build fantastic structures. The game is made for 2-4 players and takes around 30-60 minutes. In general players should be 10 years or older, but some advanced younger kids might get it too.

The game pieces are quality made and the included instructions make the game play pretty clear. All in all, this is a great gift for Minecraft players.

For the final section of this Minecraft Gift Guide we picked various items from Minecraft that you can get as a gift. Some more practical and some just for fun.

This Minecraft sword looks just like a diamond sword from the game. Great both for playing and for costume parties.

Getting a nightstand light is a pretty boring gift for a kid. But what if it’s Minecraft themed? Then they might like very much. Here’s one example, a light with previously mentioned Creeper design, that glows green.

There are also plenty of other types of Minecraft lamps available on Amazon. You can follow the links to:

Another useful Minecraft gift is a wallet. It always comes in handy plus the Minecraft fans will enjoy how it looks.

That concludes out Minecraft Gift Guide. If you have any question, feel free to ask in the comments below, we’d be happy to help.

Finally, don’t forget that the best gift you can give is some quality time spent with your loved ones. Take some time to play Minecraft with them, it’s a pretty cool game. Even if you don’t like computer games in general, you might like this one. The kids will surely be very happy that you’re taking interest in their favorite game.

Hopefully, this article has helped you pick the perfect Minecraft gift. If you’re looking for more gift guides, you might want to check some of our other ones: