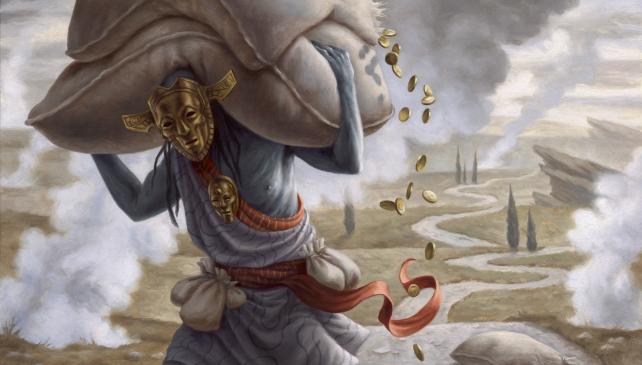 Mono Black Devotion is perhaps stronger than ever with the release of Theros Beyond Death. With the return of Gray Merchant of Asphodel, you can really win with a black decks.

You can import the decklist to Arena by clicking the icon in the top right corner. Then go to the Decks section in Arena and click Import.

The good thing is that the deck uses just three different cards from the new set. Two playsets of uncommons and a single mythic! This means that you might already have most of the cards, which makes Mono Black Devotion a budget friendly Standard deck.

Be warned that our version is made with Best of One in mind, so sideboard isn’t very tuned. Feel free to swamp it with cards that seem useful to you.

You probably know this combo if you played any Standard in the least three months. In case you didn’t here’s how it works once you have both in play:

You can repeat this process if you have multiple ovens in play. You can also block with Familiar and then sacrifice it. This way, you’ll still get a Food token and you also won’t take any damage from the attacker (unless it has trample).

Gray Merchant of Asphodel is a reprint from original Theros set. Since his name is so long, he often goes by “Gary”. It was strong back then and he’s still strong today.

Gary can be responsible for huge life swings in a deck like this. With cards like Ayara, First of Lochtwain he can easily deal 7 or more damage to your opponent. While gaining seven life for you. And gaining a bunch of life is never a problem, especially when you can turn it into card advantage.

Speaking of turning life to card advantage – this powerful artifact is the way to do it. Sometimes you’ll just cast it play 3-4 cards from the top, most of which will gain you life, cast a Gary or two and win the game on the spot.

Even if you just have Citadel in play, Gary will deal 5 damage to your opponent and you get 5 life that you paid for him back. Other times, you’ll just bury your opponent in card advantage. Try to keep your life total high, if you expect a Citadel soon.

Second ability doesn’t happen too often. You’ll probably win already if you have 10 non-land permanents in play. It’s still a nice bonus, and when it will come up – it will win you the game.

Ayara has 3 black symbols in her mana cost. What would normally be considered a dowside is a major benefit in this deck. She turns your expendable creatures such as Yarok’s Fenlurker and Witch’s Familiar into real cards.

The deck has only two different lands, but it matters in which order you play them. Start with a Swamp – this way your Castle Lochtwain comes into play untapped. Afterwards, play Castles before Swamps. Maybe you’ll draw Dread Presence. Swamp will trigger its ability, but the Castle won’t.

Once you have Bolas’s Citadel in play, don’t forget that if you draw a card with Ayara, you get to see another card. This way you can remove a some useless lands, and keep the chain going.

One thing sometimes comes up against decks that play Embercleave. If you have Tymaret, Chosen from Death and Ayara in play – you might want to block the double striker with Tymaret and then sacrifice him between first strike and normal damage. This way you get to draw a card, prevent half of the damage and you still draw a card.

Ability of Tymaret, Chosen from Death is very relevant. You can stop cards like Uro, Titan of Nature’s Wrath from escaping either by exiling them, or other cards in the graveyard. You can also exile opposing Cauldron Familiar, although it can be trickier. Try to do so when your opponent is out Food.

You can build Mono Black Devotion in lots of different ways. Here are some cards you might want to consider:

If you need some help with building your own deck check our deck-building tips.

Do you have any question about the deck? Did you build your own version of Mono Black Devotion? Let us know in the comments bellow.

This is all for today. Until next time, may your devotion always be so high, that your Gary does OHKO.