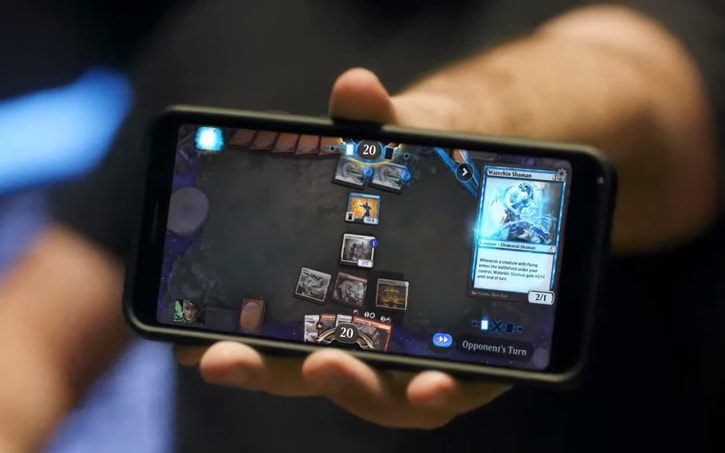 It has finally happened! After many rumors and moved released dated Magic: The Gathering Arena is finally coming to mobile. Everything starts with Andorid early access on January 28th, 2021. Support for iOS (and additional Android support) is coming later this year.

With that in mind I’ll talk everything concerning MTG Arena on mobile – early access, pros and cons plus plenty more. Let’s get to it.

Arena is still a fairly new avenue of playing this game. It came out of open beta in September 2019. Additionally, MTGA was only available on PC until late June 2020, when it was released on MacOS.

Players hoped for a mobile release for a long time. Wizards first confirmed MTGA Mobile release in the New York Toy Fair in February 2020. At first, we expected it before the end of 2020. However, the global pandemic resulted in this old time frame becoming uncertain.

Wizards of the Coast has already suffered issues due to COVID-19, including:

WotC cleared this up on the Zendikar Rising Stream. Sean Plott (or Day9 as he is more commonly known) talked about Arena Release coming soon. It was confirmed that Arena mobile is arriving in the fourth Quarter of 2020.

However, year 2020 ended and there was no sign of Arena coming to mobile. That is until the latest announcement, which told us about the Mobile Early Access.

When Will MTG Arena Be Released on Mobile?

The full release is set sometime in the future but if you have a modern Android device you’ll be able to use the Mobile Early Access and play it on January 28th, 2021.

A list of supported Androids was also posted alongside the announcement. Our favorite phone on the list was certainly Asus ROG Phone 3. It’s one of the best mobile phones for gaming. So if you’re considering getting a new phone, and want to make sure you’ll be able to play Arena smoothly, you can buy one on Amazon.

Additionally, you can find best phones for MTG Arena here.

How Will MTG Arena Work on Mobile?

Magic: The Gathering is over 25 years old, meaning that it has been undergoing development for an extraordinarily long time. The game has become extremely complicated with stuff like:

All of this can look almost implausible to work smoothly on a mobile device, especially if you have an older phone. So to help you figure if MTG Arena is a feasible option for your gaming needs, I have made a list of the pros and cons of introducing MTGA to mobile.

While Magic: The Gathering is no tactical first-person shooter, it still has an abundance of graphics and visual effects. Even toned down, the game is sometimes too much for a weaker computer to handle. However, a mobile version of this game means that the application will be optimized for the weaker machines – phones.

Hopefully the Arena will work on many different phones, but surely it’ll worker on the newer ones. These are still much cheaper than the high quality computers, which means that more people will be able to play Arena and test their mettle against other players.

Obviously, the best feature of smartphones is their portability, while still having most functionality of a computer. Now you can play MTGA on the bus, on your break, or even in the shower. (If you have got one of those waterproof phones, of course.)

Now while not everyone will feel the urge to play MTGA in the shower, the extra portability means playing Magic anywhere becomes easier than it ever has been before.

Then there are the people who would just rather play on their phones. Sometimes, all people want is the option to be able to play a game somewhere other than on a computer. Whether it is because their computer is updating, in repair, or if playing on phone is more fun, flexibility can be a huge bonus.

We already saw this with the card game Hearthstone. The majority of its players enjoy the game on mobile simply because they have the option to do so. By giving people who enjoy mobile gaming an option, MTGA has a new market it can potentially thrive in.

#1 Density of Interactions and Game Details on a Small Screen

As mentioned before, MTG has a huge number of effects and combos possible. Phones have extremely small screens compared to a monitor. So when you’ll have to stack multiple triggers or tapping multiple cards it might feel virtually impossible.

Even if the UI is designed in a way that this becomes a little easier, it is still sure to take more time than quickly using a mouse on a big computer screen.

This smaller screen with an abundance of in game details could also result in the player missing information. Whether that be the number of lands an opponent has, or whether they played a Goblin Chieftain or Goblin Warchief. Information like this makes or breaks a game of Magic.

#2 Weakness in the Phones’ Design

Additionally, phones with smaller bezels (like the new flagships major companies like Apple and Samsung produce) could result in accidental touches. Accidentally activating permanents like Priest of the Forgotten Gods or tapping the wrong lands can result in a quick game loss.

Hitting the power button on accident or dropping the phone are also issues that can possibly occur. This would virtually never happen on a PC or Mac.

Battery can also be a huge factor. If an iPhone runs out of battery, by the time you charge it and turning back on, the game might be over. Again, this is also a rare problem that needs to be dealt with on a computer.

A scary issue with MTGA combing on mobile is how much storage the app will eat up. The app eats up many gigabytes worth of storage on a PC, and while that number is sure to be smaller on a phone it will still be much larger than most games.

Maybe an expensive phone with tons of built in (or expandable) storage can deal with such a huge application, but most cheaper phones won’t be able to support this. Even if they can, MTG Arena will leave you little storage for other uses. This is not even considering updates and patches.

Sets release with tons of new cards and mechanics, all of which need to be added to your phone every three months. That’s without mentioning Remastered Sets and occasional patches.

The huge amount space needed may leave a bad taste in peoples’ mouths, making MTGA practically unplayable on most phones.

Like with most new games, MTGA has many small issues and bugs. These are still present in the PC version in the game. One can only imagine the number of problems the mobile application may have. Repetitive bugs could lead to some big problems for Arena on mobile.

The predicament this causes is that the development team for MTGA can only fix bugs as they show up in gameplay. So if the mobile app is not popular due to preexisting bugs, the game may never be fixed. Even if it is fixed, it may take an exceptionally long time.

By then, mobile gamers who were trying MTGA as they were already playing games like Legends of Runeterra or Hearthstone may go back to their original gaming passions.

The final con is that this may detract developers from optimizing the PC/Mac versions of the games. MTGA may be beautiful and thorough, but it is by no means perfect. It still has its own bugs and glitches, issues the player base as a whole would love to have fixed.

The risk with mobile coming to use is that developers may get caught up in improving that system – all the while forgetting about those that still play on PCs and Macs.

While I do believe that MTGA will have many, many problems and annoyances when it releases, I am still grateful Wizards of the Coast is releasing the game so early in 2021. COVID-19 has already caused many problems for gaming companies around the world. WotC is doing its best to fight through it.

The important thing to understand here is that we are being given a new option. While not all of us have to use this option, some may prefer it. Inspiring new players to join and play the game is always amazing and helps grow the Magic: The Gathering community. I personally found Hearthstone just because it was a mobile game, and I am excited for people to have that same experience with MTGA.

Well that is it for today! Thanks for reading. Please remember that all these pros and cons are my own opinion. I am sure that there are more factors to consider when evaluating the successes of MTG on mobile.

If any of you have any questions or just want to have a chat, feel free to contact me! I will probably be playing a game of Historic with some Mono Green spice.

You can also check my stream on Twitch. I go by complexartichoke, and I regularly stream budget decks for Standard and Historic on Arena. In addition, I also occasionally stream MTGO and more expensive competitive decks. So, if you enjoy crushing your opponents on a budget, make sure to give me a follow! You can also check out my Instagram @tanmay_illusions.

Furthermore, if you don’t want to miss new decks, give Card Game Base a follow on Facebook or Instagram. You’ll find reminders for articles, Daily Deals on Arena, some Magic memes and codes for Arena. Speaking of which, you can find all currently available MTGA codes here.