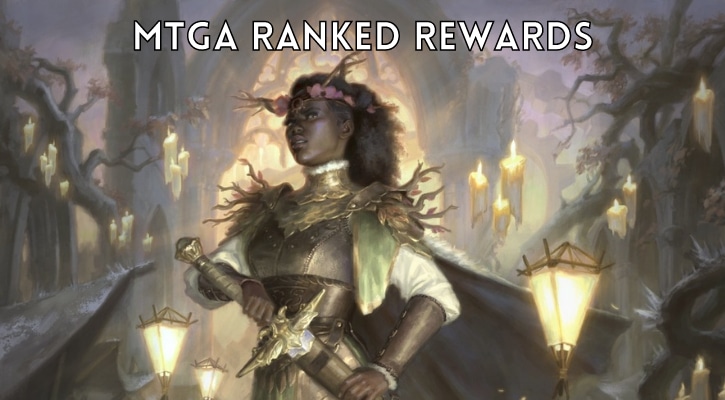 Here, we’ll answer some of the most common questions you might have about the MTG Arena Ranked rewards, including:

What are the MTG Arena Ranked Rewards?

The Arena Ranked rewards are, as the name suggests, monthly rewards for your performance in the Ranked mode. What you get depends on your final rank. You can see the rewards based on rank in this table:

Note, that these rewards aren’t cumulative. So if your final rank is Gold, you only get rewards that are written in that row, and not also all the previous ones.

How do you get MTG Arena Ranked Rewards?

You get MTG Arena rewards by playing on the ranked ladder. There are two separate ladders, one for Limited events, and one for Constructed, and you get rewards for both of them.

So if you’re Gold in Limited, and Platinum in Constructed, you’d get 5 Packs and 2,000 Gold. However, you’d still get just two card styles, since these are the same for both ladders.

Which rank is best for Ranked rewards on MTG Arena?

Obviously, you’ll get the most rewards at Mythic level. However, if you’re looking for most value par time spent, you should probably aim for Gold, or perhaps Platinum, if you value the rare card style.

When do I get the Ranked rewards on MTG Arena?

You get the Ranked rewards when the season ends. That’s usually at the end of the month, but sometimes it varies. You can find out more on the official MTGA Ranked Play page.

Are there separate Ranked rewards for Standard, Historic and Alchemy?

No. These all fall under the Constructed ladder, which means they have a combined rank system, and you only get one set of Ranked rewards. However, you can double your Ranked rewards by also playing Ranked Drafts.

There are multiple possibilities. Maybe it’s just a visual bug, and you did actually receive them. Check your Packs tab, and cosmetics.
Another option is that the Ranked season didn’t end yet. Try restarting your client.
Finally, it’s possible that there was a serious bug. In that case, your best bet is to contact the MTGA support.

If there’s another question that you have, ask us in the comments below, and we’ll get back to you as fast as we can.

That’s all about MTG Arena Ranked rewards. Since you’re probably an Arena player, don’t forget to check for MTG Arena codes, which will give you lots of free stuff, from booster to cosmetics.

Furthermore, here are some articles that you might find useful: