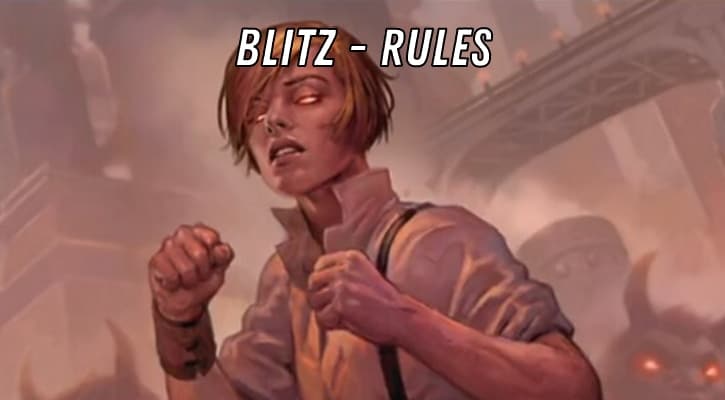 Blitz is a new MTG mechanic introduced with Streets of New Capenna, and it’s closely tied to the Riveteers family. In this article, we’ll talk about everything you need to know about it, including:

How Does Blitz Work?

Blitz is an alternative cost that can appear on creatures. If a creature has blitz, you can cast it for its regular or for its blitz cost.

If you use the blitz cost, that creature gets haste and “When this creature dies, draw a card.” But it doesn’t stop there – at the beginning of the next end step, you’ll have to sacrifice it.

So you have to decide if you want the creature to stick around (cast it for regular cost), or if you want some immediate impact (use the blitz cost). Let’s take a look at an example, to see how you might use it.

You can cast it for its regular cost (four mana), and it’ll stick around.

You also have the option to cast it for its blitz cost, which is one mana less. This way you’ll get an immediate impact, as it’ll get haste. You can attack and make one of your opponent’s creatures unable to block. You’ll have to sacrifice Jockey at the begging of next end step – if it won’t already die in combat. Of course, you’ll draw a card no matter how it dies.

Here are some question that you might have about the blitz mechanic. If you don’t find an answer you were looking for, let us know in the comments below.

When should I cast a creature for its blitz cost?

Do I still get to draw a card from a blitz creature if it dies before I’d sacrifice it in the end step?

Yes, you do. You’ll draw a card whenever a creature that was cast for its blitz cost dies.

Do I draw a card when my creature with blitz dies, if I cast it for its regular cost?

No, in order to draw a card when a creature with blitz dies, you have to pay its blitz cost.

Can I play a creature for its blitz cost on my opponent’s turn?

No, unless it has flash. Blitz is just an alternate casting cost, and it doesn’t change the timing restrictions of casting a creature. So if it doesn’t have flash you’ll have to cast in your first or second main phase.

Flavor here is pretty self-explanatory. The definition of blitz is “an intensive or sudden military attack” or “a sudden concerted effort to deal with something”. In either case, the mechanic fits the definition perfectly.

In this section we’ll discuss some interaction and play patterns that you might encounter when playing with blitz cards.

One way to get more value out of your blitz creatures is to sacrifice them in your second main phase (with something like Body Dropper).

This way you’ll get the value from your sacrifice outlet, and you still get to draw a card from your blitzed-in creature, which will certainly help you win the game.

You Want to be Aggressive

One thing to keep in mind when building a deck with blitz cards in it: you want to be aggressive. Only that way, you’ll be able to use all parts of the buffalo, as blitz doesn’t do much when you’re playing defense.

Of course, if a creature simply has good stats and abilities, and you don’t plan on using blitz anyway, then you can also use it in more controlling decks.

If you like both the blitz mechanic and the Commmander format, you’ll probably want to get the Riveteers Rampage precon.

At the head of the deck you’ll find Henzie “Toolbox” Torre. It gives all of your creature spells (that cost four or more) blitz, which is equal to their mana costs. But that’s not all – the more times you’ve cast Henzie, the cheaper your blitz costs become.

That’s all about MTG blitz mechanic. Hopefully, you’ll be able to use this mechanic to get some explosive wins.

If you like to crack packs, and you want to get some Riveteers blitz cards, you can buy a New Capenna Set booster box.

If you’d prefer more New Capenna articles, check out the following ones:

Until next time, have fun and and go for some victories with blitz.