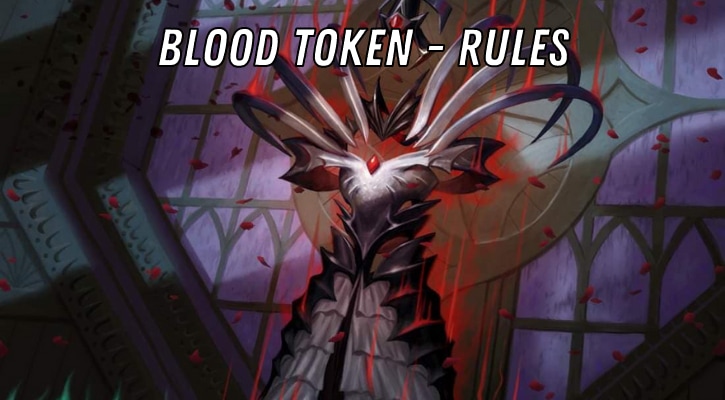 Blood token is a new, predefined token, introduced with Innistrad: Crimson Vow. In this article, we’ll talk about everything you need to know about it:

What is a Blood Token?

Blood token is a colorless artifact token. It has one ability that lets you pay one mana, tap it, sacrifice it and discard a card in order to draw a card.

So essentially you get a one time effect which lets you pay a mana in order to discard a card and draw a card.

There are various cards that make Blood tokens. There isn’t a specific rule as to how a Blood token can be made. Cards that make them, do so under various conditions. In that way, they are quite similar to Clue, Food, and Treasure tokens.

It’s probably best to look at some examples.

Here’s Gluttonous Guest, which is as simple as it gets for a Blood token maker:

You play Gluttonous Guest, and when it enters the battlefield, you’ll get a Blood token. Simple.

It also has another ability which gives you 1 life, whenever you sacrifice a Blood token. A nice little bonus. You’ll often see similar bonuses on cards that make Blood tokens.

Voldaren Bloodcaster gives you a Blood token whenever it or another one of your creature dies. That’s already a nice effect on a 2/1 flyer for two. There’s a bonus effect here as well.

Whenever you create a Blood token, it checks if you have five or more Blood tokens. If you do, you get to transform Bloodcaster into Bloodbat Summoner. So, while the backside doesn’t make Blood tokens, it can turn the ones you already have lying around into 2/2 flying Bats.

As you can see, there are quite a lot of ways to make and use the Blood tokens.

Can you use a Blood token with zero cards in hand?

No, you can’t. Discarding a card is a part of the cost, which means you need to discard a card in order to draw a card.

Can you have multiple Blood tokens in play at once?

Yes, you can. The tokens aren’t legendary, so you can have as many as you want in play.

Why can’t I use the Blood token on Arena?

There might be a bug, but more often than not that’s not the case. Here are just some reasons why you couldn’t be able to use the token:

How to destroy Blood tokens?

You can destroy Blood tokens with anything that lets you destroy artifacts. For example, Naturalize can destroy a single Blood token, while Creeping Corrosion get rid of all of them. However, if your opponent has mana available, they can activate their Blood tokens in response to still get their effects.

If you have a question, that we didn’t answer — leave a comment below. We’ll try to answer it as fast as we can.

Blood tokens are closely tied to Innistrad Vampires, so the flavor is pretty straightforward. Vampires like blood, and these tokens represent that.

In this section we’ll talk about various interaction with Blood tokens. These are by no means all of them, just some that have caught our eye.

Strefan, Maurer Progenitror isn’t just a Vampire tribal commander. He can also be a commander for a dedicated Blood tokens deck.

It makes Blood tokens at the end of turn. You get one for each player who lost life that turn – including you. As you can imagine, it works at its best at a multiplayer game.

Furthermore, you can sacrifice two Blood tokens when it attacks to “cheat” a Vampire into play. Yet another great use for Blood tokens.

Furthermore, you can also use them for affinity for artifacts, enabling metalcraft, and other artifact-based mechanics.

If we focus on what the Blood token actually does, we quickly notice some synergies with the madness mechanic. If you’d discard a card with madness, you can instead cast it for its madness cost.

So you can use a Blood token to discard a card with madness — then cast it, and still get to draw a card. What’s not to like? One example of a card that you could use is Stensia Masquerade.

It’s a cool card to play in a Vampire tribal deck. When you use the madness cost, you can play it at instant speed as well, which can surprise an unsuspecting opponent.

That’s all about the Blood tokens. Now you probably know how to use them to your full advantage. However, if there’s a question that’s still bothering you, feel free to leave a comment below, and we’ll get back to you as fast as we can.

Anyway, that’s it for today — until next time, have fun and create a ton of Blood tokens.