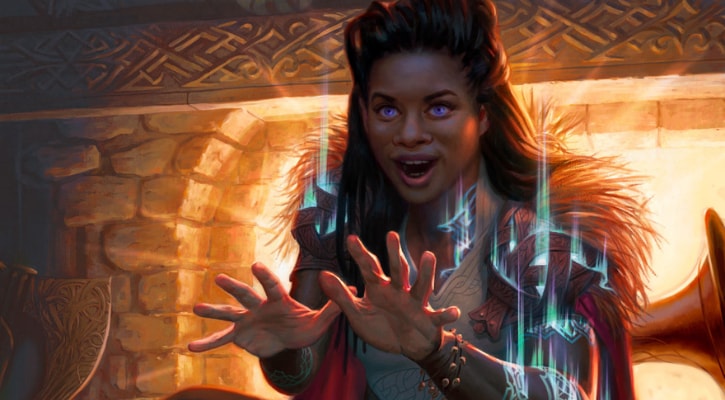 Boast is a new MTG mechanic introduced with Kaldheim. In this article we’ll talk about everything you need to know about it:

While the MTG boast mechanic is pretty straightforward, it still has some interesting interactions, that can allow a good player to gain an advantage. So let’s get right to it, and see what boast is about.

How Does Boast Work?

Boast is a keyword ability, that appears on creatures.

This ability can only be activated once per turn and only if that creature attacked that turn.

Once you attack with Hagi Mob, you can use its boast ability. You can use it at any time you have priority, after you attacked with it.

This means you can use it before blockers are declared. If an opponent has a creature with one toughness, you can get rid of it before it would be able to block.

You can also use it after the blockers are declared. You’ll want to do that, if Hagi Mob would die in the combat.

You’ll want to be especially careful with your timing with cards like Goldmaw Champion. Immediately after you attack, you have a priority. So don’t pass it to the blockers step, if you want to get rid of a blocker.

Instead, use Champion’s ability immediately after you attack. Once your opponent declares a creature as a blocker, tapping it doesn’t do anything.

Can I use a boast ability twice – if a creature has double strike?

No. You can only use boast ability once a turn, no matter how many times a creature has dealt combat damage or attacked. The only exception to that rule are cards that specifically state, that you can activate boast abilities multiple times.

Can I use a boast ability on my opponent’s turn?

(Before someone brings it up – Party Crasher is silver-boarded.)

Can I activate boast abilities on different creatures in the same turn?

Yes. The restriction once per turn applies to each creature separately. So if you have two creatures with a boast ability, and both of them attacked, you can use both of them. (That’s also true if the creatures have the same name.)

Boast flavor is pretty straightforward. Someone attack and is now ready to boast about their epic deeds. Boast ability can be activated even if the creature will die afterwards. Apparently, you don’t have to be successful, just brave enough to boast around.

Let’s take a look at some cards that work well with the boast ability.

Birgi enables your creatures to boast twice per turn. Makes sense, given she’s God of Storytelling. Creatures still have to attack in order to boast.

Dragonkin Berserker reduces your boast costs by one generic mana per dragon you control. If you don’t have dragons you can just make some with his own boast ability. New dragons will make further boast activations cheaper.

Frenzied Raider is a nice card for a dedicated boast deck. When you activate a boast ability, it gets a counter. As you can activate boast abilities during the combat, Raider can be really hard to block in the right draft deck.

As you want to attack with your boast creatures, they fit best in an aggressive deck. Naturally, they’ll work great with combat tricks, which can help them survive combat. For example, Run Amok can be very good when you draft a deck with lots of boast creatures.

With enough mana, you can safely attack with two boast creatures and use their abilities.

That’s all about the MTG boast mechanic. Hopefully, you’ll be able to use the information provided here to your advantage.

If you want to learn more about Kaldheim, you can browse the Kaldheim spoilers page. Also, don’t forget to check if you used all MTG Arena codes here. Additionally, once Kaldheim releases, you’ll be able to claim 3 free Kaldheim boosters as well.

Until next time, have fun and may your Magic wins be worth boasting around.