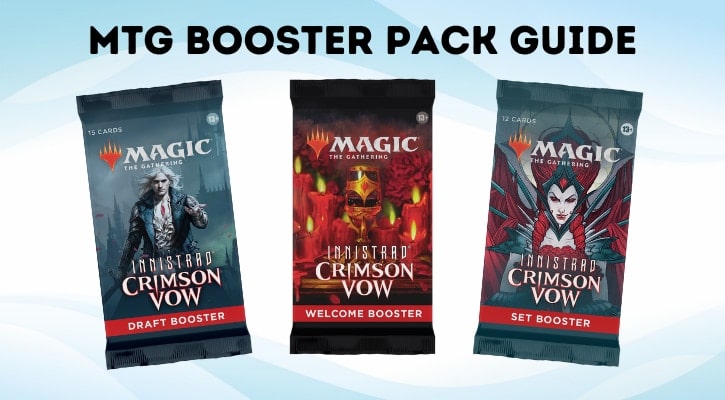 Seriously, how many different booster types do we have now!? If you just started with Magic, or if you’re returning after some years, you might be overwhelmed with so many options. Don’t fear, though, as I’ll explain everything in this MTG Booster Pack Guide.

Zendikar Rising first introduced Set Booster packs. So figuring which packs to buy was stressful. Normally, my fiancé and I would buy a box and split it, but we had no idea which box would be better. We did our research, but in the end we bought a Draft Booster box and Set Booster box to try to explore which one is better for us. Plus, we both really wanted Nissa of Shadowed Boughs.

Even though that was sometime back, the stuff I’ve learned is still applicable today. With that said, let’s get right to it.

Note: If you’re looking for information about the newest Double Masters set, this one works a bit differently, so you should check our Double Masters 2022 Booster Guide.

Each one has their pros and cons, and I’ll compare them and give general ideas on what types of players would prefer each one. This way, you’ll be able to find the perfect booster pack for you.

I’ll take the recent set – Kamigawa: Neon Dynasty for examples of boosters. If you’re buying boosters from another set, no need to worry. The rare slots are approximately the same with all the newer editions.

So here they are ordered by price, from least to most expensive

Draft Booster packs are regular boosters, the normal ones that we’ve been buying for decades. They have 15 cards with usually 1 rare or mythic and a slim chance of a second one in the foil slot.

Draft Booster are, as the name implies, the best packs for draft games. They tend to be cheaper and since they usually contain exactly one rare or mythic it makes a more balanced draft with friends.

If you want multiple rares, they aren’t the best packs to get. With less chance of rares compared to other pack types, these are worth buying if you want to draft, or if you just want the cheapest option.

Set Boosters were introduced with Zendikar Rising, which makes them the newest type of booster. They have a total of 12 cards with a chance at 1-4 rares/mythics.

The math behind how many rares and mythics in each pack is insane, with different probabilities. There’s far more math than any other pack type. They also started titling each slot in the pack, which is very confusing unless you read about it. You can find a detailed guide about Set Boosters here. There you’ll find that on average, each Set Booster contains 1.34 rares.

Wizards also introduced The List, several reprints of cards from older sets that will randomly appear in some Set Booster packs. Honestly some cards seem kind of random to me, but I can see some players somewhere being glad to get something unexpected. These boosters also sometimes have cards that are new to Commander format, and don’t appear in the main set.

If you want to just try your hand at pulling rares, these are the boosters for you. With 1-4 boosters per pack each pack has a good probability of getting a good amount of rares and mythics. They’re priced in the middle compared to other Booster types, and are a good middle ground between Draft and Collector Boosters.

If you’re buying boosters just to open them for fun, these are certainly more exciting than Draft Boosters.

Theme Boosters first appeared in Dominaria. You’ll often see them at Walmart and other similar stores. Each pack focuses on a theme. Usually the themes are one of the five colors and maybe a sixth theme of all colors.

With some Theros Beyond Death, Wizards introduced special rares, which only appear in Theme Boosters. They can be strong cards, however the probability of getting them isn’t that high, so don’t buy these pack just for that chance.

These packs are great for players that are seeking a specific color. My fiancé loves green and white and hates blue, so I’ve found these packs are perfect gifts for her since she’s completely tired of pulling blue Planeswalkers. (I have so many Teferi cards because of her.)

These packs contain 35 cards with 1-2 rares, so if you care only about rares these are usually the worst packs to pick. You’ll also end up with tons of extra commons and uncommons, which isn’t too bad but can get annoying depending on storage and how many packs you get.

I find these packs are better as gifts for new players or players that love specific colors.

Collector Booster is the most expensive one. However, it also has the greatest number of exciting cards. Very high risk, high reward. So far the two best Collector Boosters are from Ikoria and Zendikar Rising. You can take a look at the following two articles to find more about their contents:

You can also find the list of all Collector Boosters here.

In general each pack has 15 cards with 1 double-sided token. They usually have 4 rares or mythics and the rest are commons and uncommons. All cards are either in foil or have alternate art (borderless, extended or completely special artwork). Here are just a couple of cards that you could get in Midnight Hunt Collector Boosters:

With all that being said, the cost difference tends to be significantly higher than any of the other booster types. As the name implies, these tend to fit better for collectors instead of your average player.

Collector Boosters also have the most foils of all pack types, which is great for anyone that loves to foil their decks. The fact that each pack has a double-sided foil token is also a plus for me since I love token decks.

Which MTG Booster Pack to Buy for Draft?

If you’re buying booster packs for draft, you should, as I said, just pick the Draft Boosters, as that’s what they’re designed for. On average, each player will open slightly more than three rares per pack. (Because you could get a foil rare.)

However, could a draft also work with other boosters?

Set boosters each have 1-4 rares, meaning with three packs per person each person could get 3-12. On average each player will actually open around 4 rares per draft. This could unbalance play if one person has more good rares when you’re playing. It also is just a bummer playing and seeing someone get significantly better pulls than you. They also contain just 12 cards each, so you might actually need 4 packs per person for a reasonable draft experience.

I’ve thought of the idea of using Theme Boosters for a draft. It’ll be fun if everyone wanted to be mono-color. But that also means each person will get less rares total at the end of the draft since you’ll really just need one pack per player with each pack having 35 cards.

While I imagine it’ll be fun to play a draft with Collector Boosters, I don’t see myself being rich enough to do so.

So all thing considered, just stick to Draft Boosters, if you want to draft. In case you’re new to drafting, you can learn how to draft here.

Finally, there are two more boosters, I just wanted to quickly mention. These are not main boosters, and they aren’t released with every set, so they aren’t included in the main part of this MTG Booster Pack Guide. Let’s take a look at them.

The Welcome Booster is a product that new players could get for free. How? By going to their LGS (Local Game Store). You can ask the staff about what they recommend for beginners and if they perhaps have a Welcome Booster, that you could get. Keep in mind that not every store will have these in stock, especially since the product is quite dated nowadays.

Each Welcome Booster contains the same cards. The first version of this product had Niv-Mizzet, Parun and Garruk, Primal Hunter as the strongest cards. The newest, Zendikar Rising version has Bruna, Light of Alabaster and Vraska the Unseen.

VIP Edition Boosters was made only for Double Masters edition (so far). It’s the actual most expensive MTG booster pack, costing approximately the same as a whole box of regular boosters.

So you can imagine it includes some goodies, and it definitely does. Each Ultimate Masters VIP Edition contains 33 cards (23 of them in foil) and 2 foil tokens. The most sought after cards are the 2 borderless Box Toppers that every pack gets. You can find more about the VIP Booster contents here.

So every pack has its pros and cons, so each type is better for specific players. It also depends on each set since they have been changing each Booster type over the years.

Earlier I mentioned buying two boxes with my fiancé. We got tons of great pulls from the Draft Booster and Set Booster boxes. While we got more rares from the Set Booster box, each box had tons of amazing cards.

Also remember that each booster type is going to drastically different depending on the set, so make sure to research each set before you buy packs. Comment below if there is anything you want to add, or if you want to brag about your pulls.

Anyway, that’s the end of this MTG Booster Pack Guide, hopefully you found out which Booster Pack to buy for yourself. Until next time, have fun, and may your boosters contain many exciting cards.