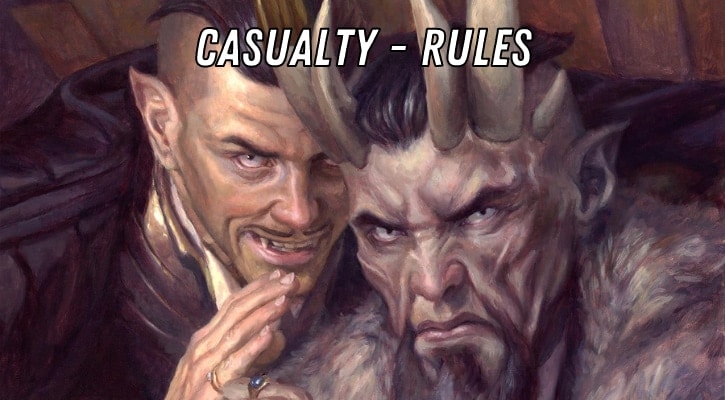 Casualty is a new MTG mechanic introduced with Streets of New Capenna, and it’s closely tied to the Maestros family. In this article, we’ll talk about everything you need to know about it, including:

How Does Casualty Work?

Casualty is an additional cost that can appear on various spells. If a spell has casualty X, that means that you may sacrifice a creature with power X or greater in order to copy that spell.

Pretty straightforward, right? Let’s take a look at an example.

You pay five mana, and then you have to decide if you’ll sacrifice a creature with power 3 or greater.

Essentially, you get to turn a creature into another tutor.

Here are some questions that you might have about the casualty mechanic. If you don’t find what you were looking for, let us know in the comments below, and we’ll answer you as fast as we can.

Do I need to choose the same targets for the spell that I copied with casualty?

No you don’t. You get to choose new targets, or you could also choose the same ones. It’s your choice.

Can I use the casualty on the copied spell too?

No, you can’t. The copied spell goes directly on the stack. This means that it was never cast, so you can’t pay its casualty cost.

When should I pay the casualty cost and when not?

You should pay the casualty cost when the copied spell would be better than the creature you’d sacrifice.

How do counterspells work against casualty?

Counterspell can be used to counter either the original spell with casualty or the copy. However, you can’t counter both with a single counterspell.

Can I sacrifice multiple creatures to a single casualty ability?

Maestros are quite ruthless. They don’t care who they hurt when they’re trying to get what they want. So if they want a copy of a spell, they’ll get it – even if that makes for some unfortunate casualties.

In this section, we’ll talk about some play patterns and other interesting interactions about the casualty mechanic.

There’s one neat thing that you can do with instants that have casualty.

When your opponent tries to kill your creature, you can respond with A Little Chat, and sacrifice the unlucky creature. This way, you’re essentially getting the copy for free, as your creature would die anyway.

Anhelo is a 1/3 deathtoucher that gives the first instant or sorcery spell you cast each turn, casualty 2. This means that you can get a lot of value out of your random small creatures.

Let’s talk about what are the best creatures to sacrifice with the casualty ability. You don’t want to sacrifice real meaningful creatures, unless the copied spell is very good. The better sacrifice fodder are cards like:

If you’ll use card like that, then you can get a lot of value out of your casualty effects.

That’s all about the casualty mechanic. Hopefully, you now know how to use it to its fullest, and you’ll be able to win many games with it. If you want to try your luck and open some Maestros cards with casualty, you can get yourself a New Capenna Set booster box.

Additionally, if you’re looking for more information about New Capenna, you can check the following articles:

Until next time, have fun and may you always have enough disposable creatures to use them as casualties.