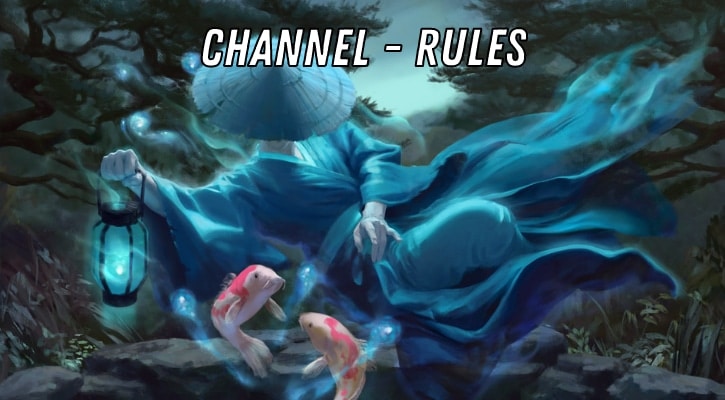 Channel is an MTG ability word, first introduced way back in Saviors of Kamigawa (2005), It came back in Modern Horizons 2, and recently returned with Kamigawa: Neon Dynasty. In this article, we’ll talk about everything you need to know about channel, including:

How Does Channel Work?

Channel is a pretty simple ability.

If a card has channel, you can pay its channel cost and discard it for an effect.

Essentially, these cards give you two options — you can either use them for their regular effect, or for their channel effect. So they are quite similar to the split cards, with some technical differences.

You can pay three mana, and simply cast it as a 2/1 creature. It has the ability to pump target creature with +2/+2 until end of turn.

On the other hand, you can also use its channel ability. You can pay four mana, and discard it in order to give target creature +4/+4 until end of turn. So you’re essentially getting a creature or a pump spell. Versatility is always useful.

In Saviors of Kamigawa, only Spirits had this ability. Channel effect was similar to the card’s regular effect. As you saw with the Ghost-Lit Nourisher — it had pump ability as a creature, and its channel effect was also a pump spell.

It looks like this is about to change, as we saw from some early Neon Dynasty leaks.

Here’s Eiganjo, a legendary land from Neon Dynasty. You can simply play it as a land, which comes into play untapped and provides one white mana.

However, you can also use its channel ability for three mana (or less, if you have a couple of legendary creatures in play). This way, you get to deal 4 damage to target attacking or blocking creature.

It looks like there will be a cycle of five such lands. These look pretty strong, as they can provide some use for unnecessary lands in the late game.

Here we’ll answer some of the most common question about the MTG channel ability. If your question isn’t answered, leave a comment below. We’ll get back to you as fast as we can.

When can I play a card with channel?

Can I activate channel ability from a graveyard / battlefield?

No. In order to activate a card’s channel ability, you have to discard that same card. You can only do that if the card is in your hand.

Cards with channel can channel their inner energy into a special effect without them becoming a creature. At least that seemed to be an idea in the Saviors of Kamigawa, when channel only appeared on the Spirits. Now, with the effect on lands, the flavor certainly gets a bit muddled.

There aren’t that many weird interactions with channel. Nevertheless, we still have some interesting tidbits for you.

When you use a card for its channel ability, you have to discard it. So this also triggers your cards like Surly Badgersaur.

So you’ll get double value from your cards. First from the channel effect, and then from your cards that care about you discarding stuff. Some other examples, besides the Badger include cards like:

If you’re a more experienced player, you surely know about this one. However, this is an interesting tidbit for newer players. It’s about the card, called Channel.

It’s a very strong card, as it lets you cast expensive cards like , if you have a high enough life total. However, even though it’s named Channel it does absolutely nothing with the Channel mechanic. Flavor fail — although an acceptable one, as the card was made around 13 years before the channel ability.

That’s all about the channel ability. Now you should be able to use everything you learned here to your advantage. In case you want to improve your MTG game further, here are some articles that might interest you:

Until next time, have fun and channel your inner power into your awesome Magic plays.