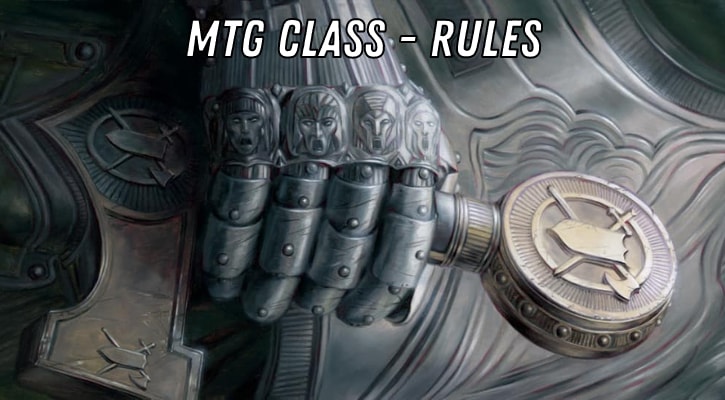 Class is a new MTG card subtype introduced with Forgotten Realms. In this article, we’ll talk about everything you need to know about it, including:

This way, you’ll be able to use of this mechanic to its fullest.

How Do MTG Class Cards Work?

Each Class card has three class abilities / levels. When you play a Class card, you get access to the first ability immediately.

You can then pay its level 2 costs to add its second level effect to the card. Once you reach the second level, you can advance to the third one and get the card’s full effect. You can only level up at sorcery speed. (That’s during your first or second main phase.)

Let’s take a look at Wizard Class as an example.

So you pay one blue mana, and you get the Level 1 effect (in the top square). So you have no maximum hand size.

At some point later in the game – or immediately, as Classes don’t have summoning sickness, you decide to pay it’s level 2 costs – three mana, one of which must be blue. Now you get the second effect as well. With this particular Class, this is a triggered ability. So, when Wizard Class becomes level 2, you get to draw 2 cards.

Afterwards, you can pay its level 3 costs. That’s five mana, one of which must be blue. When you do so, you get the final effect as well. Whenever you draw a card, you get to put a +1/+1 counter on one of your creatures.

Does a Class card lose its previous effect when you level it up?

No. Class cards keep all the previous effects when you level them up.

Why can’t I level up my Class card on Arena?

Most likely, you were trying to level it during your opponent’s turn. You can’t do that, as you can only level up Class cards at sorcery speed.

If that isn’t the case, then it’s possible that there’s an effect like that on Academic Probation. So something that prevents you from activating your Class card.

Can you have multiples of the same Class card in play?

Yes. As long as they aren’t legendary, you can have as many of the same Class cards in play as you want. (So far, there are no legendary Class cards.)

Can I level up a Class card multiple times per turn?

Yes, you can. You can advance to level 2, and afterwards to level 3 in the same turn. Of course, you need to have enough mana to do so.

Adventures in the Forgotten Realms is a DND themed set. In Dungeons and Dragons, your character has a class (like Fighter, Monk, Cleric, etc.). During the gameplay, you advance (level up) your character’s class.

This is represented quite nicely with the MTG Class cards. At first, they might be somewhat weak, but they do get better as the game progresses.

That’s it for MTG Class cards. Hopefully, you now know how they work, so you’ll be able to use this knowledge to your advantage. If there are some other questions you have, feel free to ask us in the comments below, and we’ll get back to you as fast as we can.

If you’re a Commander player, you’ll probably be happy to learn that here are four new Commander precons being released. You can find more information about Forgotten Realms Commander decks here.

Until next time, have fun and may you always level up your game!