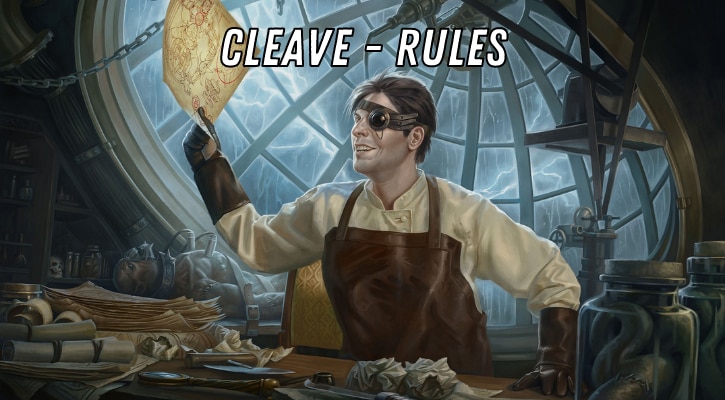 Cleave is a new MTG keyword ability introduced with Innistrad: Crimson Vow. In this article, we’ll talk about everything you need to know about it:

How Does Cleave Work?

Cleave appears on instants and soreceries. If a card has a cleave cost, you have two options.

The first option you have is to cast it for its regular mana cost. (That’s the cost in the top right corner.) If you do, you, you get the spell’s effect, as it’s written on the card. The brackets (“[“ and “]“) don’t do anything.

The second option is to cast it for its cleave cost. (That’s the cost in the rules box.) If you do, you get the spell’s effect, but you ignore the words written in the brackets.

Let’s take a look at an example, which will make everything clearer.

Here’s an interesting card with cleave, called Dig Up.

So the first option you have, is to pay a single green mana. In that case, you’ll get to search your library for a basic land card, reveal it, and put it into your hand.

The other option you have is to pay four mana (two black, one green, and one of any color) — that’s the cleave cost. In that case you get to ignore the parts of text that’s in the brackets. This means that you get to search your library for a card, and put it into your hand. Now, that’s a big improvement!

Most of the time, paying the cleave cost will improve the card. However, that’s not necessarily always true. Lantern Flare is an interesting card with cleave.

Sometimes you might have five creatures in play, but only four mana total. In that case paying the regular cost would be more useful, than paying the cleave cost.

So, the best way to evaluate the cleave cards is to treat them as cards with two options, similar to the split cards or double-faced cards.

If I have a card that allows me to cast a spell with cleave from a graveyard, can I use the cleave cost?

Yes, you can. Paying the cleave cost doesn’t require that you cast it from your hand. So, if you have a Snapcaster Mage and target a card with cleave in your graveyard, you can cast it for its regular or its cleave cost — the choice is yours.

Do I get to pick which word to ignore when paying the cleave cost?

No. You ignore all the words in the brackets, and that’s it.

Didn’t I see a cleave card before Crimson Vow?

You might’ve seen something very similar in a Mystery Booster. There was a playtest card, with pretty much the same mechanic, called Greveyard Dig.

The card did pretty much what the cleave does, although it wasn’t a named mechanic just yet.

The definition of the word cleave is:

“to split or sever (something), especially along a natural line or grain.”

So you’re tearing out words from a rules box of a Magic card, and that’s where the name comes from. In contrast to some other mechanics, the flavor is purely mechanical, and not lore-wise.

In this section we usually talk about the weird interactions that the cards with the mechanic enable. However, cleave is pretty straightforward, and there aren’t special interactions worth mentioning. If you do somehow find one, that you feel we should mention, write a comment below, and we’ll add it!

That’s all about the cleave rules. Hopefully, you now know how it works, and you’ll be able to use this knowledge to your advantage. However, if there’s another question that you have, feel free to leave a comment below, and we’ll get back to you as soon as possible.

If you want to try your luck, and open some cards with cleave, you can purchase a Set Booster Box on Amazon.

For more information about Crimson Vow, check the following articles:

Until next time, have fun and may you always have enough mana to pay your cleave costs.