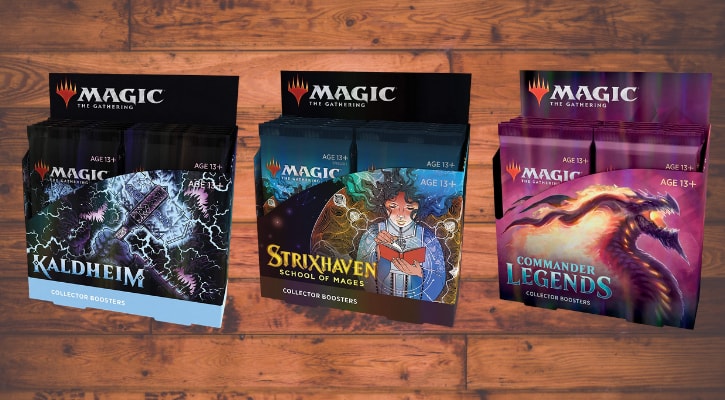 First MTG Collector Booster came out with Throne of Eldraine in October, 2019. Since then many others were released. So if you’re deciding which Collector Booster Box is best to buy, you can have a hard time picking the right one.

That’s why we organized this list of all MTG Collector Boosters that were released so far. Each one has their own special art style, and you will also find those below. With that said, let’s get right to it.

This set marks yet another return to the popular plane of Innistrad. It’s the home of various horrors – Zombies, Werewolves, and more. For the first time ever, an Innistrad set gets a Collector Booster.

The most breathtaking styles are probably the white-black Eternal Night cards. Just take a look at the new version of Sigarda:

Each legendary creature in the set gets this style. Well, except for Werewolves and Warlocks. Why? Because they got the special Equinox styles instead.

These have special frames and alternate artworks. So if, you’re a fan of Werewolves, this is a can’t miss product. Especially, because there’s finally a proper Werewolf commander, Tovolar.

Of course, you can also expect some borderless and extended art cards here as well.

Fans of Dungeons and Dragons, rejoice! Magic the Gathering will get a DND themed set. Of course, a Collector Booster will be released alongside it.

The main attractions are certainly cards that use the original DND Rulebooks styling. You could even get Drizzt Do’Urden, one of the the most known DND characters!

You might also get some of the amazing borderless cards, such as the famous dragon Tiamat:

As the name suggests, the set was made for Modern. That’s why the power level is quite high with this set. The higher price also reflects that.

However, this Collector Booster certainly delivers with some amazing card styles and treatments. The two most notable ones are old border cards and sketch cards. Here’s a couple of examples:

On the left you see a card with the old border, which was used before the Modern frames. On the right, you can see a sketch card, which has a special frame in addition to a sketch instead of the regular art.

In addition to these, there are also some spectacular borderless cards (cards with alternate art which extends to all borders). Just take a look at Cabal Coffers, for example:

Modern Horizons 2 Collector Booster is certainly one of the more exciting ones. It’s a great choice if you’re looking for strongest cards with amazing alternate arts.

The most exciting part of the Strixhaven Collector Booster are definitely Mystical Archive cards.

These cards are some of the most popular sorceries and instants from all over Magic’s history. While you can also get them in regular Strixhaven Boosters, there’s a twist when in comes to the Collector version. In each one of them you also get a special Japanese alternate art version. Here’s an example of a Demonic Tutor and its Japanese alt-art.

You can find all currently known Mystical Archive cards here.

All in all, this looks like a pretty exciting Collector Booster Box to get.

Do you like Vikings? If so, then Kaldheim is a great set for you. It’s a Magic’ take on a Norse world. The special Viking showcase styles look pretty neat, as you can see on Sarulf, Realm Eater.

Each Kaldheim Collector Booster also contains a foil Snow-Covered Basic land. So if you’re looking to pimp your snow themed deck, these boosters might not be a bad idea.

Finally, there’s a special card that you might get – it’s the Phyrexian version of Vorinclex, Monstrous Raider. It’s Doubling Season that comes with a body! A quite powerful one, indeed.

It’s one of the very few cards in the Phyrexian language and it looks absolutely amazing.

As the name suggests, these Collector Boosters are perfect for Commander players. You can find all Commander Legends cards here, and you’ll see that there are a ton of staples, plus various fun cards.

While these Boosters don’t contain alternate art cards – except the two planeswalkers Tevesh Szat, Doom of Fools and Jeska, Thrice Reborn – they do have extended art versions of popular Commander cards. That’s not all though, as all legendary creatures have the special foil versions.

They are called etched-foils. They do have an etched, and slightly grainy look. While they probably aren’t everybody’s cup of tea, most players do like them.

Anyways if you’re looking for some cards to pimp your Commander deck with, you can’t go wrong with getting a Commander Legends Collector Booster Box.

Zendikar is a land-matters plane. That’s reflected in its Collector Booster as well. First up, every card with landfall has a special Showcase art version.

Next, there are borderless cards – both the Pathway lands and Planeswalkers got the borderless treatment with alternate art.

However, the most exciting part are definitely the Zendikar Rising Expeditions. These are various powerful lands from all over Magic’s history.

Non-foil expeditions were available as Box Toppers. You get one with every Draft and Set Zendikar Rising Box. However, with Zendikar Rising Collector Booster Box, you get two!

All in all, this product is great for anyone who wants to get some very cool looking (and very playable) lands.

Core 2021 contains 5 mono-colored planeswalker. Each of them got:

Besides the five mono-colored planeswalker, there also one powerful colorless one.

Ugin is perhaps the biggest selling point of the Core 2021 Collector Booster. It has two different versions, and both of them look quite stunning. It’s definitely the chase card from this box (especially the foil versions).

Apart from Ugin, and full art Grim Tutor and alternate art Teferi, Master of Time, this Collector Booster really lacks some other sought-after cards. So you’re probably better off buying another product, unless you really want to try your luck at oppening Ugin.

However, Ikoria Collector Booster has something really special. It contains MTG Godzilla cards! These cards are alternate art cards of some of the strongest creatures from Ikoria – but they have the official Godzilla artwork and art styles on them.

So if yo were wondering where to find Godzilla cards, this is the box you’ve been looking for. Additionally, you can find everything about MTG Godzilla cards here.

Theros Beyond Death Collector Booster Box might be the worst of the bunch. The only high points are the five God card, which are all very cool-looking, but only some of them are truly valuable currently.

There are three borderless planeswalkers, and all of them are relatively cheap. All Boosters also contain two Nyx full art basic lands, which look pretty special, for sure.

However, if you don’t mind some lower value, and really like Greek mythology in MTG, you can still go ahead and grab one box, as the cards are quite flavorful if nothing else.

Throne of Eldraine introduced the Collector Booster for the very first time. All of the adventure creatures got a showcase treatment. This art style is’s still one of the better ones we got, as it really captures the fairy-tale theme.

Of course, there are also extended art cards and borderless planeswalkers, the most notable being the best planeswalker of all times – Oko, Thief of Crowns.

While Throne of Eldraine Collector Booster Box doesn’t contain the most valuable cards overall, it still has many very playable Commander cards, as you have stuff like The Great Henge and Castle Locthwain with extended art.

Here are some questions that new players might have about this product. If you have a question that we didn’t answer, leave a comment below.

What is a Collector Booster?

A Collector’s Booster is a relatively new type of MTG Booster. It was first introduced in October 2019, with Throne of Eldraine. In contains more rares, more foils and more alternate art cards than any other booster.

How Many Packs are in a Collector Booster Box?

Usually, it’s cheaper to buy a Booster Box, than 12 separate Boosters. However, you should still check the prices to make sure, as they might vary from set to set.

Which is the Best Collector Booster Box to Buy?

This is a hard question to answer, because different players have different tastes. However, taking uniqueness, value and number of exciting cards into account, our three favorite ones are:

Ikoria has the Godzilla cards which are very unique, and can only be found there. Zendikar Rising has guaranteed Expeditions, and they are all at least playable. It’s always great when you’re guaranteed to get at least something good when opening boosters.

Finally, there’s Commander Legends, which is the perfect Collector Booster Box for any Commander player.

Are Collector Boosters Worth Buying?

That depends. For some players Collector Boosters are worth it, for others – not so much. In general, you shouldn’t buy them, if you:

On the other hand you Collector Boosters are worth it, if you:

Anyways, that’s it for today. If you have any questions or comments feel free to leave a comment below. Until next time, have fun and may your Collector Boosters contain that one card you really want.