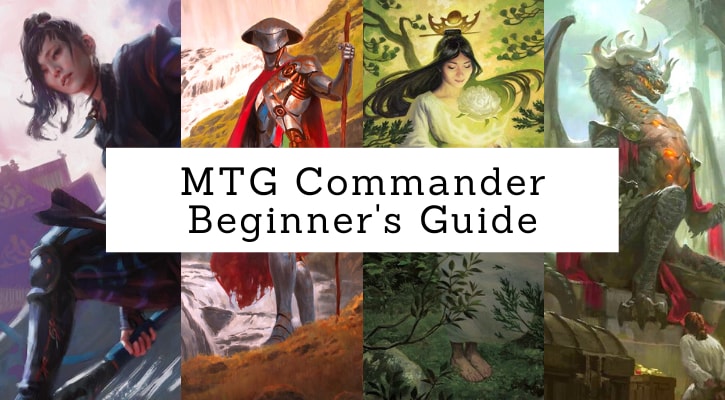 Are you a new Magic player wanting to get into EDH? Maybe you’ve been playing Magic Arena and want to try out this 100-card format that everyone keeps talking about. Whatever your reason, welcome to MTG Commander Beginner’s Guide. This is a brief introduction to Magic’s most popular format: Commander.

Where Did Commander Come From?

First things first, let’s talk about what is Commander and how it started.

In 1994, Wizards of the Coast released a set called Legends. This set contained the first Legendary Creatures, that were simply called Summon Legends at the time (see Angus Mackenzie).

The creation of this card type led to a casual format called Elder Dragon Highlander. Eventually shortened to EDH, this format slowly gained popularity among players who were sick of the monotony of sixty-card competitive formats.

Originally, your EDH deck could only be led by one of five legends. These were the Elder Dragons:

This rule, along with a rule inspired by the 1986 film, Highlander, (“There can only be one.”) were the building blocks for what would eventually become the format we know today as Commander.

What Makes Commander Different From Other Formats?

Aside from casual kitchen table Magic, every format has special rules. Most of them include a minimum deck size (usually of 40 or 60 cards) and allow for a 15-card side board of cards that can be switched into your deck between games in a best-of-three match.

Commonly, a 75-card deck/sideboard can only play four of any given card, except for basic lands. Also, most other formats pitch two players against each other to see who can reduce the other’s twenty-point life total to zero the fastest.

Commander is interesting because of how it differs from other formats in all of these situations. Every Commander deck must have exactly 100 cards (ninety-nine main deck cards and one commander). There is no sideboard. A deck may only contain a single copy of any card, except basic lands and cards that otherwise say you are allowed any number of them (e.g., Shadowborn Apostle).

Furthermore, Commander is a multiplayer format, typically played between four players. It is, however, possible to play with a greater or fewer number. Each player starts at forty life, and must reduce each other players’ life total to zero in order to win.

Additionally, if a single commander deals 21 or more points of combat damage to any one player, that player loses. This rule comes from the original EDH format, when players could only use the Elder Dragons as Commanders. Since each dragon had seven power, three hits from one of them was enough to defeat an opponent.

Are you still following? Great. Let’s move on.

Who Can Be My Commander?

Each legendary creature has a “color identity”. This is a fancy phrase that, put simply, tells you what colors make up the card. For example, Atraxa, Praetors’ Voice is green, white, blue, and black.

However, a legendary creature’s color identity includes all colors found both in their casting cost as well as in their text box. This means that commanders like Golos, Tireless Pilgrim are allowed to play cards of any color, despite having only generic or ‘colorless’ mana requirements in their casting cost.

The reason this is important is that there is one final deckbuilding rule for Commander decks. In addition to restricting decks to one hundred card singleton, Commander decks may only include cards that fit within their commander’s color identity. For example, a deck led by the previously mentioned Atraxa, Praetors’ Voice may have green, white, blue, black, and colorless cards. It may even include cards that have any combination of those colors. It may not, however, have any red cards or cards with red in their casting cost or text box.

How Does a Game of Commander Play Out?

So let’s say you got your three friends together for a game of Commander. The four of you meticulously crafted your one hundred card decks around a legendary creature and are ready for a fun game. How do you start?

First, everyone puts their commanders in a special zone on the game board. This zone is appropriately called the command zone. Then, each player shuffles their remaining cards and draws seven. If anyone is unhappy with the seven cards that they drew, they can take what’s called a mulligan to try to get a better starting hand. In Commander, the official rules say to use the London Mulligan to decide your opening hand.

Once you have shuffled your decks and resolved your mulligans, you choose who goes first. Often, players roll a die to decide this. Whoever rolls the highest goes first. That player draws a card (unlike in sixty card formats) and plays one land per turn. They can tap that land for mana, which they may then spend on casting their spells. Play continues in a clockwise direction until only one player remains.

In addition to everything we’ve already talked about, Commander has one unwritten rule. Sometimes called “Rule Zero”, this rule states that a play group can change whatever rule they want in order to have the best possible play experience.

The practical applications for this rule are far-reaching. Below is a short list of rules that players could change with Rule Zero:

Due to the fact that Commander is a multiplayer format, there is a political aspect to the game that is absent in two-player formats. Rule Zero compliments this idea by encouraging players to gain favor from each other. In other words, if one player violates Rule Zero in a way that negatively impacts everyone else, the other three players are likely to band together to punish that one player.

Additionally, players are able to establish deals with each other throughout the game. Such deals balance the game by offering players who are behind an opportunity to catch up and pulling players who are ahead back in line with the rest of the table.

There are plenty more details to learn about the Commander format, but they wouldn’t all fit in this article. So in this section, you’ll find various articles and resources, which will help you learn more about Commander.

If you’re just starting out, it can be hard to build your first Commander deck. That’s why you might want to get one of the pre-built Commander decks. These are beginner’s friendly, ready to play 100-card decks. You can find a list of all Commander precons here.

However, if you want to build it yourself, you can find out how to build your first Commander deck here. You’ll want to include the most powerful cards, so make sure that you check the article about Commander staples.

How to Choose Your Commander?

Don’t know which Commander to pick? Here are some articles that talk about the best Commanders, based on different criteria:

Do you want to build a mono-colored Commander deck? That’s possible too, and we have five articles, one for each color, that can help you:

There are also some accessories that you might want. Of course, the only thing you actually need to play Commander is your 100-card deck, but some add-ons can make the experience more enjoyable.

First and foremost, you’ll need sleeves. They make your cards easier to shuffle and protect them from damage. You can take a look at our other choices for best MTG card sleeves.

You’ll also want a deck box to keep all your cards in. There are a ton of different deck boxes, so it can be hard to pick the right one. Here’s an overview of the best deck boxes for Commander.

Finally, you might want to pick some great MTG dice. You can never have too many of them. Don’t have tokens? You can use dice. You can learn more about what a new player needs to buy for Commander here.

Last but, not least, I wanted to shout out two amazing resources.

First one is EDH Rec, a website dedicated to all things Commander. There you’ll find most popular cards by sets, most synergistic cards for specific commanders, and plenty more.

Second one is Scryfall, which is the best search engine for Magic cards. Their advanced search is easy to grasp, and you can easily find the cards you need.

The only thing left for you to learn how to play Commander is to actually try it out. As you build your first decks and play against others, you will begin to understand the various dynamics of this complex game.

Don’t be afraid to try new things. If you don’t like it at first, give it another shot. One of the best parts about Commander is the way that it can bend and change to be whatever you want.

You can find lots of other great articles from Card Game Base here. And if you would like to find me on social media, I’m on Instagram and Twitter.

Hopefully this Commander Beginner’s Guide answered your questions. If you need more answers about it, feel free to leave a comment below. Have fun playing this amazing format!