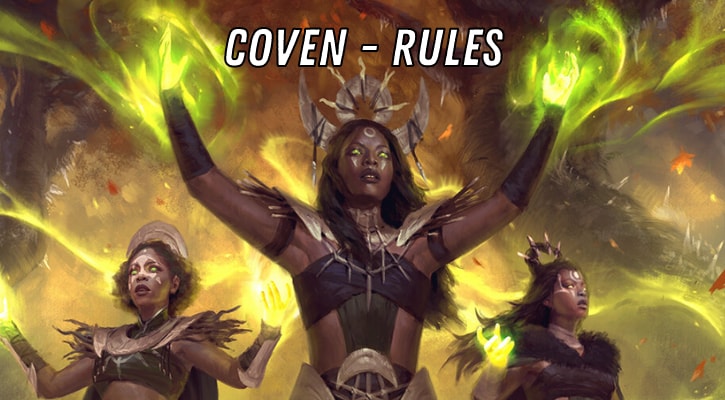 Coven is a new MTG ability word introduced with Innistrad: Midnight Hunt. In this article, we’ll talk about everything you need to know about it:

This way, you’ll be ready to take advantage of the new coven cards.

How Does Coven Work?

Coven is an ability word. (This means it doesn’t do something specific by itself, but groups similar cards together.)

Cards with coven become better if you control three or more creatures with different powers.

The bonus effects for coven vary from card to card, so it’s probably best that we take a look at an example or two.

Here’s Dawnhart Wardens, which has the Coven ability word.

So you’ll always get a 3/3 vigilance for three mana. This is perfectly fine for draft. However, if you have three or more creatures with different powers, your creatures will get +1/+0 at the beginning of your combat.

The ability doesn’t have to be triggered. You can also have an activated ability. For example, Sungold Sentinel has one.

With this two drop, you can pay two mana, and choose a color to give it hexproof from that color. It also can’t be blocked by creatures of that color for a turn. Pretty good, right? However, since Sentinel has coven, you can only activate that ability, if you control three or more creatures with different powers. Of course, Sentinel can count as one of those creatures.

What happens if one of the three creatures dies?

Well, it depends. If you activate an activated ability (like the one of Sungold Sentinel), and your opponent kills one of your creatures in response, the ability still happens, as it is already on the stack.

However, the triggered abilities check the number of different powered creatures twice. Once when the effect triggers, and once at the resolution.

For example, your opponent has Dawnhart Wardens in play. At the beginning of their combat, the ability goes on the stack, since they also control a 1/1 and a 3/3. You destroy their 1/1 in response. When the Wardens’ effect tries to resolve, it checks again how many creatures with different power are there. Since there are only two, they don’t get the +1/+0 bonus.

Since coven is a pretty straightforward mechanic, it doesn’t pose many questions to answer. However, if there’s something that’s not quite clear to you, let us know in the comments below, and we’ll get back to you as fast as we can.

Coven is a noun, which means a group or a meeting of witches.

So apparently the flavor here is that you need to have a group (at least three) of weird (different powered) creatures.

There aren’t many weird interactions with coven. However, there are a couple of interesting tidbits.

This is a particularly interesting pump spell, and you have to think for a bit before playing it.

Effects happen in order as they are written on the card. So, first the creature gets +2/+2, and then you potentially get to draw a card. That means if you have two 1/1s and a 2/2, you can pump a 1/1 to draw a card.

If you really like the mechanic (and +1/+1 counters too), there’s also a commander for you.

Leinore is the face of Coven Counters Commander precon. (You can get the deck on Amazon.) As with other coven cards, she rewards you for having three or more creatures with different powers.

You can find more about the Midnight Hunt Commander decks here.

That’s all about the coven mechanic. Hopefully, you now know how it works, and you’ll be able to use it to your advantage.

If you want to know more about Midnight Hunt, you can browse through Midnight Hunt spoilers. Also, don’t forget to check if you used all MTG Arena codes. After the Midnight Hunt release, you’ll be able to claim 3 free boosters of that set as well.

Until next time, have fun and may you control three creatures with different powers when you need them most.