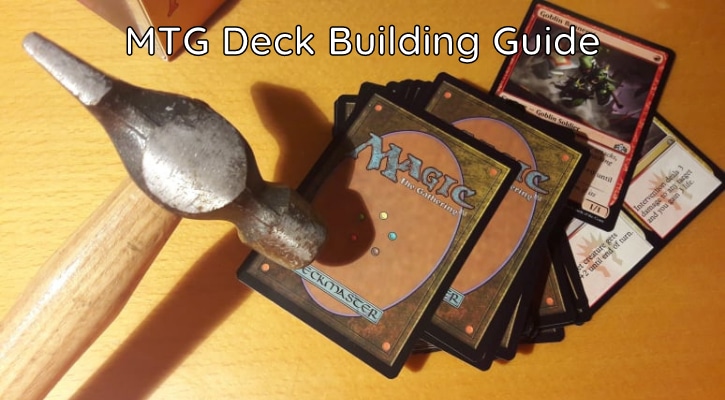 Sometimes you think you have a good Magic the Gathering deck, but you just can’t seem to win with it… Do you want to become better at MTG deck building and win more? This article will help you do just that, with 8 easy deck building tips.

Remember, if any of those steps aren’t fun for you, feel free to ignore them. The main purpose of Magic the Gathering is to have fun. But if you also want to win more, this rules will help you to do just that.

Note: This article mostly focuses on 60 card decks. Some stuff might be applicable to Commander, but if you want more specifics about that format, check these two articles:

1. Have a Deck Building Plan

Every good deck has a plan that can be described easily. Try to answer the question: “How is my deck trying to win?”

So what do good plans have in common? They all focus on a single theme, and so should yours. All the cards in your deck should work towards it.

Of course, you can always have a theme and a couple of sub-themes. However, be careful that they can all work together.

2. Play the Correct Amount of Cards

You can play up to four copies of a single card in your deck. But how should you decide between playing two or three copies. Here are some general guidelines which should help you with that.

These cards should be your most powerful cards, which you want to draw every game. You don’t mind drawing multiples of them.

They might be cards that you always want to see in your starting hand, such as Llanowar Elves or Fervent Champion. On the other hand, these can be corner-pieces of your deck, let’s say Showdown of the Skalds or Goldspan Dragon.

You want to draw the card every game, but you don’t want to get multiples of them. Think of legendary creatures – the first copy is often powerful, but the second one does absolutely nothing while the first is still alive. The same goes for Planeswalkers and other legendary permanents. That’s why many green decks these days cap at three copies of The Great Henge.

Two is the most mediocre number in MTG deck building. It’s often used for a card that accompanies other. For instance, let’s say you are playing Black deck which wants to play 6 copies of Hearthless Act. You can’t do that, so you play 4 of them and two copies of another removal spell, like Bloodchief’s Thirst.

Two copies can also be used when you’re not entirely sure which of the similar effects will be better. Let’s say you want to play four cheap removal spells in your deck. Both Hearthless Act and Bloodchief’s Thirst have their advantages in different situations. You can decide to simply play two copies of each card.

If you play a card that tutors, such as Grim Tutor you want some silver-bullets. These are cards very good in specific situations, for example Naturalize. You want exactly one in your deck, which you can acquire with Acquisition when you need it.

Well, this one is pretty self-explanatory. If every one of your cards is good on its own, your deck just can’t be that bad. Building around synergies can be fun, but there are obvious problems with your three card combo of weak cards.

Yes, Naru Meha, Master Wizard, Ghitu Journeymage and Illusionist’s Stratagem can win you the game, but what happens when your opponent has a removal spell, or you don’t draw all three of them? You’re probably going to lose, since you’re playing mediocre cards, that don’t do that much by themselves.

4. Do NOT Play Extra Cards

Most formats (Commander excluded) allow you to play X or more cards in your deck. But beware, this is a trap!

It’s impossible to build a deck of equally powerful cards. Usually there are some cards that are the best in your deck. So you want to draw them each game because you’ll win with them. Each card you add to your deck after the minimal requirement will decrease your chance of drawing that powerful card.

So if you want to build a better MTG deck, you have to play the minimal number of cards you’re allowed to.

How Many Cards in MTG Deck?

Just for a quick reminder, how many cards should you play in each format:

As with every other rule in Magic, there are some cards that can somehow break it. For example, if you’re playing Battle of Wits, you’ll want to go over the minimum deck size. The same is true if you want to use Yorion, the Sky Nomad as a companion. You can find more information about maximum deck size in MTG here.

The mana curve is essentially a curve, which you get when you make a graph of how many cards of a certain mana cost there are in a deck. Let’s take a look at some average examples.

As we see, there are a lot of one and two drops. After that, there are some three and four drops and the curve ends at five.

Therefore, when building an aggro deck, you should always pay attention that your deck has a lot of one and two drops. Also, don’t play 6+ drops, but you might get to squeeze a powerful five drop or two in there.

Curve of a midrange decks is – as expected – heavier on the late game than the one we saw before. Importantly, that doesn’t mean that you play a ton of four and five costing cards. You need enough early plays to pressure control and keep up with aggro decks.

Newer players often think of control as a slower deck. Yes, control deck wins slowly, but that doesn’t mean that it plays slow cards. As you can see, it’s quite the opposite, as control decks play a lot of cheap interaction.

So don’t build your control decks without it. Otherwise, you won’t be able to compete with aggressive and midrange decks.

There are three major things you should get in order:

There’s nothing worse than staring at your hand full of spells you can’t cast. Therefore, you should always play enough lands. The amount of lands depends on the type of deck you play.

In general, you should follow this numbers for 60-card decks:

For 100-card Commander decks, it’s usually good to start with around 38 lands. You can always adjust that number depending on how many ramp spells you’re playing.

Let’s say you’re playing a red-white deck. You shouldn’t just play 4 dual lands, 10 Mountains, 10 Plains and call it a day. You should play more Mountains than Plains, if:

You might be wondering if there are some exact numbers you can apply. Well, you’re in luck. There’s a great article by Frank Karsten on that topic.

You’ll often hear players complain how they lost when they drew 5 lands in a row. That’s why utility lands are great. These are lands which do something besides just produce mana.

Some great examples are:

When you’re working on your MTG deck building, you probably won’t remember every single card in existence. But sometimes you need to know if there is a certain effect available in your colors. Or if there is another playable one drop for your aggro deck. That’s where Scryfall can help you.

What Google is for websites – Scryfall is for Magic the Gathering cards. Their advanced search is great.

You can search based on any criteria you can imagine – such as:

When you finish your deck building – it might not work yet. Don’t give up immediately. No one builds a perfect deck from a scratch. You should rather try some changes and experiment more.

However, you shouldn’t change everything at once because that way you won’t know which change is causing your deck to behave differently.

Sometimes it can be hard to figure out what adjustments you should make. Ask your friends for feedback. They might see something you overlooked.

We hope that we helped you figure out how to build better MTG decks. If you have any questions, feel free to leave a comment below. If you’re planning on building a new deck, you might want to get some new sleeves or a deck box. You can find the best MTG sleeves here, and best deck boxes here.

Have you just started with Magic the Gathering? You might want to take a look at best buys for beginners, including a way to get a free sample deck.