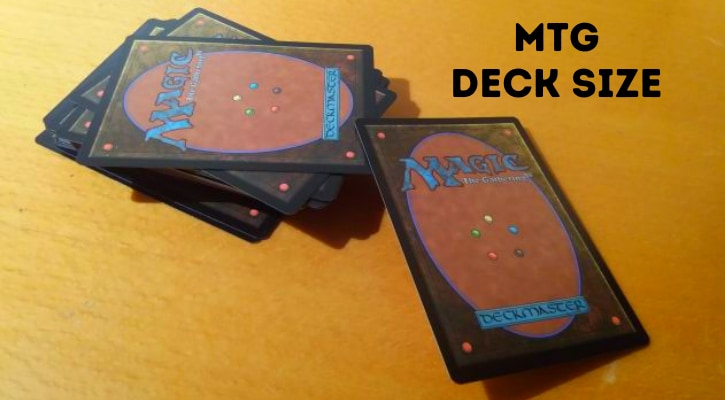 In this article, we’ll explain everything you need to know about MTG deck size. How many cards are in a Magic the Gathering deck? Should you play more than 60 cards? All this and more follows.

How many cards you can play in Magic deck depends on the format. There are many Magic formats, but mostly the rule is 40 for Limited (Draft and Sealed), 60 for Constructed. The one exception is Commander, which uses 100 cards. You can find the rules for specific formats in the table below.

Is There Really No Maximum Deck Size in MTG?

There are some formats that have a maximum deck size, for example Commander you have to play exactly 100 cards, and no more. In most other formats, there is no maximum deck size. However, you must be able to sufficiently shuffle your deck in a reasonable amount of time.

So this means that you probably can’t play a deck with a 1,000 cards.

Let’s quickly mention Two-Headed Giant, a format where 2 players play against other two players. The deck size is the same as in their respective format. So in Two-Headed Giant Sealed, you’ll both have at least 40 cards in your deck.

Should You Play More Than 60* Cards in Your Deck?

In short – NO. A bit longer explanation is – no, unless you’re playing Battle of Wits in your deck, or have Yorion, Sky Nomad as your companion.

The longer explanation is still quite simple. Some cards in your deck are just better than others. Let’s say that the best card in your deck is a powerful planeswalker like Sorin the Mirthless. You play four copies of it, and you really want to play it on turn 4.

By the fourth turn, you usually draw 10-11 cards. For our calculation, we’ll propose you drew 10 of them, but the same principle applies for any other number. If you’re playing 60 cards, you have 52.8% of drawing Sorin by turn 4.

Now if you have only one extra card, and you’re playing a 61-card deck, your chances fall down to 52.1%. Yeah, it’s only 0.7%, but it is worse. You shouldn’t make your deck worse, just because you don’t know which card to remove. Take a look at how your chances of drawing your best card go down when you add more cards to your deck:

Now, if the question is – can I play more than 60 cards – the answer would be: Yes, but you shouldn’t do it if you really want to win. If you just want to have fun and don’t care about losing, feel free to play as many as you like. Just not in Commander and Brawl, since those formats require an exact number of cards.

If you’re looking for more information about Magic, so you’ll get better and win more, we have some good reads for you:

That’s all about MTG deck size. Until next time, have fun and don’t play too many cards in your decks.