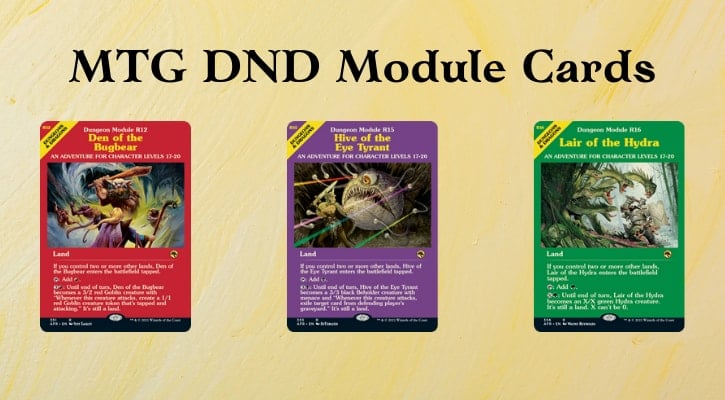 In this article you’ll find all the information about MTG DND Module cards, including the full list of all nine cards. We’ll also talk about where you can get them and share some interesting trivia about these cards.

There are nine total land cards that got the classic Module treatment. There’s seven rares, one uncommon and one common. You can find all of them here:

Where To Get MTG DND Module Cards?

You might get cards with the classic Module treatment in all three major types of Adventures in the Forgotten Realms Boosters. You can usually get these in booster boxes from your local game store, or from Amazon:

Note that these aren’t guaranteed. Draft boosters have the lowest chance of getting a DND module card. It’s slightly higher in Set Boosters. Your most likely to get a module card from the Collector booster, which has five slots, where you could get one.

Here’s some interesting trivia about the module Magic cards.

Why Are They Called Modules?

While these cards might seem weird, they are based on the old D&D adventures (published between the late seventies through the nineties). These adventures were called modules.

Wizards of the Coast first wanted to make them look like Magic cards first, and modules second. However, they didn’t quite like the compromise, so they just decided to go full on module styling. This way we’ve got some of the most unique looking Magic cards in existence.

Wizards also paid much attention to the artists. So all module card feature all-new artwork from some of the best-known classic Dungeons & Dragons artists. The nine artists that worked on these cards are:

All artists the artists were quite happy to work on the first D&D themed Magic set, which really shows on the amazing artworks we’ve got.

What Does “An adventure for character levels” Means?

For the Magic’s gameplay “an adventure for character levels” means absolutely nothing. This is yet another nod to the DND modules and won’t affect your games in any way. Just treat it as a flavor text.

That’s all about MTG DND Module cards. If you have any questions or opinions about them, leave a comment below.