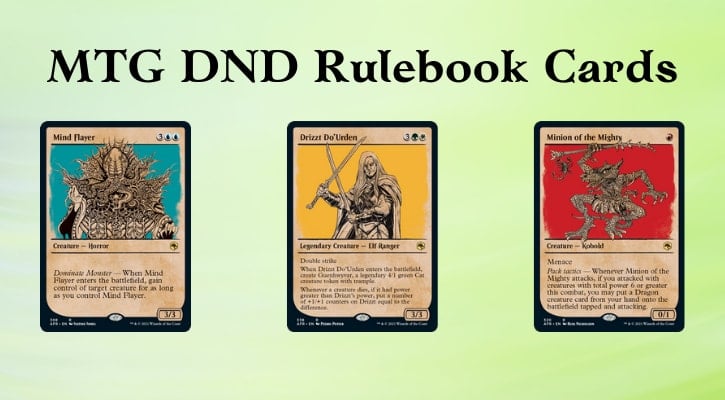 In this article, you’ll get all the information about MTG DND Rulebook cards. That’s including the full list of all fifty-one cards. We’ll explore where you can get them and share some interesting facts about them.

With that said, let’s get right to it and explore the full list.

51 cards that got the DND Rulebook treatment. Here’s the rarity breakdown:

You can find all of them here, sorted by color:

Where To Get MTG DND Rulebook Cards?

You might get cards with the D&D Rulebook treatment in all three major types of Adventures in the Forgotten Realms Boosters. You can usually get these in booster boxes from your local game store, or from Amazon:

However, these aren’t guaranteed. Out of these three, Draft boosters have the lowest chance of getting a DND Rulebook card. The odds improve slightly with Set Boosters. Your most likely to get a Rulebook card from the Collector booster, which has five slots, where you could get one.

Here’s some interesting trivia about the Rulebook Magic cards.

Why Are These Called Rulebook Cards?

Original Dungeons & Dragons books, or manuals (also called Rulebooks – hence the name), contained various black-and-white art styles. Wizards tried to emulate those, so each of the 51 cards that got this treatment has an alternate art in that classic style.

However, the cards would look really out of place, if they’d just feature the black-and-white pen-and-ink artwork. So the design team decided to add the parchment background. With the single character focus, the art box seemed rather bland. That’s why they added the color washed background in the art box.

As you might’ve noticed, the color was based on the card’s color identity. Red cards got red background, green ones got green and so on. Multicolored cards ended up with a yellow color wash.

What’s the deal with the fifty-first card? It’s Mimic! While it’s not technically a creature, it can become a 3/3 Shapeshifter.

Anyways, that’s all about MTG DND Rulebook cards. If you have any questions about them, leave a comment below, and we’ll get back to you as fast as we possibly can.

If you want to know more about Adventures in the Forgotten Realms (Magic’s first D&D themed set), check out the following articles:

There’s also the other Forgotten Realms showcase style that you can explore, so-called DND Module cards.