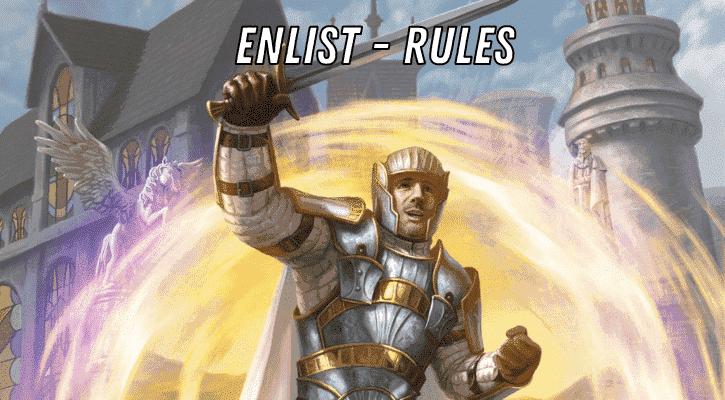 Enlist is a new MTG keyword introduced with Dominaria United. In this article, we’ll talk about everything you need to know about it, for example:

How Does Enlist Work?

Enlist is a keyword that only appears on creatures. Whenever a creature with enlist attacks, you may tap a nonatacking creature without summoning sickness you control. If you do, you add its power to the attacking creature, that enlisted it – until the end of turn.

So, let’s say you have creatures A and B. Creature A has enlist. This means that you can:

Now, while this might seem like a lot of text, it’s actually quite simple in practice. Let’s take a look at an example.

Here’s Guardian of New Benalia. It’s a rare, so it has some additional abilities, but for now, we’ll only focus on the enlist keyword.

Let’s say you have it and a 3/3 creature, like Centaur Courser in play. You controlled Courser from your previous turn, so it isn’t summoning sick.

You can attack with Guardian, tap Courser, and Guardian of New Benalia becomes a 5/2, since Courser’s power is 3. (2+3=5)

Here are some commonly asked questions about enlist. If you have a question, that we didn’t answer, leave a comment below, and we’ll get back to you, as fast as we can.

Can I tap an attacking creature that has vigilance for enlist?

No, you can only tap creatures that aren’t attacking for enlist.

Why can’t I use a creature for enlist?

If you’re playing on Arena and you couldn’t tap a creature for enlist, it’s probably because it has summoning sickness.

So, what’s the flavor with enlist? Well, not everyone is great at getting into combat, but everyone is able to enlist into the army, and perhaps help in some other way. So, creature with enlist can get others to help them without endangering them.

There aren’t many weird interactions with enlist. However, here are some things to keep in mind.

Removing the Creature in Response

What happens if one of the creatures in removed in response to the ability? Well, if the creature with enlist is destroyed, it’s pretty straightforward. That one dies, and the one that was tapped is still tapped.

However, if the tapped creature is destroyed, then the creature with enlist still gets its power, from when it was still in play.

How does enlist work in Limited? Well, if you want to make the most out of your enlist cards, you’ll want to be aggressive. This keyword doesn’t do anything on defense.

Furthermore, you might want to include combat tricks and/or evasion into your deck. Your opponent is incentivized to block your big creature, and you can really punish them with a well-timed combat trick. Furthermore, the evasion is also useful, if you can get a big creature through, it might be game over.

Creatures with big power and low toughness also get a bit better, as you can use them in combat without exposing them to blocks.

Anyway, that’s all about the MTG enlist keyword. Hopefully, you now know how it works, and you’ll be able to use it to get some wins. If you want to try your luck and open some boosters that might have cards with enlist, you can get a Dominaria United Set booster box.

If you want to read more Magic articles, you can check the following ones:

Until next time, have fun and may your creatures always enlist successfully.