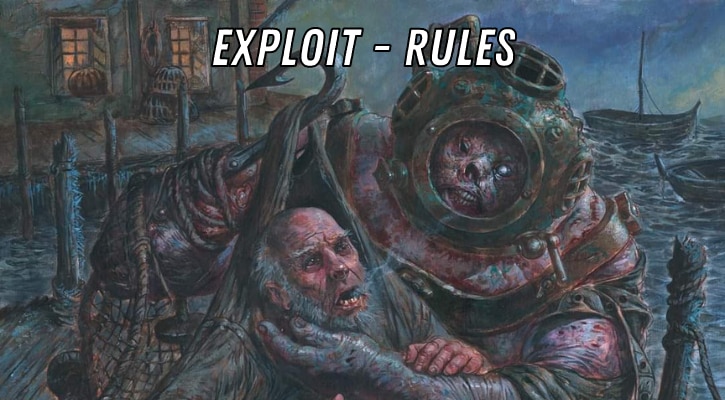 Exploit is an MTG keyword ability. It was first introduced with Dragons of Tarkir, and has since returned in Innistrad: Crimson Vow. In this article, we’ll talk about everything you need to know about this keyword, including:

How Does Exploit Work?

Exploit only appears on creatures. When your creature with exploit enters the battlefield, you may sacrifice a creature. If you do, you get a benefit of some sorts.

Different exploit creatures, give you different benefits, but the main thing is that you have to sacrifice a creature in order to get it.

Here’s Mindleech Ghoul, as an example.

It’s a 2/2 for two mana, with exploit. When it enters the battlefield, you may sacrifice a creature. If you do, each opponent will have to exile a card from their hand.

Quite simple, right? Here’s another example.

Stitched Assistant is a three mana 3/2, and it also has exploit.

However, it gives you a completely different benefit. You get to scry 1, and draw a card. That can be some real value, if you’re sacrificing a useless creature, or one that was enchanted with Pacifism.

Can you sacrifice a creature to its own exploit ability?

Yes, you can! That’s a very important aspect of creatures with exploit. It basically means that you can always get their effect when you play them if you really want to, even if you have no other creatures in play.

Must I sacrifice a creature, when I play a creature with exploit?

No, you don’t have to. The exploit reminder text reads; “Whenever this creature enters the battlefield, you may sacrifice a creature.”

So, if you don’t want to sacrifice a creature for whatever reason (usually because the effect has lower value than your worst creature), you don’t have to.

Can I respond to the opponent’s exploit trigger?

Yes, you can. But it’s important to which ability you respond. Why? Because most of the exploit creatures have two triggered abilities:

So, what you might want to do is to respond to the first of the two triggered abilities. You can kill the creature with exploit before the first trigger resolves. In that case you’re opponent can still sacrifice a creature, but they won’t get the benefit, since the exploit creature will no longer be on the battlefield for the second ability to trigger.

This is something you might want to do, if the exploit benefit is a really good one. Maybe if your opponent plays something like Sidisi, Undead Vizier.

To exploit means “to make full use of and derive benefit from a resource”. Well, that’s basically what the exploit does. Creatures with exploit get the full use of your weakest creatures.

In this section we’ll talk about a couple of weird interactions with exploit. If there’s something interesting that came up when you were playing with an exploit creature, let us know in the comments below.

Most exploit creatures have the ability, whenever this creature exploits a creature, you get a benefit. However, that’s not always the case, as can be seen with this uncommon.

Skull Skaab doesn’t mention itself in its rules box. This means, that even if its ability isn’t that good when it enters the battlefield, it improves all of your other exploit cards. They’ll also make a 2/2 Zombie, whenever they exploit a creature — in addition to their other benefits.

That seems pretty good in a dedicated exploit deck, especially in a Crimson Vow draft.

There’s a special strategy in MTG, called aristocrats. It usually consists of sacrificing small creatures for all kinds of value. Exploit creatures fit perfectly in that shell.

If you have a card that rewards you for sacrificing stuff, like Mayhem Devil, the exploit creatures worn nicely with them.

That’s all about exploit rules. Hopefully, you now know how it works, and you’ll be able to use it to your advantage. If there’s a question you have that we didn’t answer, leave us a comment below, and we’ll get back to you as fast as we can.

Do you want to try to draft the exploit archetype? In that case you might want to get yourself a Crimson Vow Draft booster Box from Amazon, and organize a draft for your play group.

If you want to know more about the Crimson Vow mechanics, check the following articles:

Until next time, have fun and exploit this mechanic to the fullest.