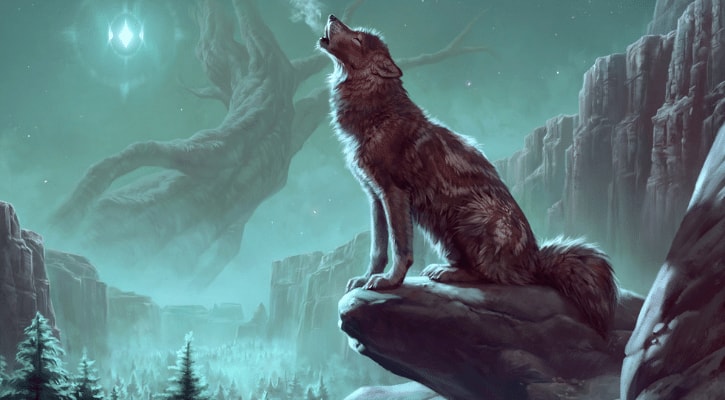 Foretell is a new MTG mechanic introduced with Kaldheim. In this article we’ll talk about everything you need to know about it:

This way, you’ll be able to take advantage of this skill-testing mechanic to its fullest.

How Does Foretell Work?

Foretell is a keyword ability.

If a card in your hand has foretold, you can pay 2 mana of any color to exile it face down. You can cast in on a later turn for its forecast cost.

You can also just cast it for its regular mana cost, if that suits you better. So essentially, foretell gives you an option to pay for a card in installments.

Let’s take Alrund’s Epiphany – a new version of Time Walk as an example.

First things first, you can always just cast it for its regular mana cost. So you pay seven mana, and you get two birds and an extra turn.

On the other hand you can – on your turn pay two mana and exile Alrund’s Epiphany face down. (If you’re playing in paper, you announce that you’re foretelling.) Then on any of your next turns, you can cast Epiphany from exile, for its foretell cost – so for six mana.

This means that by spending two mana earlier, you got to save one mana later on, and potentially got to cast Alrund’s Epiphany one turn earlier, which can be quite powerful.

While this mechanic is pretty straightforward, it can still leave you wondering about some specifics. We’ll try and answer most of the questions you might have here. However, if you have additional questions about foretell, leave a comment below, and we’ll try to answer it as quickly as possible.

Can you cast foretell card in the same turn you exiled it?

No, you can’t. The rules work in a way that if you pay the two mana and exile it face down, you have to wait until the next turn to cast it.

So if you can’t cast your foretell card on Arena, the most likely reason is that you exiled it on the same turn. Keep in mind that you can always just cast it for its regular mana cost.

Can I cast a foretell card on my opponent’s turn?

The wording “Cast it on a later turn for its foretell cost.” might confuse you. This just means that you can’t cast it on the same turn, that you exiled it from your hand.

Regular casting restrictions still apply. So you can cast instants and cards with flash on your opponent’s turn. You can only cast creatures, sorceries, etc. on your own turn.

This means you can pay two and exile Behold the Multiverse on your turn, and then cast it for two mana on your opponent’s turn.

Can I exile a foretell card on my opponent’s turn?

No. You can only exile foretell cards by paying two mana during your turn.

What happens to a foretell card after I cast it from exile?

It goes on the stack. When it resolves, it comes into play, if it’s a permanent. If it’s an instant or a sorcery, it goes to the graveyard, unless stated otherwise.

You don’t get to just keep casting the same card from exile over and over again.

If my foretell card gets exiled in another way, can I just cast it?

No. If you’re opponent would cast Path to Exile and get rid of your creature with foretell, you couldn’t just cast it back for its foretell cost.

You have to pay two mana and exile the foretell card from your hand in order to be able to cast it from exile.

When do “whenever you foretell a card” effects trigger?

Some cards can have a triggered ability, which triggers whenever you foretell a card. (Like Dream Devourer, which gets +2/+0.) That happens whenever you pay the initial 2 generic mana cost.

Can you use forecast ability at instant speed?

Yes. You can pay two mana and exile a card with foretell from your hand at instant speed – but only during your turn.

Before we wrap with the rules’ aspect, here are a couple of things to note, when you’re playing in paper:

You must keep your exiled foretell cards in order. While your opponents don’t know which exact card is turned face down, they should be able to know which card you foretold first, second, and so on.

If you still have any foretold cards in exile at the end of the game, you have to reveal them to your opponent. This is done, so they know you weren’t just making stuff up and tried to bluff them or gain an unfair advantage.

The flavor of this mechanic is pretty straightforward. There were quite some prophecies in the Norse mythology. So something similar is happening here.

Things are being foretold. Your opponents don’t know exactly what’s coming – but something certainly is.

Here are some of the more notable foretell interactions. If you know about some cool ones, that we didn’t mention, show your Magic knowledge in the comments below.

Get Ranar’s Deck on Amazon

Ranar allows you to exile the first foretell card in a turn for free. It further synergizes with foretell cards by making 1/1 flying Spirit tokens, whenever you exile a card from your hand.

Ranar is available in the Kaldheim Commander decks, and as such isn’t Standard legal. However, it will probably be a key card in a dedicated foretell Commander deck. You can get Ranar in the Phantom Premonition deck from Amazon.

Alrund, God of the Cosmos

Alrund is another Kaldheim card, but it’s from the regular set, so you can build a Standard deck around it.

Alrund can get really big – it counts not only your foretell cards in exile, but cards in your hand as well. Plus it’s a super cool design all around.

Foretell cards usually cost less, when you cast them for their foretell cost. But that’s just one benefit – by exiling the cards from your hand, you also get around discard spells.

So if your opponent is playing Agonizing Remorse, you can try and exile your best foretell cards, before they manage to get rid of it. This way, you’ll still be able to cast it later.

One interesting foretell interaction is with Eldrazi Processors. While this isn’t currently applicable to Standard, you might still get someone in a casual game.

Eldrazi processors use cards that the opponent have in the exile to power themselves up. They do so by moving those cards from exile to the graveyard. This would effectively discard a card that has been foretold, and the player wouldn’t be able to use it – which is a pretty big hit, considering they already spent two mana on the card.

So if you want to try this interaction against your friend, who’s focusing on a foretell mechanic you can also use some of the following Eldrazi creatures:

That’s all about the foretell mechanic. Hopefully, you learned how it works, and you’ll be able to use this to your advantage.

If you want to know more about Kaldheim, you can browse the Kaldheim spoilers page. Also, don’t forget to check if you used all MTG Arena codes here – and once Kaldheim releases, you’ll be able to claim 3 free Kaldheim boosters as well.

Until next time, have fun and may your future be brighter then even the most optimistic fortune teller would foretell.