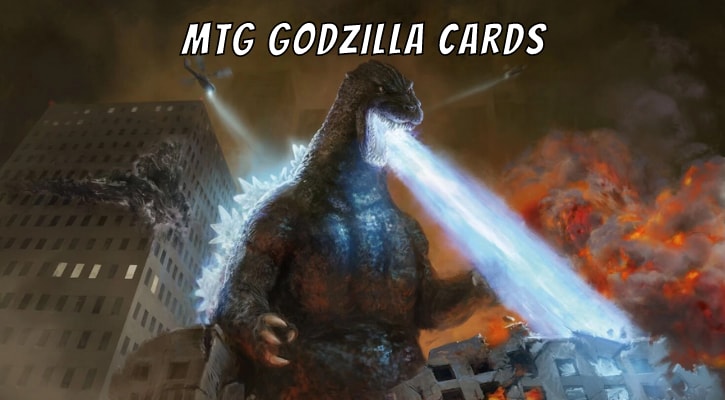 Today we’ll explain everything there is to know about MTG Godzilla cards. We’ll answer the following questions:

What are MTG Godzilla Cards?

Wizards of the Coast (company that makes Magic cards) partnered with Toho Corporation, who owns the right to lots of different Godzilla characters. The results of that partnership are Godzilla Series Monster cards.

These are alternate art cards for 19 creatures from Ikoria. Each are features a different Godzilla with an alternate name. The actual card name is written below the Godzilla name.

How Many MTG Godzilla Cards Exist?

There are 19 different MTG Godzilla cards. They are separated in three different groups, depending on where you can get them. The groups are:

Let’s take a look at which cards belong to which group and where you can get them.

The following fifteen (15) cards belong to the Core Series. They can be found in:

This card also has an alternate alternate version. Magic cards are made a long time before they actually get printed. This card was originally called Spacegodzilla, Death Corona, after the Spacegodzilla’s weapon Beam Corona. Due to the recent pandemic, this name was inappropriate, and was therefore changed. You can find the official statement here.

The name was changed to Spacegodzilla, Void Invader on Arena and on all printings except the very first one. The first printing has a bit higher of a price because of its rarity and collectability.

Ghidorah, King of the Cosmos

The following three (3) cards are exclusively printed only in Japanese. These Japanese variations were supposed to appear in boosters from all languages – but due to internal error, they appear only in the Japanese boosters. This was not intentional, as Wizards explained here.

However, if you’re buying English or French Collector booster from your local game store, they might be able to provide additional copies of these cards for free. Check with your store first, as the amount of cards they’ve received may vary.

There’s exactly one Buy-a-Box promo card. It’s Godzilla, King of the Monsters. The fun thing about it is that the card actual name is Zilortha, Strength Incarnate, although there isn’t a card with non-Godzilla art.

If one day reprint of this card happens in a regular set, it would be called Zilortha. But for now, there’s only Godzilla, King of the Monsters.

This is actually important for cards like Tamiyo, Collector of Tales, where you need to name a card. If you’re playing on Arena, you’ll have to name the actual card, even though you have a Godzilla-style card in your deck.

Godzilla, King of the Monsters

How to Get Godzilla Cards on Arena?

There are different ways of getting Godzilla alternate arts on MTG Arena. The first options was to preorder packs, before Ikoria release, but we’re already past that. However, you can still get them in two other ways.

You can buy multiple Packs with Gems in the Store. Go to Store and select Packs tab. When you get to Ikoria packs, you’ll see that you can get a certain amount of alternate arts depending on how many packs you purchase at once.

You’re always paying 200 Gems per pack, no matter how many you buy. But you can get Godzilla styles this way. Remember, that these are not actual cards, you’re only getting the cosmetic, not the actual copy of the card.

You can also just craft Godzilla, King of Monsters by spending a mythic wildcard. This is the only one that you can craft and get an alternate style, because as we mentioned – that’s the only art for that card.

Another way of getting Godzilla styles is to play Ikoria Limited Events. There are three events, where you can earn them:

If you’ll be drafting make sure to read our Ikoria draft guide, so you’ll earn more wins and therefore more rewards. Each entry will grant you a one alternate art style. You can collect 18 styles (so everything except Godzilla, King of Monsters) by playing 18 events.

There are two more things we should mention. First, the styles have duplicate protection. You can’t get another style that you already have, and once you collect 18 of them, you won’t get additional ones.

Second, both ways of getting the styles are available only until May, 21st. After this, they won’t be available as far as we know. They might appear in the Store (maybe in Daily Deals) sometime in the future, but that’s just speculation. So if you want to get your styles on Arena, better hurry.

How to Get MTG Godzilla Cards in Paper?

We mentioned this before, but here’s a quick recap.

The other way is to buy an Ikoria Booster Box. Each box should contain one box topper. That’s a foil Godzilla style from the previously mentioned Core Series. If you’re buying the box at your local game store, you could also get a Buy-a-Box promo. Some online sellers also offer this promotion. Make sure to contact your seller beforehand if you really want to get the promo.

Of course, you can also just buy singles.

That’s all about MTG Godzilla cards. If you have any further questions, feel free to ask us in the comments below. If you’re looking for more highly sought collectable MTG cards, check this list of all MTG Collector Booster Boxes.

If you want more current news about Magic the Gathering, give us a follow on Facebook or Instagram. You’ll get access to fresh MTG spoilers, strategy guides, trivia articles and memes. Join us, we’ll be happy to have you.

Until next time, have fun and may you open your favorite Godzilla in your next booster!