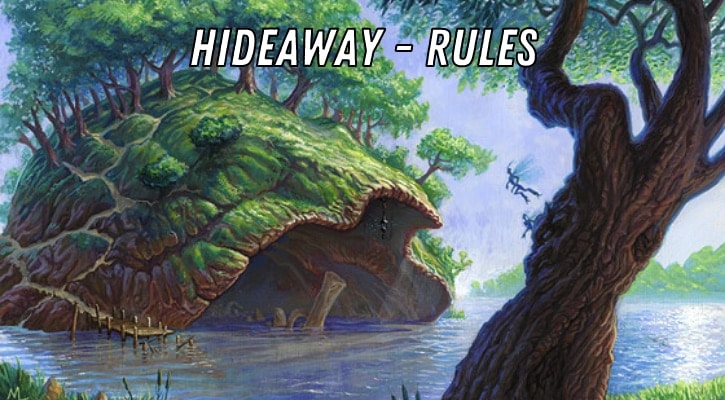 Hideaway is an MTG keyword ability introduced with Lorwyn. It recently returned with Streets of New Capenna. In this article, we’ll answer all the questions you might have about it, like:

How Does Hideaway Work?

Hideaway is an ability that can appear on a permanent card, and has a number next to it (let’s call it X). When your permanent with hideaway X enters the battlefield, you look at the top X cards of your library and exile one of them face down. You put the rest on the bottom of your library in any order.

So essentially, hideaway lets you store a secret card. Cards with hideaway also have another ability that allows you to cast the exiled card without paying its mana cost, if a certain condition is met. (However, that isn’t a part of the hideaway rules, which means that Wizards could theoretically make a hideaway card that works differently.)

When it enters the battlefield, you look at the top five cards of your library, and you choose one of them to exile face down. Let’s say that you select Progenitus. You put the other four cards on the bottom of your library in any order you want. That’s it for the hideaway ability.

The next ability triggers at your upkeep, and it allows you to mill three cards from your library. Then, if there are 20 or more cards in your graveyard, you can now cast the Progenitus – without paying its mana cost!

Can I look at the card that I exiled with hideaway?

Yes, they did. If you remember lands from Lorwyn (example: Shelldock Isle), they didn’t have the number next to the hideaway keyword. Another change was that before each permanent with hideaway entered the battlefield tapped. That’s also no longer the case.

Which card to choose with hideaway ability?

You’ll usually want to choose the most expensive card, as that one will probably be the most impactful one.

Does hideaway care about casting restriction?

No it doesn’t. Whenever the effect that lets you play the face-down card triggers, you get to play that card immediately. So you can cast a creature with this effect, even if it isn’t your main phase.

What happens with the face-down card if my hideaway card gets destroyed?

In that case, the hideaway card remains exiled face-down, and you won’t be able to play it.

A hideaway is (by definition) a place used for hiding in or as a retreat from other people. So you get to hide your card in a hideaway until you met the requirements to get it for free. The flavor makes perfect sense, especially in the mafia-inspired world of New Capenna.

In this section, we’ll talk about a couple of interactions that you can use when playing with hideaway cards.

Casting a Spell for Free

Note that even though you aren’t paying any mana, you are still casting the spell. This means that you’re going to get your cast triggers. So one of the best ways to get value out of your hideaway cards is to have expensive cards with cast triggers. Thankfully, there’s a creature type that’s known just for that.

Of course, that would be the Eldrazi. Even if you don’t cheat in Emrakul itself, other ones such as Ulamog, the Ceaseless Hunger are also backbreaking, especially since they’re free.

When you’re choosing which card to exile with your hideaway trigger, you should be especially careful if you’re playing tutors in your deck.

Let’s say that you exiled something like your only Reclamation Sage. Now you won’t be able to get it with your Chord of Calling. So keep stuff like this in mind if you’re only playing one copy of a card, or a singleton format like Commander.

Anyway, that’s all about the hideaway mechanic. Hopefully, you now know how it works, so you’ll be able to use it to your advantage.

If you like to crack packs, and you’d like to try your luck and perhaps open a card with hideaway, you could get a New Capenna Set booster box.

Furthermore, if you’d like to read more about this mafia-inspired set, you can check out the following articles:

Until next time, have fun and may you always get to play an expensive card for free with your hideaway cards.