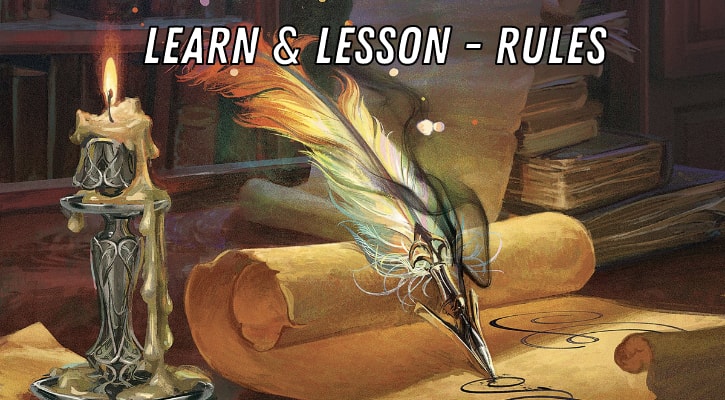 How Does MTG Learn Work?

Learn is a new MTG mechanic that appears on cards in Strixhaven. Spells with Learn work the same way as normal spells. They go on the the stack and they can be countered.

One new card in MTG Strixhaven with the Learn ability is Field Trip.

If Field Trip resolves you use its effect. First, you search your library for a basic Forest and put it onto the battlefield tapped. You then get to use the Learn ability.

Eyetwitch is another new card with Learn in MTG Strixhaven. It’s a creature, so everything that applies to creatures also applies to it. However, with Eyetwitch, the Learn ability occurs when it dies.

Hopefully those examples have cleared up when the Learn ability occurs. Now let’s look at what Learn actually does.

What Does Learn Do?

Whenever a Learn ability occurs, you have 3 options. You must choose one of the three:

You can choose any of the three, however, it will usually be best to reveal a Lesson card that you own from outside the game (from your sideboard) and put it into your hand. If none of the Lessons suit your needs, you can discard an ineffective card from your hand to draw a new card.

Finally, if none of these are a viable option for you, you can choose to do nothing.

Hopefully, you now have a clear understanding of the Learn mechanic and what it does. Now let’s look at the new card subtype that you can fetch with your Learn spells, Lesson.

How Does Lesson Work?

Lesson is a new MTG card subtype introduced in Strixhaven. For now, it appears exclusively as a subtype on Sorcery spells. Spells with the Lesson subtype are treated as normal Sorceries; the only difference is that they can be fetched from outside the game with the Learn ability. Here’s an example to clear things up:

One new sorcery with the Lesson subtype is Expanded Anatomy.

It does exactly what it says on the card, and has the Lesson subtype. This means that if you own the card outside the game, you may put it into your hand if you Learn. From your hand, you can cast it as a normal Sorcery.

Hopefully you can now understand MTG Lesson and how it interacts with MTG Learn. Our FAQ section should help to clear up any questions you still have.

What Does Outside the Game Mean for a Lesson Card?

This depends on what format you are playing. In a casual game of MTG, outside the game means from anywhere in your collection. So you can simply grab a Lesson from your binder.

In a competitive game of MTG, a Lesson needs to be included in your sideboard for you to able to get one. Same is true for all the games on Arena or Magic Online.

Can I Include Lesson Cards in my Main Deck?

Yes, you can still include cards with the Lesson subtype in your main deck. However, you will not be able to fetch them from your library with Learn cards.

Can I get a Lesson From ‘Outside the Game’ if it’s in Exile?

No. Exile is considered a zone within a game, so you can’t fetch a Lesson from exile, since it isn’t actually outside the game.

Can I get a Lesson with Learn from Outside the Game in Commander?

Technically, the answer is no. Wizards of the Coast released an official statement, stating that in constructed formats without sideboards, you can only ‘loot’ (draw to discard a card) or do nothing.

However, your playgroup might allow you to have a small ‘wishboard’ of Lessons in Commander, as it would make games more fun and interesting.

The flavor of Learn and Lesson cards in Strixhaven: School of Mages is quite simple. Being one of the most academically intelligent universities in the multiverse, students on Strixhaven are constantly Learning new Lessons.

The Learn mechanic and Lesson subtype represent this.

Retriever Phoenix is one of the new cards that features the Learn mechanic in Strixhaven. In addition to this, Retriever Phoenix also has a unique interaction, giving your cards with Learn a fourth optional ability.

When you Learn, while Retriever Phoenix is in your graveyard, you gain the option of returning the Phoenix from the ashes of your graveyard back to the battlefield. If you do this, you don’t get a Lesson from outside the game.

An interesting consideration with Lesson cards is the space they occupy in a player’s sideboard (for competitive play). This poses a deckbuilding challenge, as players will have to build an optimized sideboard balancing different matchups and Lessons that they can grab.

This mechanic is also one of the reasons why MTG Arena is decreasing the number of sideboard slots in the best-of-one matches from 15 to 7. In best-of-one you’d only need sideboard for cards like lessons. With 7 slots only, you’ll actually have to make some decisions, instead of just jamming every lesson in there.

Thanks for reading about the Learn mechanic and Lesson subtype. Hopefully you now have an A+ grade understanding of how Learn and Lessons work, and how to use them to your advantage in game. If you still have questions about Learn and Lessons that you’d like answered, make sure to ask in the comment section.

Until next time, and keep on Learning!

6 thoughts on “MTG Learn and Lesson – Rules and Interactions Explained”