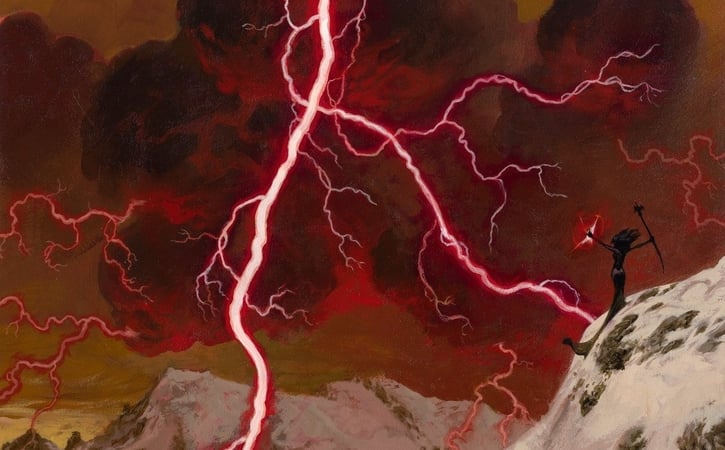 Welcome to the first installment of Card in Focus, a series of articles where we talk about the most iconic cards, their history, interesting tidbits and more. We’re starting off with the best burn spell of all times – Lightning Bolt.

This powerful spell has been around for a long time, so we’ll take a look at its history, trivia and art variations. Finally, we’ll wrap it up with a sample decklist. Let’s get to it.

Lightning Bolt was first printed way back in Alpha, in 1993. It was just as effective as it’s today, if not even more, since the creatures were worse.

It was reprinted over 20 times, but it’s still worth at least a dollar or two, because it’s always playable in every red deck.

Four of One Card Rule

At the Magic’s inception, there wasn’t a rule that you can only have four copies of the same card in your deck. So you can imagine how that quickly become broken.

One of the early successful decks contained 40 Lighting Bolts and 20 Mountains. So to keep things like this from happening, Wizards made a new rule: Each deck can contain a maximum of four cards with the same name (with the exception of basic lands).

Since the card was around for a very long time, it went through numerous wording changes. They are listed from oldest to newest here:

Despite the wording changes, the card always did the same thing – 3 damage anywhere.

In 1995, Lightning Bolt appeared in the Fourth Edition. After that it didn’t appear in a regular set for a very long time. It was widely considered too strong for the Standard format.

However, 14 years later, in 2009, it was reprinted in Core Set 2010. Players were both surprised and delighted by this reprint. Wizards anticipated that, and referenced it in the flavor text.

The sparkmage shrieked, calling on the rage of the storms of his youth. To his surprise, the sky responded with a fierce energy he’d never thought to see again.

If you’re a newer Magic player, it can quickly become hard to follow everything a more enfranchised player is saying. Here is just a small part of MTG jargon, based on this burn spell.

That’s also true at the time of writing this article, in October 2020, according to the Goldfish data. So even after 27 years, the Bolt is still going strong.

Besides the two regular versions you saw above, there are also a bunch of alternate art versions of Lightning Bolt.

Secret Lair: Mountain, Go had not one, but four different artworks for this powerful red instant. Players could buy it on Wizard’s official Store in the summer of 2020.

One of them was also featured as a sleeve on Arena, which you can buy here.

Lightning Bolt also has a promo card. Player could acquire it at Magic Fest Events in 2019.

Wizards of the Coast used to run the Magic Player Rewards program between 2001 and 2010. Players were rewarded for in-store play with promos that Wizards actually mailed to them.

One of the promos was also a textless Lightning Bolt, that you see below.

A ton of different decks use Lightning Bolt. From burn decks, to red control decks. Here’s just one example of a deck that utilizes this red instant in Modern. Shuaneehog played this particular deck was to a 5-0 finish in an MTGO League.

That’s it for our first Card in Focus article. Hope you enjoyed reading about Lightning Bolt. If you have any suggestions about this series, let us know in the comments below. Which cards would you like to know more about? What information should we include?

If you’re looking for More MTG articles, maybe some of the following will be interesting to you:

Until next time, have fun and may you always topdeck a Bolt, when you need it.