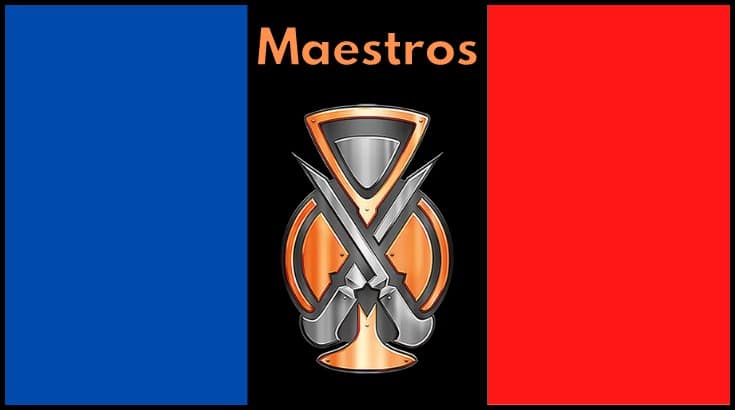 Are you looking for information about the MTG Maestros, one of the five New Capenna families? If so, you’ve come to the right place, as today we’ll talk about:

Maestros is a three-color combination, like the other Capenna families. Its colors are:

Maestros’ symbol consists of two crossed blades in front of a stylized goblet.

Their motto is: “Crime is an art form.”

Maestros are the old-money Vampires, who have been around for a very long time. In this time they gathered a lot of power, wealth and influence. They use that to get and enjoy finer things in life, and you can probably imagine why they’d want to keep it that way.

So, they maintain a public front, in which they present themselves as art aficionados, who simply want to preserve the art and culture of the Old Capenna. However, they are actually elite assassins, who won’t stop at nothing to get what they want.

You probably don’t want to have an item that they desire, if you’re living in New Capenna.

Each family has a signature mechanic. Right now, we don’t know what mechanic will belong to Maestros. Given that they’re a family of Assassins, there might be something based around killing creatures, like Morbid.

On the other hand, they could also have something to do with Treasures, as they enjoy the finer things in life. This would also play nicely with various cards in Standard, which have synergies with Treasure tokens.

You might hear someone call this family by the name Grixis. Why is that? Because once upon a time (in 2008), there was another set, which also featured the same three-color combinations as New Capenna. The set was Shards of Alara and the Blue-Black-Red faction was Grixis.

This name was around for a long time, and it’ll probably still be used for this color combo, even post New Capenna.

In this section, we’ll post some of the most iconic Maestros cards. Since New Capenna spoilers haven fully started (we only got a small teaser), there’s currently just one card here. Nevertheless, it’s a very good one:

Xander’s Lounge is one of the New Capenna Triomes, which completed the cycle from Ikoria. These lands are amazing! They see play in lots of formats (Standard, Commander, Pioneer, Modern…) and are bound to be heavily sought after.

You’ll surely find more iconic cards in the Maestros Commander precon. There’ll be one New Capenna Commander deck. This one is Blue, Black and Red and if we’ve learned anything from the previous Commander precons, it’ll be pretty fun to play.

If you’re a beginner or a casual player, and you just want to get a lot of cards in your favorite colors, then Theme boosters are a nice option. There are 35 cards in a single booster, most of them are commons or uncommons, with 1-2 rares or mythics.

The main benefit is that, they’ll all be in the colors that are marked on the pack. So, a Theme booster from Maestros will contain only cards in Blue, Black, or Red.

That’s all about Maestros, at least for now. Once more info becomes available, we’ll add it to the article. If you don’t want to miss it, you can follow us on Facebook or Instagram. There we post reminders for new articles, Magic memes and new MTG Arena codes.

If you’d like to read more about New Capenna, check the following articles: