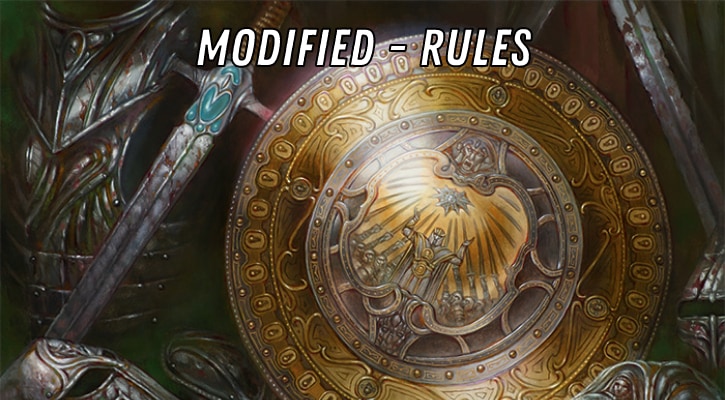 Modified is a new MTG status that a creature can have. It was introduced with Kamigawa: Neon Dynasty. In this article, we’ll talk about everything you need to know about it, including:

Note that we don’t know everything about the mechanic so far, so there might be some changes to this article in the upcoming weeks.

How Does MTG Modified Work?

It’s pretty simple. Your creature is considered modified, if it:

A creature doesn’t need to have to meet all three conditions. One is enough for a creature to become modified.

Let’s take a look at an example or two.

It’s quite a simple card. Target creature get -2/-2 for two mana at instant speed. However, it gets better if you have some modified creatures in play. Let’s say you have a creature with a +1/+1 counter in play, and another one that’s equipped. In that case, Lethal Exploit is able to take down a creature with toughness 4, as it now gives -4/-4.

So if you have any creature that’s equipped, enchanted, or has counters, you get a better removal spell.

Chishiro, the Shattered Blade, is the face commander of Upgrades Unleashed, a Commander precon. If you want, you can order one on Amazon.

Does a creature count as modified if my opponent enchanted it?

No, it doesn’t. Let’s say your opponent played a Pacifism on your Colossal Dreadmaw. This Dinosaur is not a modified creature because of that.

Does a creature count as modified if my opponent put counters on it?

Yes, it does. If a creature has any kind of counters, it’s considered modified. So if your opponent used Fume Spitter to put a -1/-1 counter on your Colossal Dreadmaw, the Dinousaur is now considered a modified creature.

What’s the easiest way to get a modified creature?

That depends on your deck. A lot of decks might have a way to get some incidental +1/+1 counters on creatures, so that’s one option. If your deck has Equipment synergies, that’s one possible way to get a modified creature, and so on.

If you have a question about the mechanic that we didn’t answer, let us know in the comments below. We’ll get back to you as fast as we can.

To modify means to make partial or minor changes to something. Auras, counters, and equipment certainly change creatures, so the flavor is pretty straightforward here. Although, there’s nothing minor about something like Eldrazi Conscription, even on a simple Squirrel.

There aren’t that many weird interactions with coven. Nevertheless, there are a couple of interesting ones.

It might be beneficial if you can get a modified creature out of nowhere, when your opponent isn’t expecting it. That can be most easily done by auras with flash, like Feral Invocation, or with instants that give counters, for example Dragonscale Boon.

However, if you’re building a deck around modify, and you play a lot of equipment, you might consider Sigarda’s Aid, which gives all of your auras and equipment flash.

Additionally, you get the first equip for free, which really helps with some high equip costs. (Looking at Colossus Hammer.)

MTG Modified on a Test Card

Here’s an interesting tidbit about MTG modify. The word actually didn’t premiere in the new Kamigawa Set, but in the Mystery Booster, on a test card.

Louvaq has protection from modified creatures. However, in the reminder text, you’ll notice that modified creatures had different criteria. Any creature with changed power, toughness, or ability would be considered modified.

Since it was just a test card, it wasn’t an actual mechanic, so Wizards of the Coast had a lot of freedom in changing the modified ability. They might have done this for various reasons, but the most likely one is, that the modify now works much more clearly.

Anyway, that’s all about MTG modified creatures. Hopefully, you now know how they work, and you’ll be able to use it to your advantage.

If you really like the modify mechanic, you can check our article about Kamigawa Commander decks. One of the decks has a commander that cares about the mechanic.

Until next time, have fun and may your creatures be modified in a beneficial way.