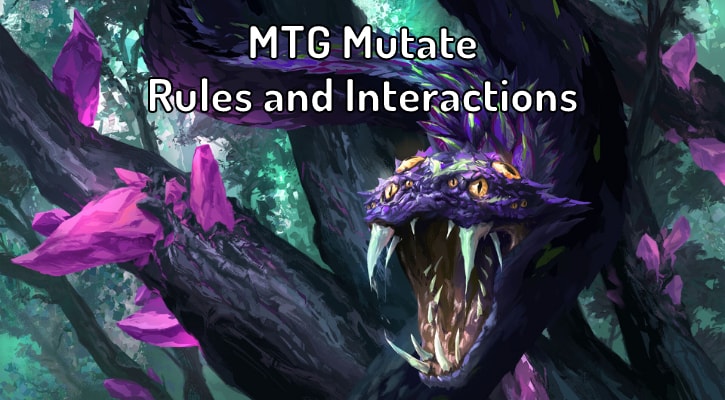 Mutate is an MTG mechanic that was introduced in Ikoria: Lair of the Behemoths. In this article, I’ll explain everything you need to know about the mechanic, including:

Let’s get into it.

How Does Mutate Work?

Mutate is an alternative casting cost that appears on creatures. You can still cast
creatures with Mutate for their normal casting cost if it suits you better.

That might sound complicated, but it isn’t actually too hard. Let’s look at an example.

Let’s say you’re mutating a Migratory Greathorn onto a Stonecoil Serpent with one +1/+1 counter on it.

Since Stonecoil Serpent is non-Human, it is a legal target for you to mutate onto. Let’s assume that Migratory Greathorn resolves. Great.

First, you have to choose which order you’ll stack the creatures. Remember, this new creature will have the power and toughness of the creature on top of the stack while retaining all its previous counters. So if we put the Migratory Greathorn on top, we get a 4/5 on turn 3, while putting the Serpent on top will result in a 1/1. The mutant creature also retains both creature’s abilities, so it still has reach, trample, and protection from multicolored.

Because this creature mutated, we will also get Migratory Greathorn’s triggered ability, which allows us to search for a basic land and put it onto the battlefield tapped. This ability will trigger regardless of the order that we stack the creatures.

Hopefully that example cleared up some basic questions. Now let’s move on to the FAQ.

Do Mutated Creatures Have Summoning Sickness?

What Happens if the Creature you are Mutating onto is Destroyed?

Sometimes the creature you are using as a Mutate target becomes an illegal target while your Mutate spell is on the stack. This will usually happen through being bounced to your hand or destroyed. If this happens, then the creature on the stack that you cast for its Mutate cost will still enter the battlefield. Just as a normal non-Mutant creature would.

What Happens if a Mutated creature is Destroyed?

Do I have to pay Commander Tax if I am casting my Commander for it’s Mutate Cost?

Can I Mutate Onto Creature Tokens?

Yes, you can Mutate onto Creature Tokens as long as they are non-Human. If the creature on top of your Mutate pile is a token, then the Mutated Creature is considered a Token.

What happens if I “cheat” a creature with mutate into play?

If you were to put a mutate creature into play with a card like Hunting Grounds, you couldn’t mutate it onto another creature. Why? Because you didn’t cast it for mutate cost, you just put it into play.

Hopefully this answers any other questions you had about Mutate. If you have more questions about Mutate, feel free to ask me in the comments, and I’ll do my best to answer as quickly as I can.

Ikoria is a world of monsters that are constantly trying to adapt to become the strongest. Mutate represents this in a game of Magic as your creatures evolve new power, toughness, and effects to grow stronger.

Being a unique mechanic, there are also many unique interactions with Mutate. Let’s take a look at some of the more crazy ones.

A Mutated Commander and Leadership Vacuum

One of the craziest interactions with Mutated Commanders is when one is returned to the Command Zone by a Leadership Vacuum.

If this happens, then not only the Commander is returned to the Command Zone — all the other cards that were mutated with it are returned too!

Kiki-Jiki is an enabler of combos across many formats, and it also combos with any of the Non—Legendary Mutate Creatures that Ikoria has to offer.

If you mutate any of these creatures on top of Kiki-Jiki, then Kiki-Jiki will no longer be a Legendary Creature, but will still have its old effect. You can then tap Kiki-Jiki, making a copy of itself.

Because the copy has all of Kiki-Jiki’s abilities, you can repeat this process infinite times, making infinite copies of the mutated Goblin Shaman. You can use this in combination with a card like Impact Tremors for a crazy combo win!

Thanks for reading about the Mutate Mechanic. Hopefully you now have a clear understanding of how Mutate works, and how to use it to your advantage in game. If you still have questions about Mutate that you’d like answered, make sure to ask in the comment section.

Happy mutating, and until next time!