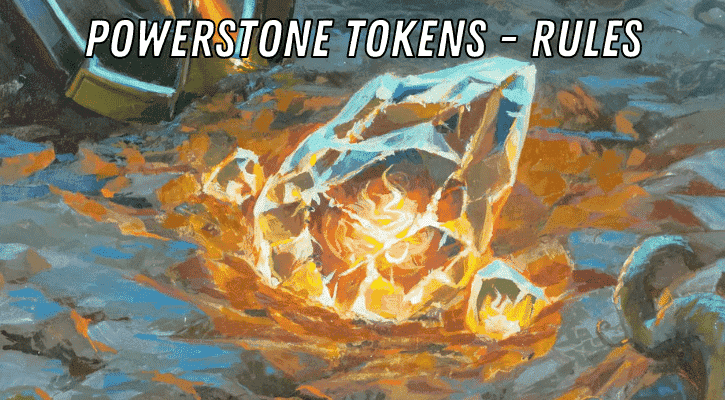 Powerstone tokens are new MTG tokens, first introduced with Dominaria United, but they gained much more support in The Brothers’ War. In this article, we’ll talk about everything you need to know about them, including:

There are a lot of interesting things to discuss, so we better get right to it.

How Does Powerstone Token Work?

Various cards can create Powerstone tokens. Here’s how they look like:

Powerstone token is an artifact token, with subtype Powerstone. You can tap it to get a colorless mana, but it can’t be spent to cast a nonartifact spell. Everything else is a fair game.

Here are some examples of cards that make Powerstone tokens.

First up, here’s Fallaji Excavation, a Green common from The Brothers’ War.

Some cards, especially those of higher rarities, can be more complex. One such example, would be The Mana Rig.

With this mythic in play, you’ll get a tapped Powerstone token, whenever you cast a multicolored spell. It also has an activated ability, which lets you spend mana from your Powerstones. Such cards are particularly useful.

Here you’ll find some frequently asked questions about Powerstone tokens. If you still won’t find an answer to your problem, let us know in the comments below, and we’ll get back to you.

Do I need to sacrifice a Powerstone token to tap it for mana?

No, these don’t work like Treasure tokens, but they stick around, and you can use them multiple times during the course of the game.

Do Powerstone tokens have summoning sickness?

No, they don’t. You can use a Powerstone token on the turn you play it. However, all cards that make them, put them into play tapped, so you won’t be able to use them without having a way to untap them.

Can you pay for activated abilities with Powerstone tokens?

Can you pay kicker cost of nonartifact spells with Powerstone tokens?

No, you can’t. You are still paying for a nonartifact spell, when you pay its kicker cost.

Can you pay Commander Tax with Powerstone tokens?

Only if your Commander is an artifact.

Powerstones were present in Magic’s lore for a very long time. Worn Powerstone was first printed in Urza’s Saga back in 1998. In the lore, Powerstones were mysterious gems used to power up various Thran devices.

They were used by the brothers Urza and Mishra, and they had various power levels. Mightstone and Weakstone were two halves of one very powerful Powerstone. They were also depicted in a non-token card, which also has the Powerstone subtype.

The token Powerstones that we’re talking about in this article are weaker – both in lore and in gameplay.

In this section, we’ll talk about some interesting interactions that can come up with Powerstones.

Pay for All Kinds of Things

When you first read a Powerstone token, you might think that you can only cast artifact spells with its mana. However, the mana just can’t be used on a nonartifact spell. There are still plenty of other ways that you can use it.

Here are some things that you can use mana from Powerstones on:

As you can see, there are a lot of effects that can use the mana from Powerstone tokens on. There’s also one additional trick that can be useful.

The trick that you can do is to “launder” the mana you get from Powerstone tokens, with cards like Prophetic Prism, or any Signet. You can use the mana you get this way for anything you want, including nonartifact spells.

You can find cards that let you filter your mana with this Scryfall search. One additional card that works in the similar vain is Inspiring Statuary.

Powerstone tokens can certainly be useful in draft, but not without building around them. If you want to maximize the value you get from the Powerstones, you’ll want to include expensive artifact spells, or cards with activated abilities. Cards that let you sacrifice permanents for value, they also work nicely with Powerstones.

In the Brothers’ War draft, you’ll probably want to pair these tokens with creatures with prototype. Those are expensive artifact creatures, that can also be cast for less mana.

How good Powerstone tokens are in any given draft format, really depends on the other cards that are in that format. They are impossible to evaluate by themselves, but it looks like they have enough support in The Brothers’ War, that they’ll perform well.

Anyway, that’s all about MTG Powerstone tokens. Now you know how to work, and how you can use them to their fullest. Hopefully, this will help you win many games.

If you like Powerstone tokens, and would like to get some cards that make them, you can buy a Brothers’ War Set booster box.

If you want to explore what else you can find in these boosters, you can read these articles:

Until next time, have fun and may your Powerstone tokens bring you a ton of wins.